Time for an Update

Ive been a busy boy sorting a few head aches,starter motor hit the 2 1/2" downpipe so after a little advice I ended up with a XR2i starter. They are over an inch shorter so that clears, rad fitted and plumbed in, carbs and all relenvent parts fitted, exhaust manifold and downpipe finally on etc etc.
Monumental thanks to Jonny again who popped over and broke out the soldering iron, sorted out the electrical side of things.
I still have afew jobs ahead of me, exhaust, altenator, and other little issues to get gauges working but I hope nothing too taxing.
Anyway.... the bay so far...... 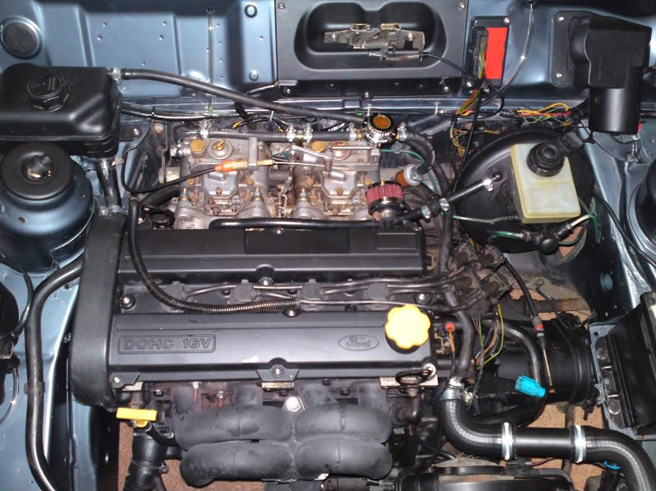 I've been working away in my spare time, fitting my fuel pump, alternator, finishing coolant hoses and trying to sort what I can before this Sunday.
Mr Jonny Stannard will make its last few tweeks then hopefully it should bark into life after a deadly silence of 5+ months. The custom exhaust may cause a few head aches being two and a half bore to a side exit but Jonny seems confident. I

7th March 2010 • 03:40AM
Loads of oil pressure, started first time!!
Had to fit the original sportex system as the Zak ghetto side pipe was just too much hassle and tbh i think I would have been pulled every day. Jonny welded the exhaust and its easily the best its ever fit, super close to the car yet no chance of catching the bottom.
Just one small leak from the thermostat housing to address and the linkage on the carbs need alittle fettle before it goes to the NMS but all in all Im one happy chappy.

Unhappy chappy since the side exit exhaust was'nt going on without a fight. 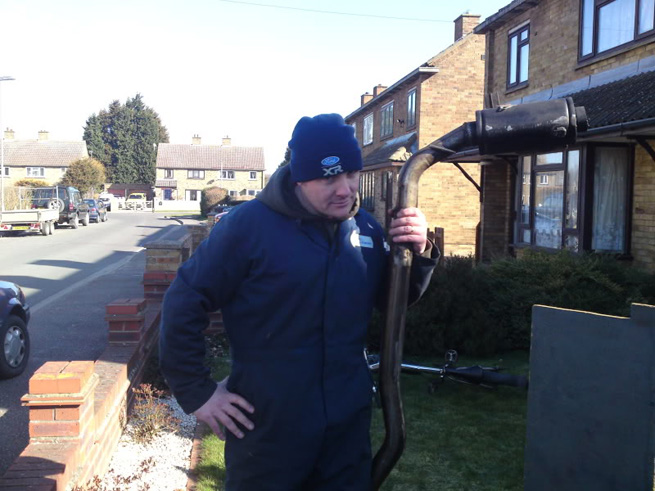 And midway through the exhaust fit up

Looks like its on the rollers in the next two weeks.

Its now booked in for a rolling Road tune on Tuesday 23rd March. If this highlights any issues it gives me over a week to sort them before its on the road 1st April. Shakedown! I get it on the road on the Thursday, bit of a shakedown then first thing friday I take the family away for easter so won't be able to drive it, dropped a bollock there methinks.

Finally got it finished yesterday, quick spanner check and the first drive. All be it just to the top of the road and back to check I had all gears and nothing out of the ordinary.
Didnt give it beanage but it felt smooth enough with no flat spots.
Off to have the carbs set up tomorrow and double check everything.

The engine has been tuned.
After Jonny and Nath meeting at costa del BRIGHTs the car was eventually loaded onto the trailer and taken to Randell Racing after a word from Captain Mint.
On arrival we was met by Minty , I couldnt believe the set up and the cars sat there, Anglias, Mk1 and 2 Escorts, 205GTi's all awaiting some Randell loving.
Inside was a mix of bare shells to almost finished National Hotrods.
Once my car was unloaded and taken into the workshop onto the rollers. Kev then went over it with a fine tooth comb checking for problems, thankfully nothing too worrying was noticed. After a quick run ap to check it sat straight and true on the rollers it was strapped down to the floor so not to exit through the wall at Mach 8.
He then set the idle to a much more reasonable level and went throught the entire rev range in stages checking fueling etc before pulling the jets out to replace for more benfitial items. After a run up it was then noticed due to a stop on the floor I was'nt getting full throttle so after a talking to with a hammer we got W O T.
The final figure came out at 133bhp. It appears the ESC unit and exhaust manifold was restricting it and if both items replaced more power would be easily achieved. When it was taken from the rollers the note from the exhaust sounded 10 times 'cleaner' and it idled so much better.
Just a gearbox seal to address and it will be on the road next week. :D

Thanks to Minty for putting me in contact with Randell, Jonny for his knowledge and his enthusiasm and Nath and steve for the continuous pi55 taking last night.

Although Im a little gutted over the power figure, Ive not driven it properly and its got around 50bhp more than it had so I'm sure it will be a scream to drive.

I finally got the last few bits fitted, strut brace, catch tank etc. The gearbox and water leaks all fixed and the carbs only dripping but nothing major. I drove it around here and there last week just keeping my eye on the gauges and taking it easy.

Saturday Nathan came round so I took him out. It was the first time I