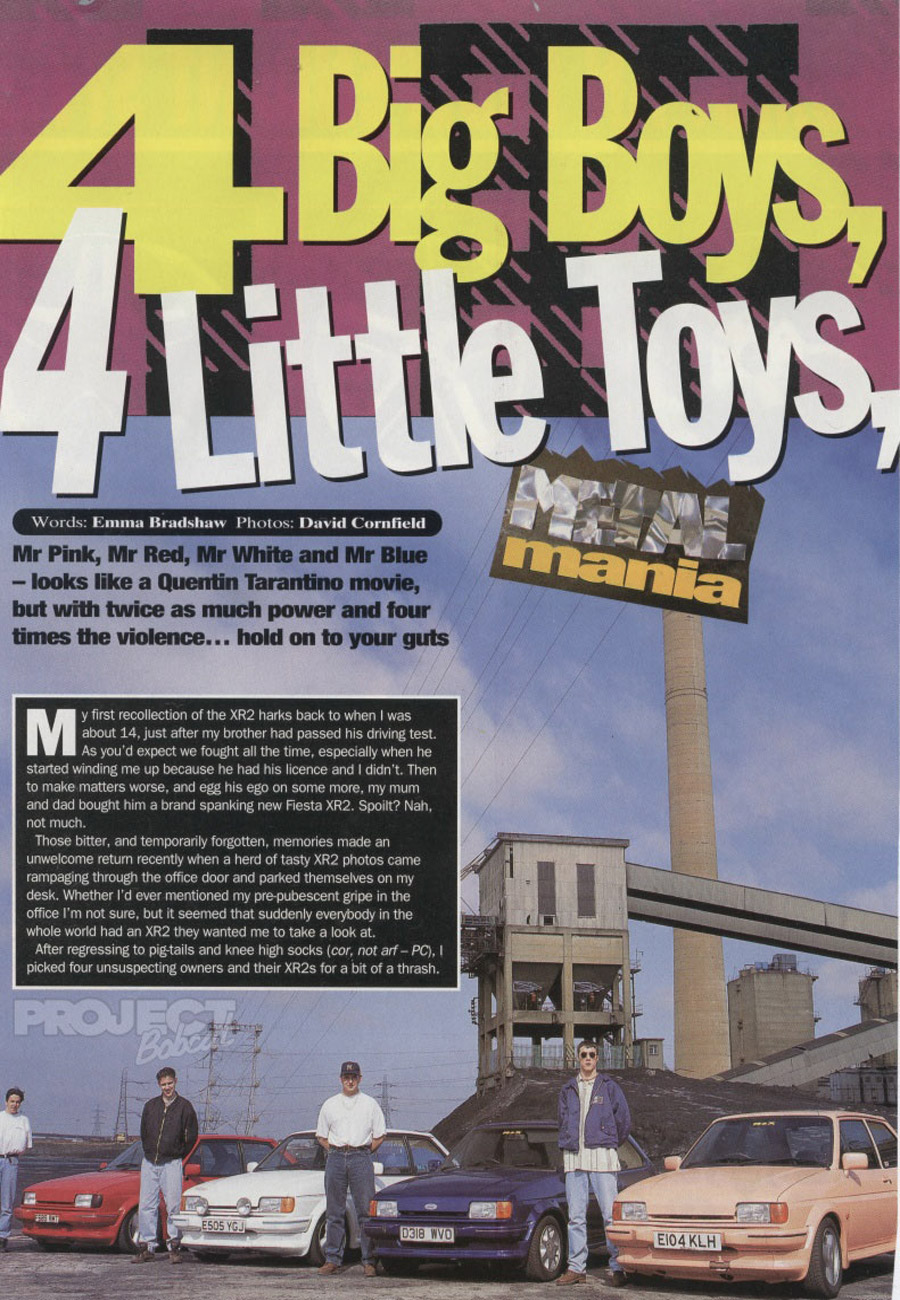 Mr Pink, Mr Red, Mr White and Mr Blue - looks like a Quentin tarantino movie, but with twice as much power, and four times the violence...hold on to your guts.

My first recollection of the XR2 harks back to when I was about 14, just after my brother had passed his driving test. As you'd expect we fought all the time, especially when he started winding me up because he had his license and I didn't. Then to make matters worse, and egg his ego on some more, my mum and dad bought him a brand spanking new Fiesta XR2. Spoilt? Nah, not much.

Those bitter, and temporarily forgotten, memories made an unwelcome return recently when a herd of tasty XR2 photos came rampagin through the office door and parked themselves on my desk. Whether I'd ever mentioned my pre-pubescent gripe in the office I'm not sure, but it seemed that suddenly everybody in the whole world had an XR2 they wanted me to take a look at. After regressing to pig-tails and knee high socks (cor,not arf - PC), I picked four unsuspecting owners and the their XR2s for a bit of a thrash.

In the red corner is Stephen Bolt, age 21, with the lowest XR2 of the day, which made at least one of our other XR2 owners green as hell, but I'm not going to tell you which one. On the modification front the only work Stephen's done on his engine is to add a full Jetex exhaust system, boosting power by a few extra brake, over the standard 96bhp.

By the looks of things, Stephen is more of an interior man. if you take a goose at the Tech Spec you'll notice that he's fitted a seriously large amount of ICE... but I'm sorry to say it doesn't make him cool. Oh no, not at all. And he's probbaly not going to thank me for saying it, but at one point during the day, all his stereo equipment ceased to work for some unknown reason. It started up again after the fuses were replaced, but it makes me feel better to tell you about it. He's also fitted Recaros, from the Fiesta Turbo, and trimmed the rear seats and door panels in matching loin cloth. Sad to say Stephen also bunked off college to appear in this feature, but it's okay because I've sent a letter to his principal grassing him up. He's certainly going to have to do some grovelling to get his place back on the course. Cheers!

Simon's car is really the cat among the pigeons. From the outside it looks like a standard XR2 but underneath the gleaming bonnet lies a monster engine - anyone challenging him at the lights, be warned.

Simon originally paid just £350 for the badly damaged, standard XR2 with the intention of repairing the car through his father's company. After sorting the panels and respaying the whole caboodle from engine bay to wing mirrors, Simon came across a 1.8EFI 16V Zetec egnine from a written of RS1800i.

Working with his dad, he modified everything, from engine mounts and feul tank to the wiring loom and finally the exhaust, to make sure the engine fitted the XR2 shell. Simon then went on to fit the XR2i transmission, as well as lowering the car using SPAX springs and Monroe Gasmatic shocks, before adding a set of Fiesta RS seven spokes.

Styling mods include electric windows, central locking and the removal of all door locks, for a cleaner look.

Inside, Alpine is the word with a head unit, 200W amp, 8in subs, mids and tweeters, plus a graphic equaliser which amuses the drive ron slow roads. Simon has also fitted a Scorpion alarm and seperate immobiliser for peace of mind.

The car's output is estimated at about 150bhp but Simon is a modest chap and admitted to a few initial teething problems. I'm sure when ironed out and the car gets to a rolling road, the power figure might even surprise him. Best of all, hos car's a fine manly shade of Ford Imperial Blue, and not pansy pink.