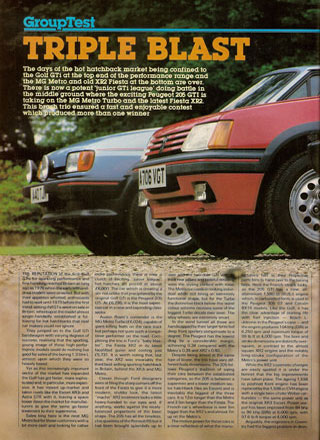 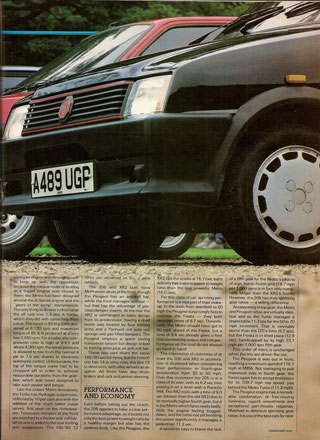 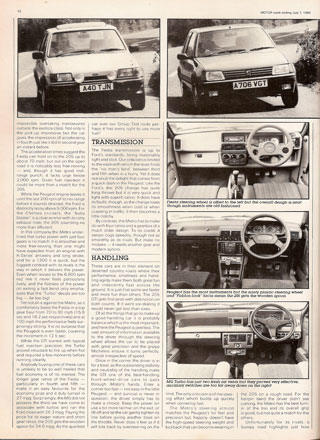 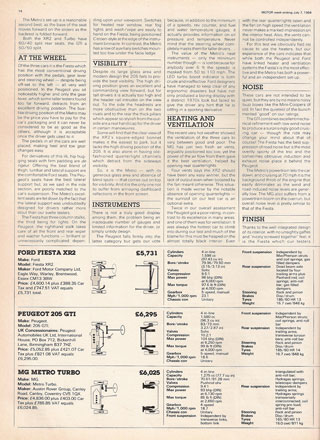 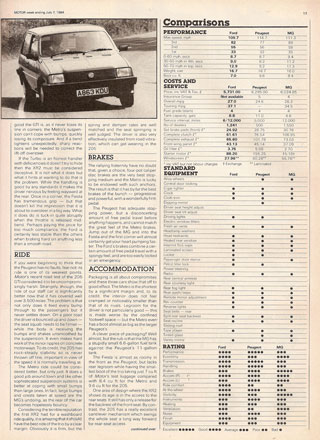 The days of the hot hatchback market being confined to the Golf GTi at the top end of the performance range and the MG Metro and old XR2 Fiesta at the bottom are over. There is now a potent 'junior GTi league' doing battle in the middle ground where the exciting Peugeot 205 GTi is taking on the MG Metro Turbo and the lates Fiesta XR2. This brash trio ensured a fast and enjoyable contest which produced more than one winner.

The REPUTATION of the first Golf GTis for sparkling performance and fine handling reached Britain as long ago as 1976 when the early lefthand-drive models were unveiled. But with their appetites whetted, enthusiasts had to weight until 1979 before the first trend-setting rhd GTis went on sale in Britain, whereupon the model almost single-handedly established a following for hot hatchbacks that rival car makers could not ignore.

They jumped on to the Golf GTi bandwagon with varying degrees of success, realising that the sporting, young image of these high-performance models could do nothing but good for sales of the boring 1.3 litre L version upon which they were so heavily based.

Yet as this increasingly important sector of the market has expanded the Golf has got faster, more sophisiticated and, in particular, more expensive. It has moved up-market and taken rivals like the Escort XR3i and Astra GTE with it, leaving a space lower down the market for manufacturers to give the same go-faster treatment to their superminis.

Sales king here is the neat MG Metro but for those customers with a bit more cash and looking for rather more performance there is now a clutch of exciting "junior league" hot-hatches all priced at about £6,000. The car which is creating a stir not unlike that precipitated by the original Golf GTi is the Peugeot 205 GTi. At £6,295, it is the most expensive car in a new and expanding class sector.

Austin Rover's contender is the MG Metro Turbo (£6,024), capable of giant-killing feats on the race track but perhaps not quite such a competitive performer on the road. Completing the trio is Ford's "baby blaster", the Fiesta XR2 in its latest facelifted guise and costing just £5,731. It is worth noting that, last year, the XR2 was invariably the third best-selling sporting hatchback in Britain, behind the XR3i and MG Metro.

Clever though Ford designers were at filing the sharp corners off the front of the Fiesta to give a more modern, stubby look, the latest "macho" XR2 treatment looks a little heavy-handy to our eyes and, if anything, works against the nicely balanced proportions of the basic shape. The 205 has all the timeless, chic qualities of the Renault R5 but it has been brought splendidly up to date and the two-door GTi with its thick rear pillars and tasteful detailing wins the styling contest with ease. The Metro succeeds in looking individual whilst still being an extremely functional shape, but for the Turbo the distinctive black below-the-waist colour scheme recieves some of the biggest Turbo decals ever seen. The alloy wheels are extremely smart.

In the wind tunnel all three are handicapped by their larger tyres but deep front spoilers compensate to a degree. The Peugeot has the lowest drag by a considerable margin, achieving 0.34 compared with the Metro's 0.39 and XR2's 0.40.

Despite being aimed at the same type of buyer, the trio have very different body dimensions. The 205 follows Peugeot's tradition of sizing their cars between the established categories, so the 205 is between a supermini and a lower-medium sector hatchback (like an Escort) and is inevitably the biggest of the three cars. It is 12in longer than the the Metro and 2.5in longer than the Fiesta. The French car's wheelbase is over 5in bigger than the XR2's and almost 7in up on the Metro's.