A buyers guide the the Ford Fiesta Mk2 XR2 taken from a 2001 copy of Performance Ford Magazine. 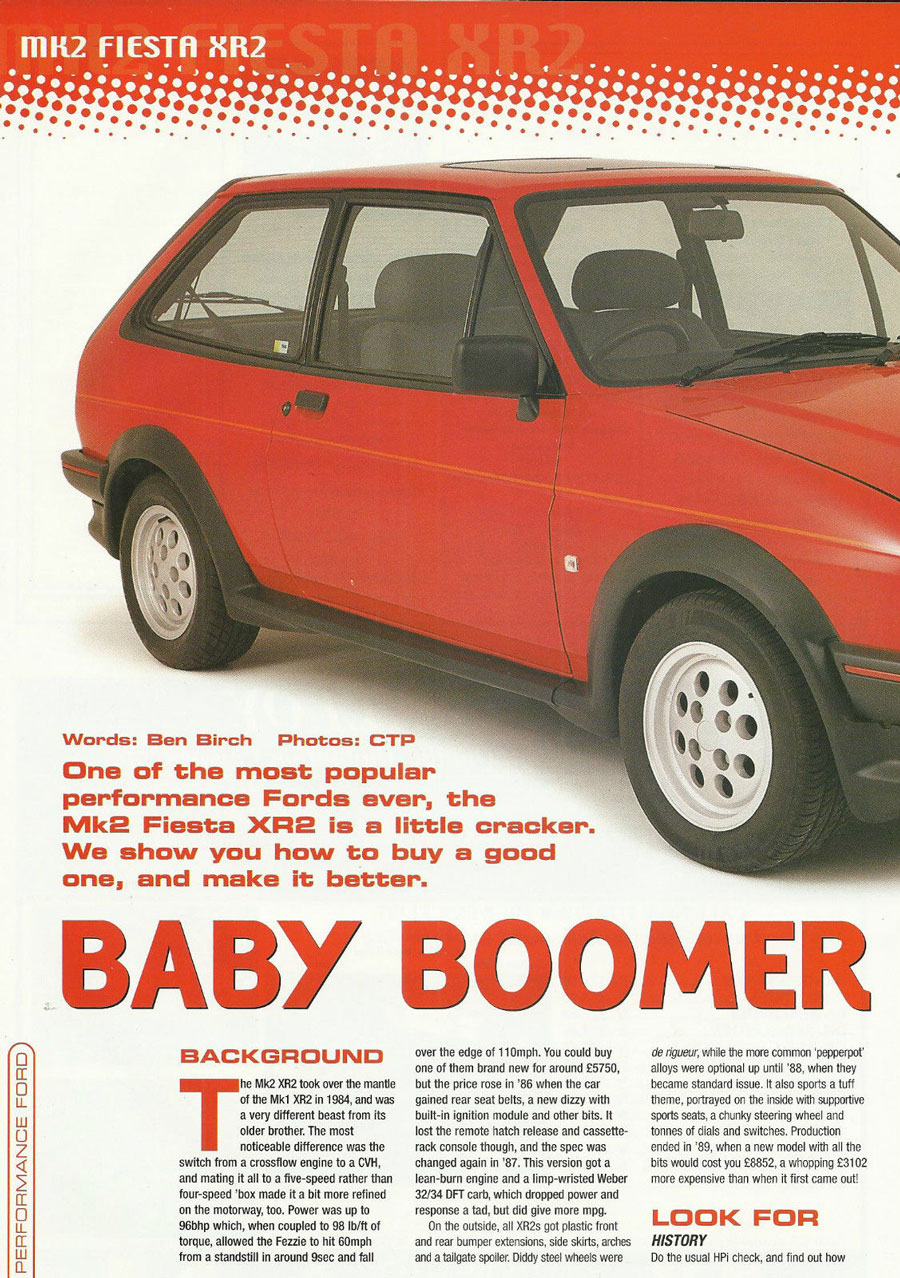 One of the most popular performance Fords ever, the Mk2 Fiesta XR2 is a little cracker. We show you how to buy a good one, and make it better.

The MK2 XR2 took over the mantle of the Mk1 XR2 in 1984, and was a very different beast from its older brother. The most noticeable difference was the switch from a crossflow engine to a CVH, and mating it all to a five-speed rather than four-speed 'box made it a bit more refined on the motorway too. Power was up to 96bhp which, when coupled to 98 Ib/ft of torque, allowed the Fezzie to hit 60mph from a stranstill in around 9sec and fall over the edge of 110mph/ You could buy one of them brand new for around £5750, but the price rose in '86 when the car gained rear seat belts, a new dizzy with built-in ignition module and other bits. It lost the remote hatch release and cassette-rack console though, and the spec was changed again in '87. This version got a lean-burn engine and a limp-wristed Weber 32/34 DFT carb, which dropped power and response a tad, but did give more mpg.

On the outside, all XR2s got plastic front and rear bumper extesnions, side skirts, arches and a tailgate spoiler. Diddy steel wheels were de riguer, while the more common 'pepperpot' allloys were optional up until '88, when they became standard issue. It also sports a tuff theme, portrayed on the inside with supportive sports seats, a chunky steering wheel and tonnes of dials and switches. Production ended in '89, when a new model with all the bits would cost you £8852, a whopping £3102 more expensive than when it first came out!

HISTORY
Do the usual HPi check, and find out how many owners it's had. It can be well worth getting hold of the previous owners and asking them about the car when they had it, as a lot of little dark secrets are more likely to come out now the car isn't theirs!

BODY
Oh, dear. The main thing to look for on an old Fiesta is the dreaded rot. This springs up all over the place, so here's the list: around and behind the plastic body kit, in the sunroof rain channels, the area of floorpan above the rear axle, around the headlights, the wing edges and bonnet lip, the front valance, where the front wings join the scuttle panel, the welded seam inside the rear arches, the spare-wheel well, door sills, and door bottoms. Phew!
Check around the window and door seals for any signs of overspray, and check down the sides of the car for panel alignment - many XR2s have been smacked, and if it has just walk away. Another bad sign is the bonnet not lining up properly, as it's pretty much impossible to get it to sit right once the car's had a front-ender. All Ford panels carry a minute oval Ford stamp and a date code punched into them, and it follows a date format of DDMMYY, e.g: 16 December 1988 would appear as 161288. If it hasn't got it it's not a Ford panel, so draw your own conclsuions.

ENGINE
Tough as old boots, the CVH. However, there are a few troublesome areas, starting with the cam belt. Ford recommends a change every 36000 miles, so ask the seller when the last one was, as it's not uncommon for valves and pistons to meet in a horrible mess.
Arrange to start the engine from cold, and if there's a puff of smoke on start up, you know the valve -stem oil seals are going or have gone. Not a big or expensive job, but should smoke persist under load when the car's warm then it's probably piston-ring wear - run away as it's bloody expensive!
If there's oil sitting on the gearbox below the distributor, it's probably because the 'O' ring is worn on the distributor shaft and requires a new dizzy. All the other tests apply, like checking for 'mayonaise' in the oil filler cap and airbox (could be a blocked breather but could also be a dead head gasket), listening....

Article incomplete, can you help us out with a scan of this magazine page? Please email info@projectbobcat.com if you can help.