We could keep this short and say rust occurs 'everywhere', but to give you something a bit more in-depth to read, we've put together a checklist. Depending on what the car has been through obviously affects where rust will star to occur, but here's a list of areas that are commonly prone to the tin worm. The common factor is anywhere where layers of metal are spot welded together, creating a potential water trap.

Pay attention to the area around strut tops and the top corners where it meets the bulkhead. 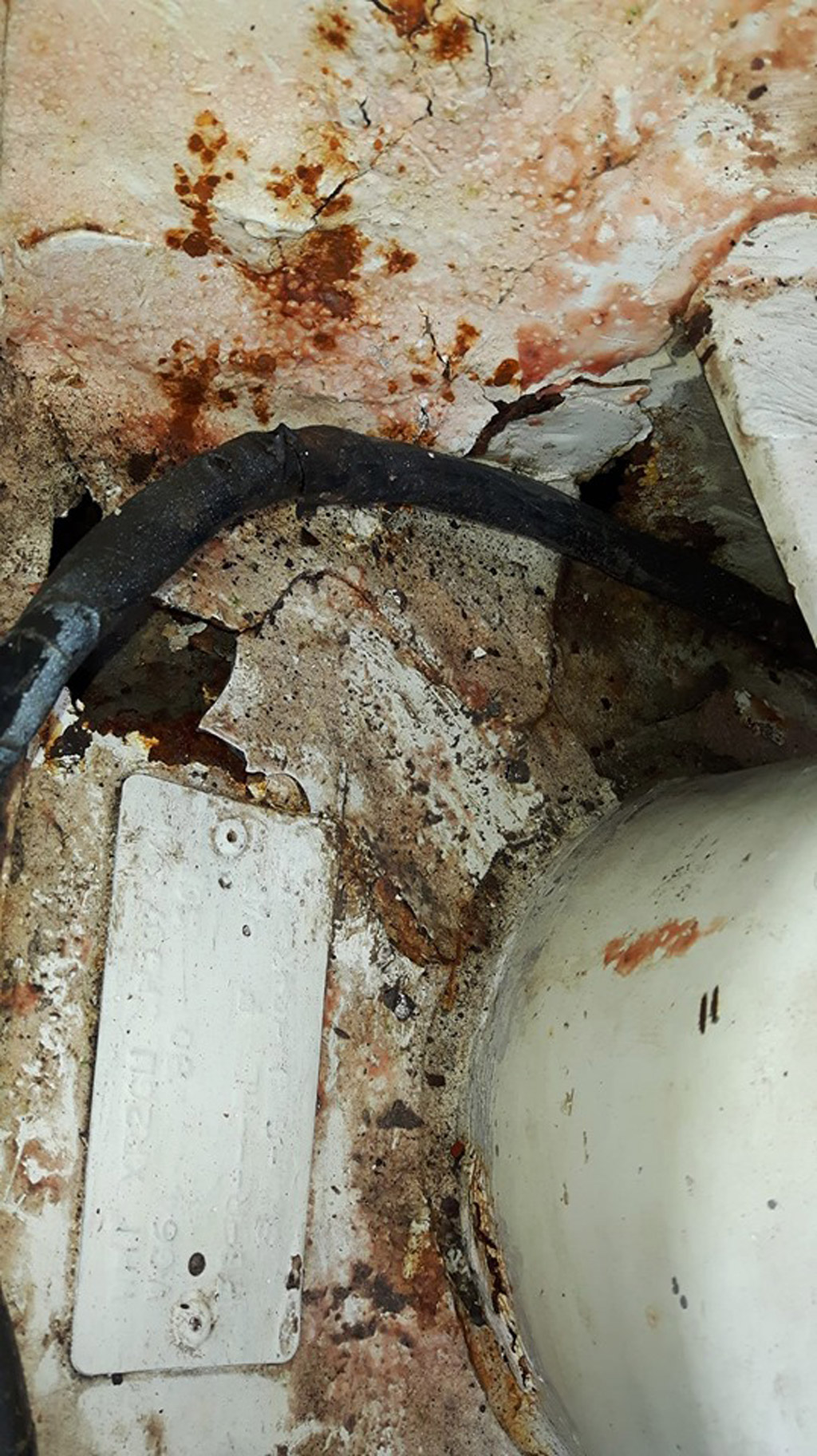 Under the battery tray is often an area that suffers due to the two layers of metal spot welded together and the addition of a bit of acid. Take care when removing your battery tray to repair, these are no longer available new, and expensive to buy secondhand. 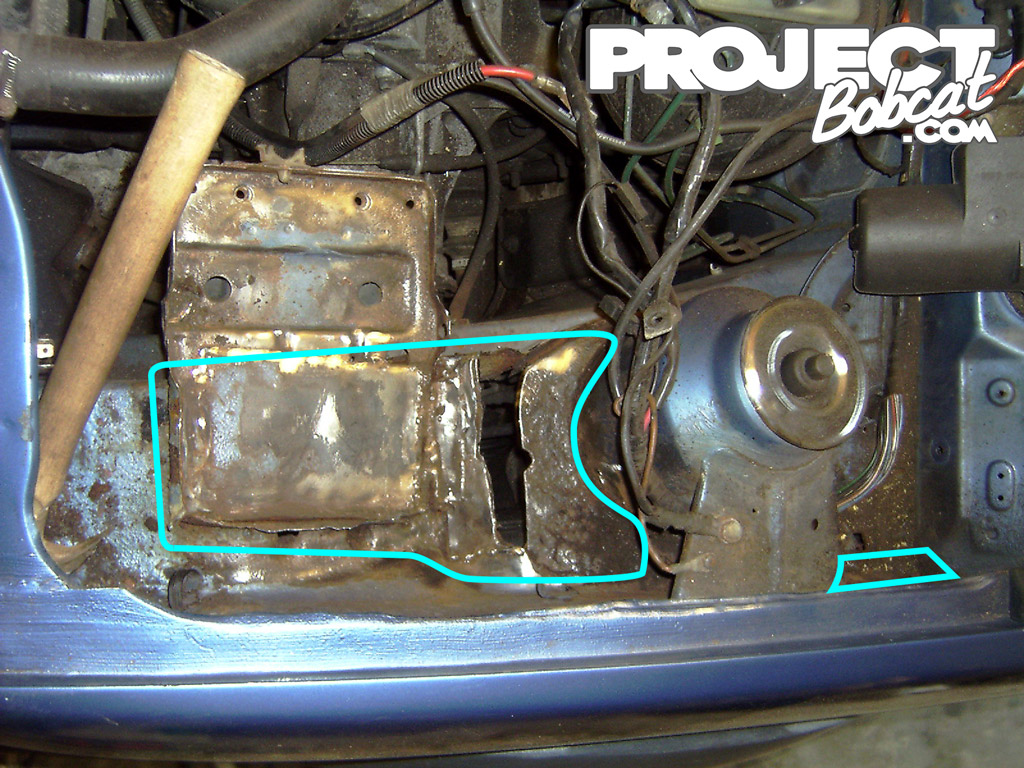 There's also a tricky area visible under the outer wing where the scuttle panel under the windscreen drains out at the corners. This sits somewhere between the inner wing and A-pillar, and needs the outer wing removing to repair if affected. The picture below is taken by putting a camera underneath the wheel arch, note the aerial in the photo which should help you figure out the rust area. Outer wing lip where it meets the bonnet, especially where it is spot welded to the inner wing. 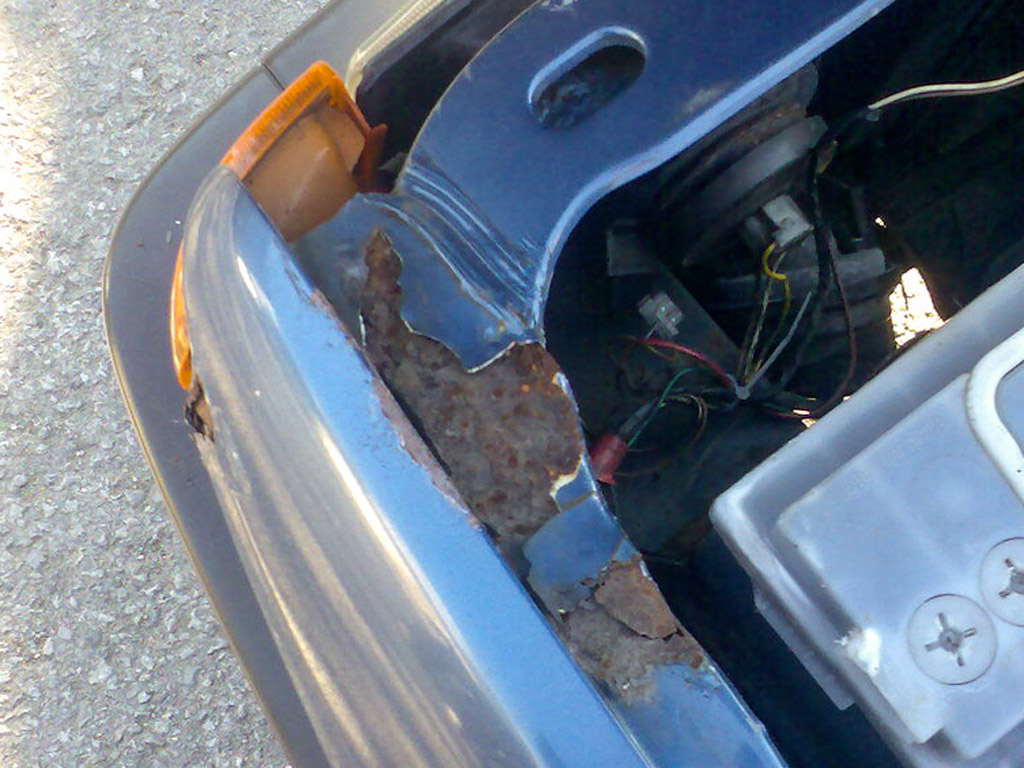 The seam between front panel and wings, underneath the front indicators. This usually starts off by manifesting itself as a slight bubbling in the ridge under the indicator lens, or spreading from stone chip damage to the valance, underneath the bumper. 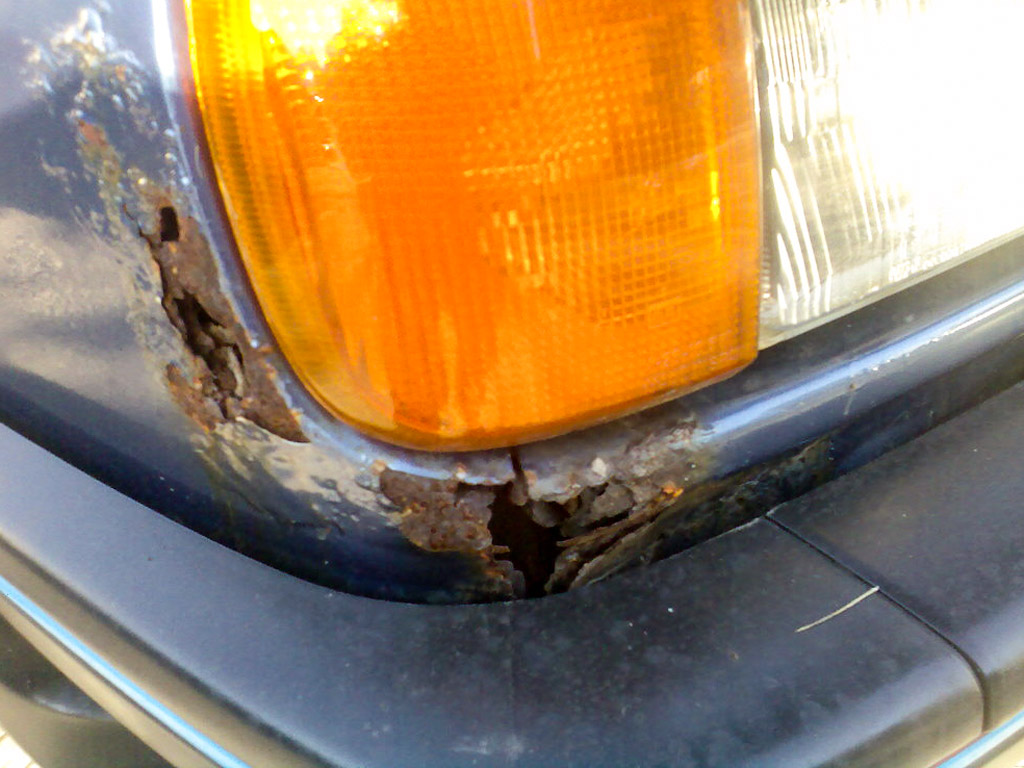 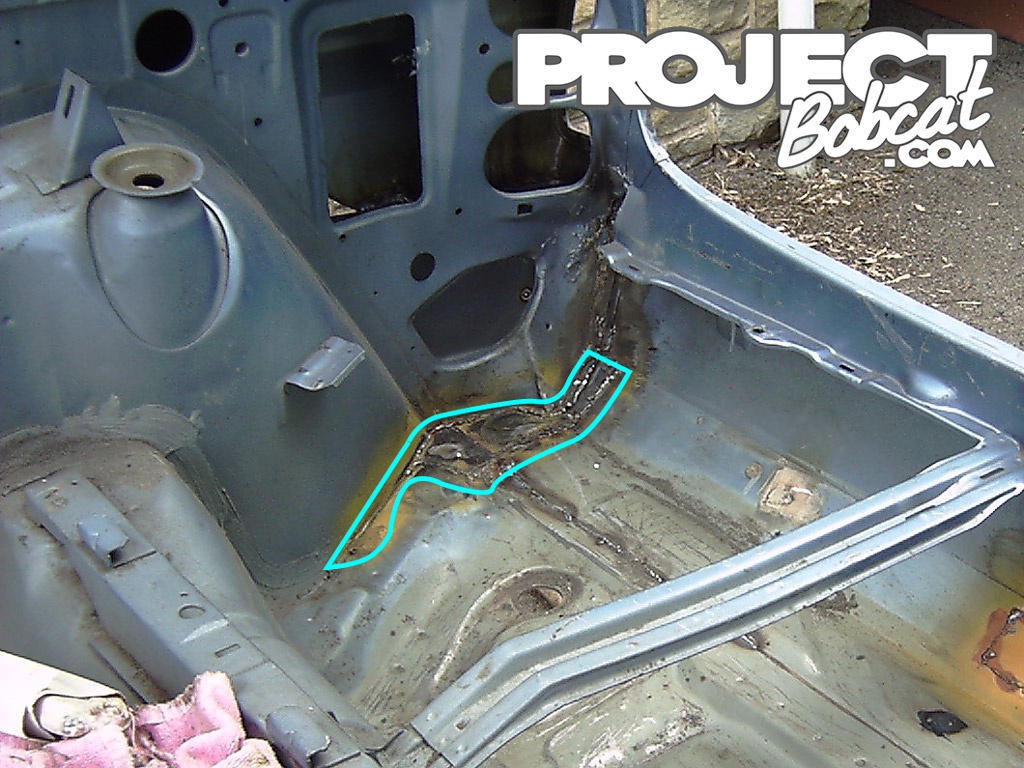 The lips of the arches on all models are a point to check, but the XR2 in particular suffered here due to the plastic kit trapping mud and moisture against the rear quarter panel. Rear arches tend to be much worse than fronts due to the double skin. 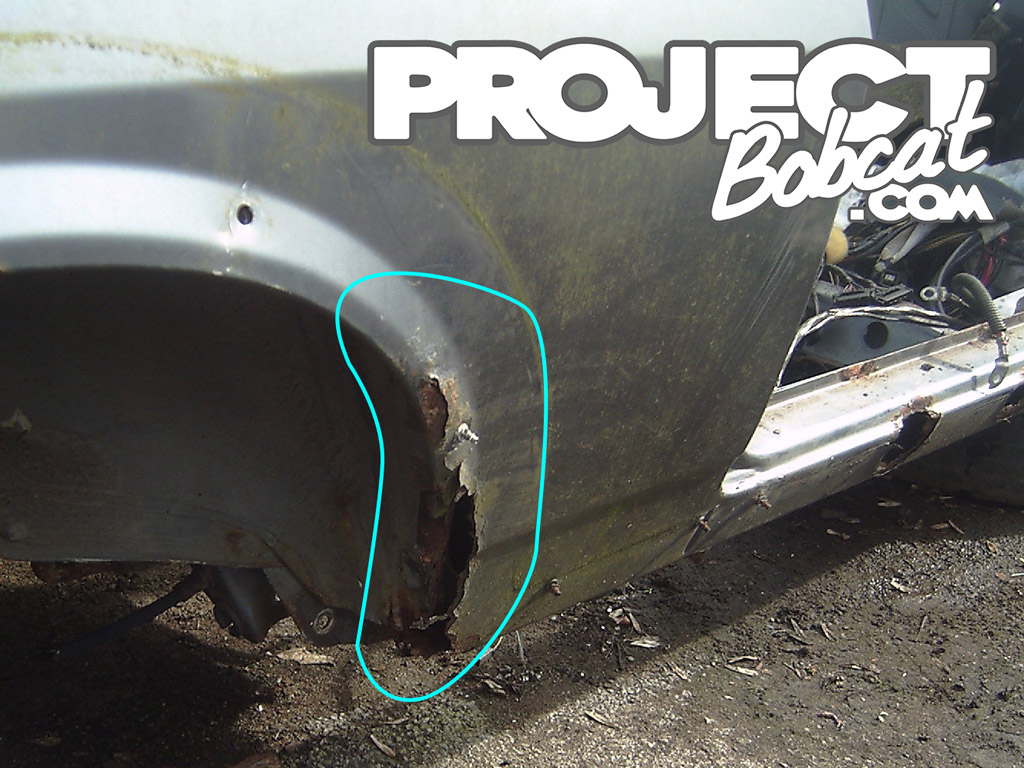 It's commonplace to find arch repair panels welded over the top of existing rust. This makes the situation worse in the long run. Trev Blu kindly supplied us with this photo of what he found when tackling the rust on his car. This bodge is also a popular one from corner cutting owners and dodgy garages when repairing sills. The sunroof corners around the drain holes often suffer, mainly due to a build up of dirt which traps in moisture. You can easily check this by lifting the sunroof and checking around it from the outside. If your car is fitted with a non-Ford sunroof, these can commonly cause the surrounding roof skin to rust due to poor prep when fitting.

Sills can rust badly on sunroof cars, the sunroof drains down a tube into the sill, which has weep holes to then let the water out, except they get blocked or if the car is left parked on a slope, the water pools in them and rusts its way out. A common modification is to drill holes in the sill to allow the excess on the plastic drainage pipes to poke out of the car entirely, and then seal them in place.

If the car has been fitted with a XR2 or RS option kit, the fixing holes along the outer sill edge are also vulnerable to corrosion holes. 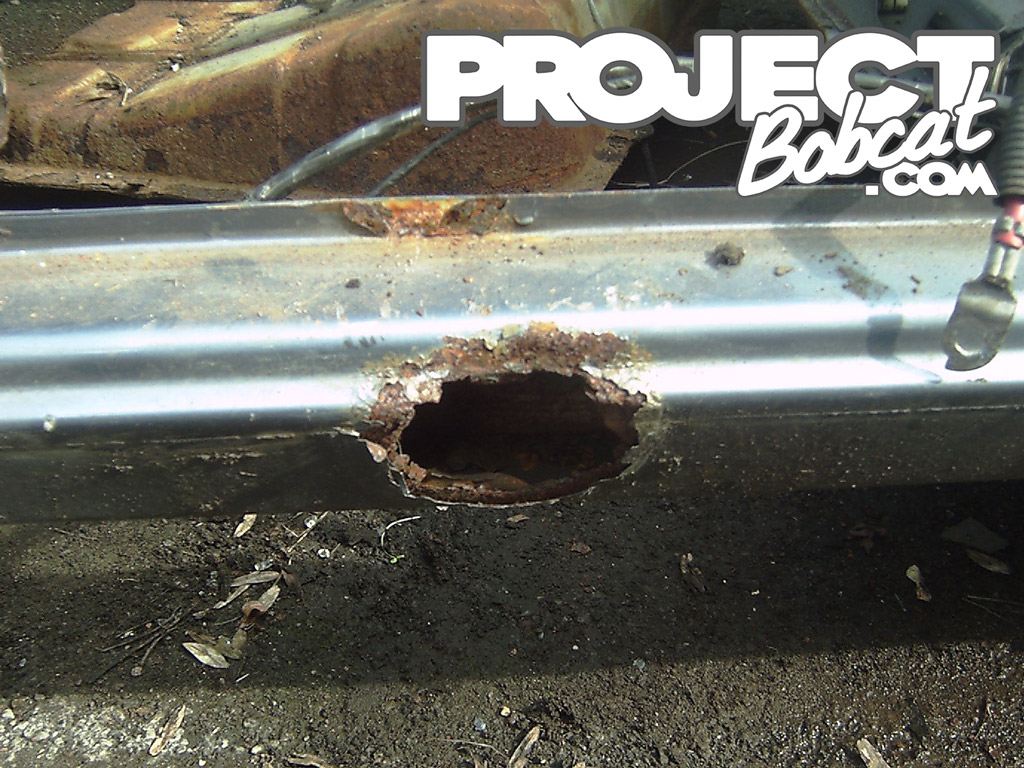 There is also an awkward section at the rear of the sills where the inner sill meets the chassis rail. This can be seen by getting underneath and viewing the reverse side of the inner wheel section. Repair usually involves cutting through the rear quarter from the outside skin, and removing and replacing three layers of metal. It's especially upsetting to have to slice through a perfectly good rear quarter to repair a rotten inner. 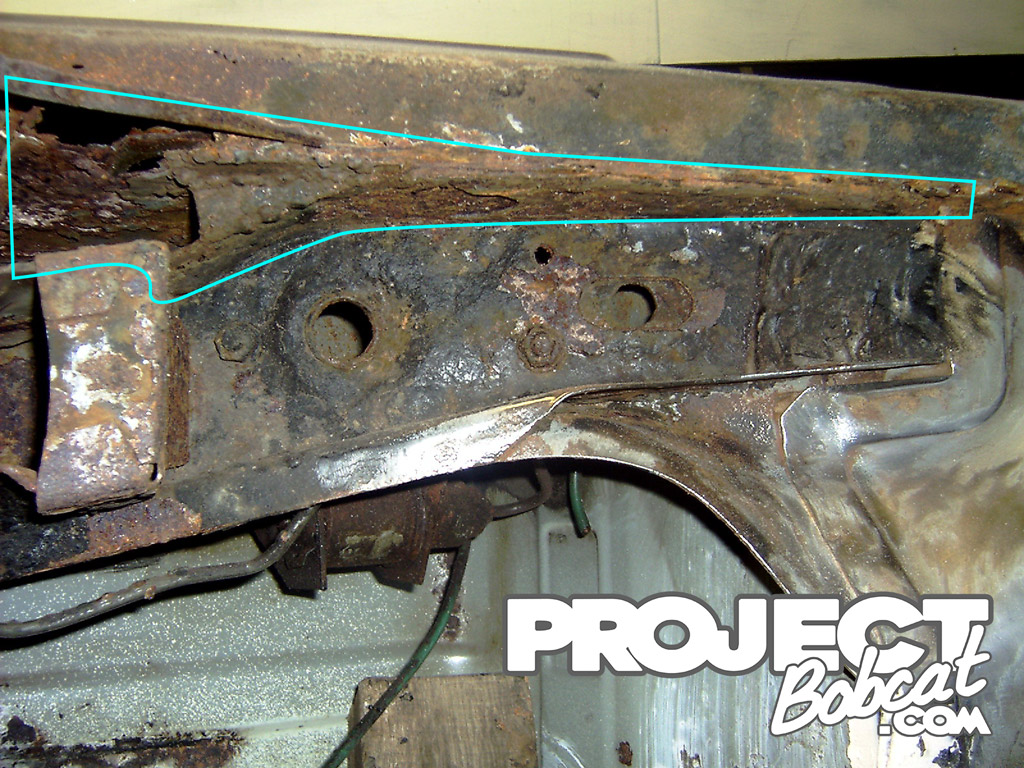 Here's a great image from Rob Reilly which shows just how severe the rust around the rear rails can be inside, and the area that often has to be cut away to repair it properly. 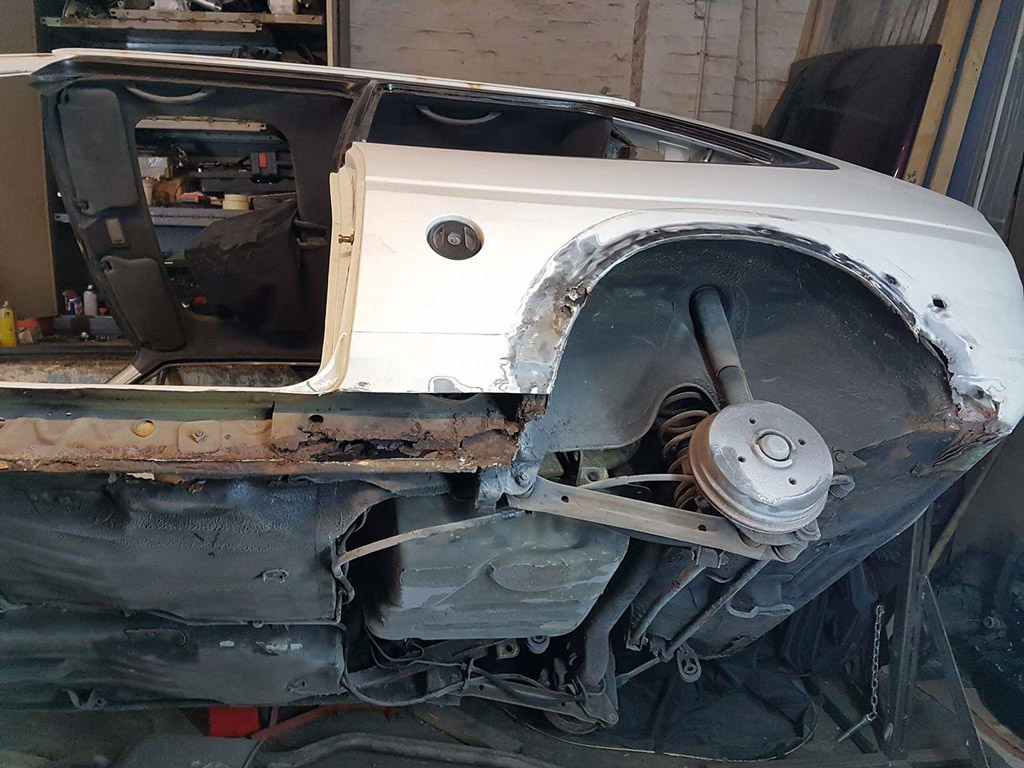 Quite a few sections of the floorpan are common rust traps, the first one to mention is the area where the inner seal meets the floorpan. The edge on the floorpan is turned downwards and the lips of the floorpan, inner wing and outer wing skins are joined together in a triple layer. This sandwich also has some slight bumps pressed in it which act as drains for any water in the sills as mentioned above. The rear seat mounting points are another weak area, you can see where they have been previously plated underneath on the car below. 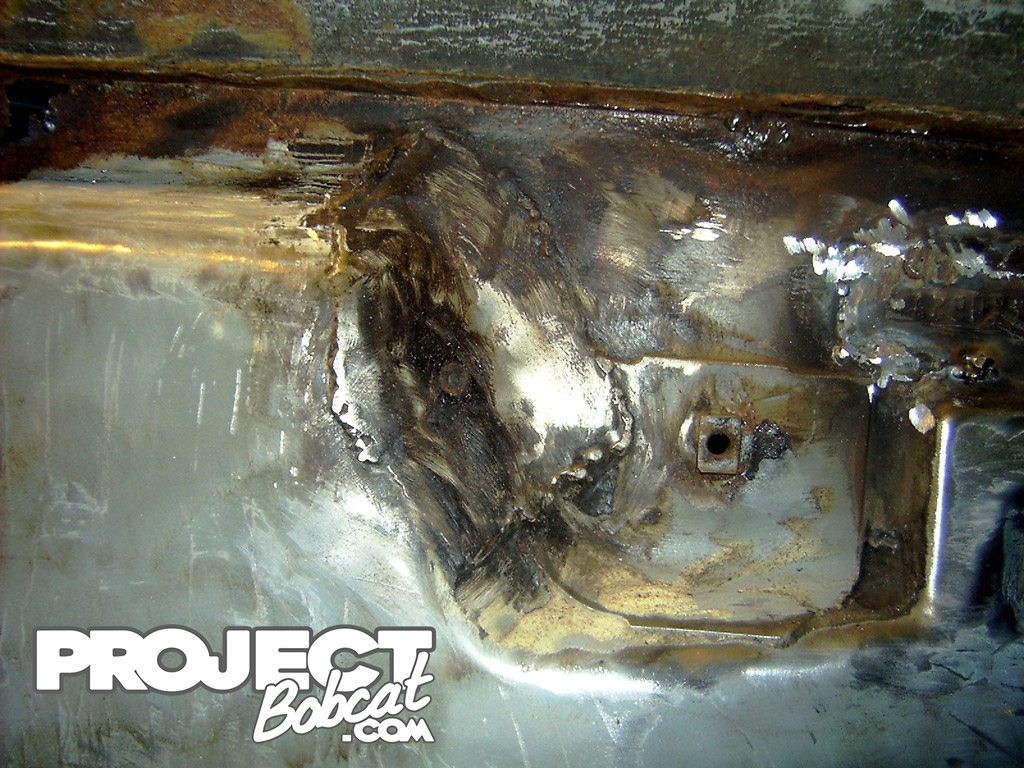 The final floorpan area is the seam where the floorpan panel meets the the bulkhead, the picture below shows it viewed from underneath. The chassis rails are again, multi-skinned and often suffer. The fronts hang low and often pick up chips which starts the rusting process, or rust from the inside out, and the rears are in a complex position and get hit by a lot of road water. NOTE: The rears are also partially covered in the section above about the inner sills, which meet with them. 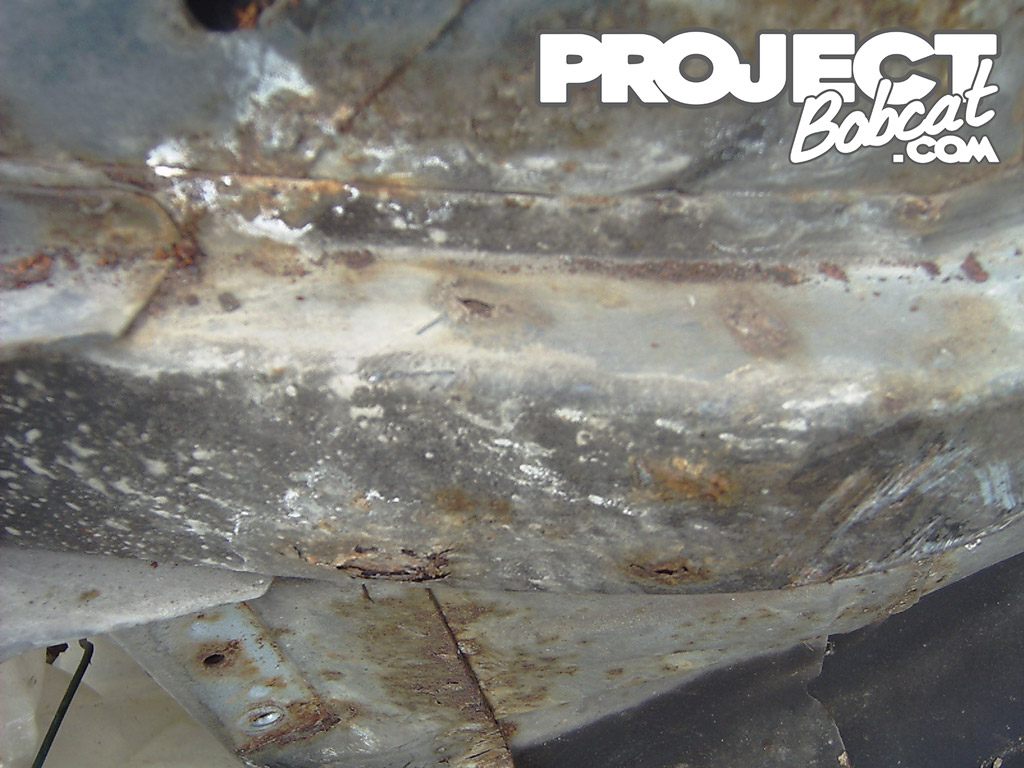 Trev Blu's image below illustrates what a rotten rear chassis leg can look like when compared to a solid version. 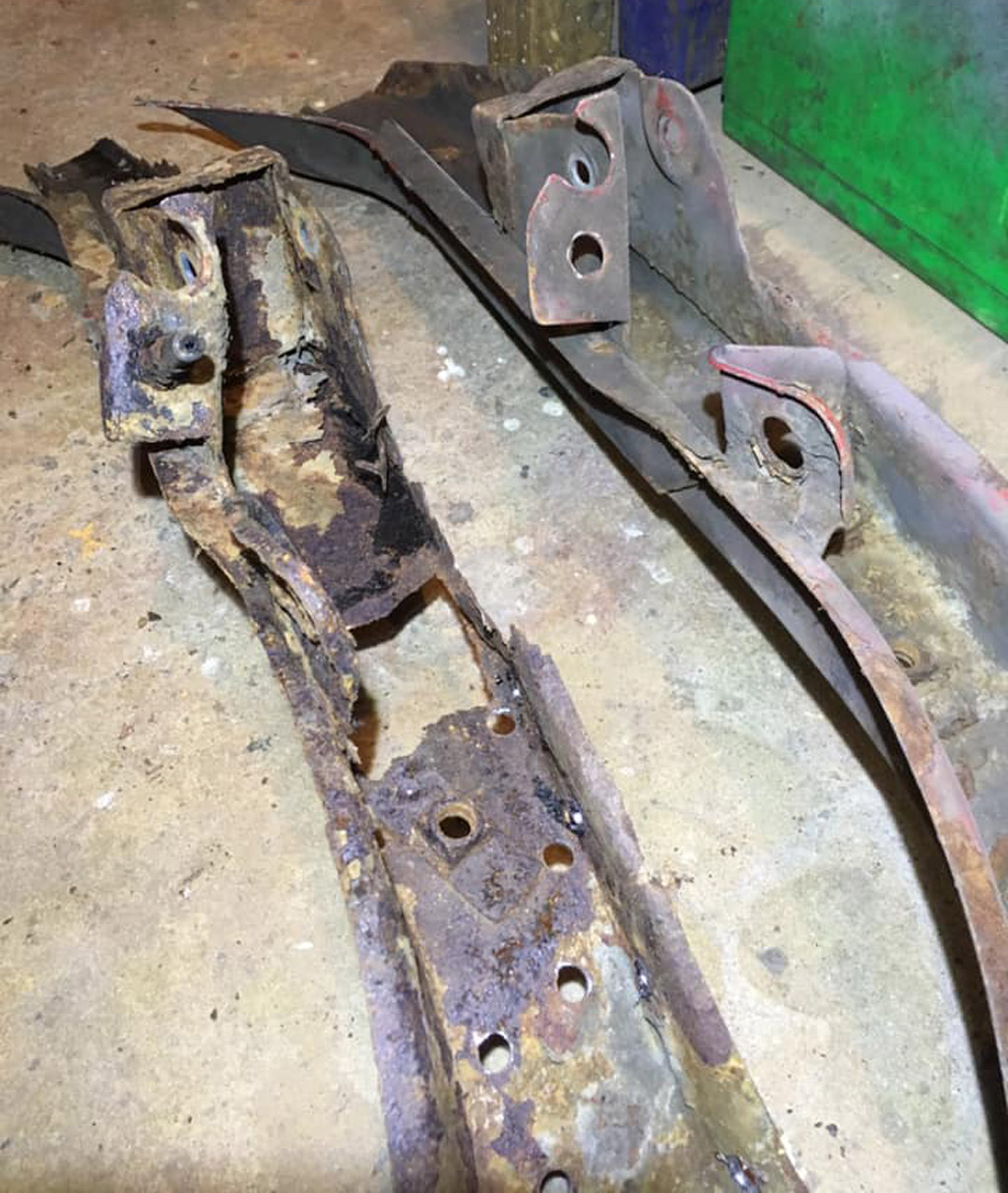 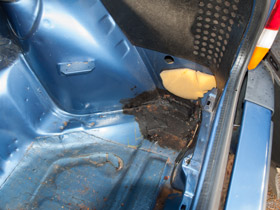 Common area for unwanted water to get inside your Fiesta