When carrying out an engine conversion, it's quite common to want to pick a gearbox that has the most suitable ratios for either quick acceleration or a more comfortable engine rpm for long distance driving. The table below contains the ratios for some popular gearbox choices when converting your retro Ford Fiesta. As with all our guides, the information cannot be guaranteed to be 100% correct and is provided as a guide only. If in doubt please contact a qualified mechanic.

If you can add to the info displayed please email the webmaster at info@projectbobcat.com

BC Gearboxes were all fitted with a thin aluminium identity tag (see image below) which is attached via one of the bolt holes on the top side of the box, this tag displays a code which tells you which model, engine type and year your transmission unit comes from. Early boxes (Pre 1986) used a V prefix tag code to signify that the gearbox was a high performance version. The Rs1600i box had a unique bellhousing due to its ignition sensor. 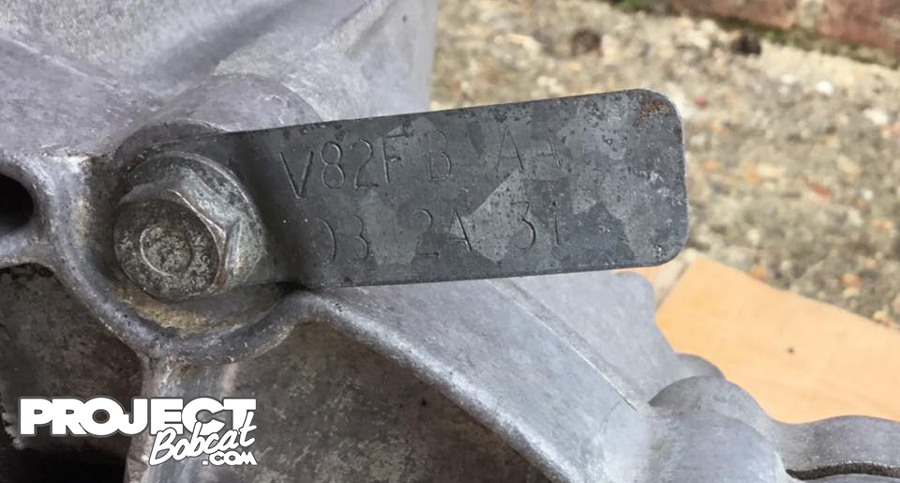 These boxes are completely interchangeable, with driveshafts, input shaft and bellhousing bolt patterns in the same place regardless of the internals fitted, which is why it's so easy to fit, for example, an Escort RS Turbo gearbox in the Fiesta.

After 1990, Ford recognised the need for an improvement in the bearings on some BC boxes. Unfortunately, this was too late for the Fiesta Turbo which kept the older, smaller style bearings. However, two models did get uprated bearings: the 1800 Zetecs (e.g. XR2i 16v and RS1800), and strangely the 700Kg payload Fiesta Couriers. Although these uprated bearings are pretty much the same as those used in the iB5 box, note that the box was still a BC and not really an iB5.

The IB5 gearbox was introduced in 1995 as a replacement to the BC, it comes in both front and rear starter variations, has a 20mm x 17 spline input shaft and holds 2.8 litres of transmission oil.

This box was fitted to all Fiestas, Kas, Pumas, and some Escorts (not RS2000, Cosworth or 130PS Zetecs) and Focus models. The rear-mounted starter is handy on Zeta/Zetec-E/Zetec-R engines as it keeps the starter away from the exhaust heat and allows more room to work on any turbocharger fitted. Unfortunately for CVH owners, the block's sump breather fouls the starter and prevents a rear-mounted starter being fitted unless you relocate this breather.

Apart from the breather difficulties on rear-mounted starters, the iB5 box is a direct replacement for the BC box. You can your existing clutch with the iB5 clutch release bearing.

The iB5 contained stronger input and output shaft bearings compared to the BC box, but was never fitted with an LSD (limited slip diff) in any models. A specialist gearbox builder will be able to advise on the fitting of an LSD to the iB5 box.

Gear ratios are a bit of a problem, especially on later Ford boxes where shopping trolley-power engines became the norm and buzzy boxes were fitted to help these cars get up to speed. Further down the page is a listing of some of FWD gear ratios and a link to a small Excel spreadsheet which allows you to put in your gear and final ratio, an engine speed, and your tyre size (e.g. 205/50 R16) and will calculate your road speed - handy if you want to work out if your speedo is reading wrong.

The Getrag MT285 6-speed transmission is a close-ratio manual gearbox fitted to the Mk1 Focus ST170. It features a hydraulically operated 228mm clutch with dual-mass flywheel.

The MTX75 is a front wheel drive gearbox used in the Ford Mondeo, it weights 36kg and has a length of 39.3 centimetres. Maximum input torque is 280Nm and max input speed is 7000rpm. The recommended transmission oil is ATF+2% Friction modifier, and the box requires 2.61 litres of oil.

This gearbox is a development of the MT75 RWD transaxle fitted to some Sierras and Granadas. It was used in some Focus, Mondeos, Escort RS2000 and RS2000 4x4 models, and was hailed as Ford's new, heavy duty FWD transaxle. Although only ever fitted with a Quaife LSD in the Focus RS, the standard diff is partially locked and makes for good power delivery. A 6-speed variant was fitted to the Focus ST170.

Fitting this box in the Fiesta, Ka, Puma and BC-equipped Escorts requires some welding on the chassis to fit a new mount, or the fabrication of conversion brackets. One other problem lies with the driveshafts - one of the driveshafts will require modification to fit the box.

The Mk1 Mondeo 4x4 version of the MTX75 gearbox had the same technical specification as the FWD version, however it required only 2.41 litres of oil, with the transfer case requiring a further 0.68 litres.