For the purpose of this article we are discussing the Zetec-E engine as fitted the Ford Mondeo,Escort and Fiesta XR2i, this differs from the Yamaha designed Zetec-S engine fitted to the Ford Puma and MK4/5 Fiesta.

The Zetec-E came in two variations, the earlier 'silvertop' engines were fitted with a unfinished silver aluminium cam cover where as the later 'blacktop' engines came with a black plastic (or magnesium in some cases) cam cover.

Released in 1991, early engines were called 'Zeta' and were identifiable by having DOHC stamped on the rocker cover, the story goes that Italian car maker Lancia got upset over trademark infringement so the Zetec name was adopted in 1993 and series 2 engines were then stamped with Zetec 16V and featured some minor improvements over the earlier design including a fix for sticking valves if the owner didnt keep up with regular oil changes.

The series 1 and 2 Zetec engines can be identified by a three digit code on the engine block, stamped onto the edge of the gearbox bell housing mounting flange, the number is also close to the engine number.

The Series 3 blacktop Zetec first appeared in late 1998 and was fitted to the later Mk2 and early mk3 Mondeo in both 1.8 and 2.0 variants as well as the Mk1 Ford Focus. 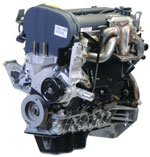 The blacktop had several design improvements including rerouting of the cambelt to provide more contact with the cam pulley on the exhaust cam and mechanical lifters as standard. Unlike the S1 and 2 Zetec's The Series 3 only has one style of waterpump, external with the impellor driven by the back of the serpentine belt, this provides a small obstacle to overcome when fitting to a Mk1 or 2 Fiesta. Whilst parts from the Series 1 and 2 Zetec's are interchangeable, the Series 3 is quite different and not many parts are transferable.

Although badged as a Duratec, the Focus ST170 engine is actually a Zetec, allbeit with a stronger bottom end and variable inlet cam timing (VCT).