This project re-shells the first attempt that was sadly written off.

The insurance payout came through for the last project that was rear ended by an Astra, so I've set about looking for a replacement. This one has come up for sale around 45mins away. The seller is asking quite strong money for it, but as it's an insurance payout that's funding it, I feel that I can spend a bit more than I usually would to get the right shell. This one ticks all the boxes, being rust free, solid, and within easy travelling distance. I'm already familiar with the car as the seller brought it to Fiesta in the Park last year. 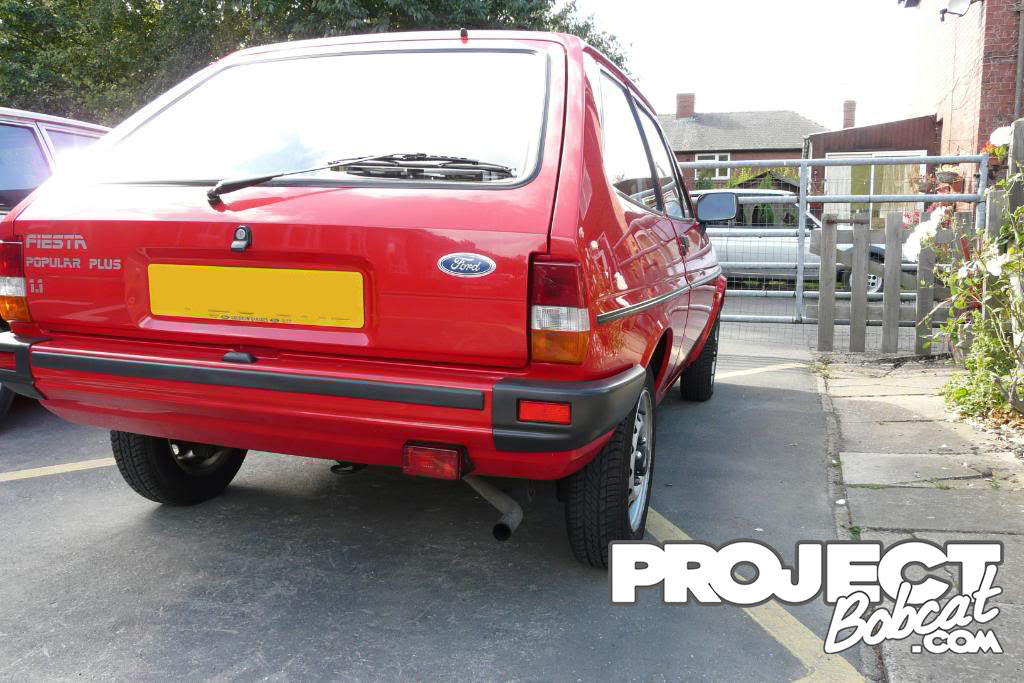 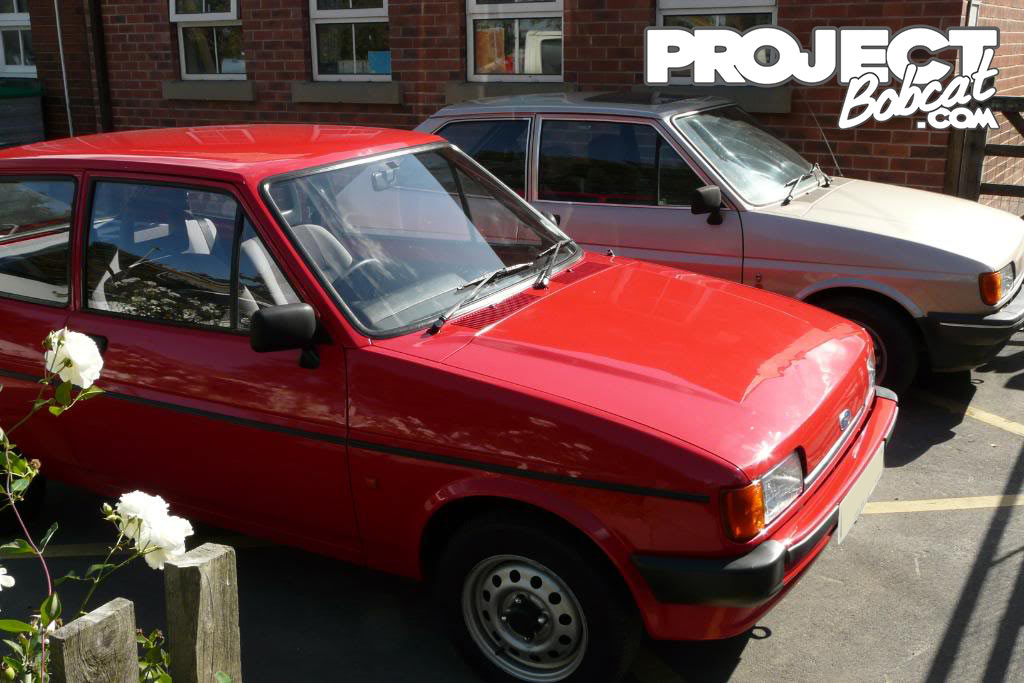 The picture below shows how the car is currently looking, it's lowered with recaro front seats and a 1600cvh engine/5 speed box combination.

Another Mk2 Popular Plus comes home

After going to view the car, I had to have it, no rust or dents anywhere! Its been modified a bit by the last owner but I want to remove most of whats been changed. Here's some pictures taken as it arrived home. Excuse my horrible wheels, I came to an agreement with the seller that he could keep the pepperpots so I used these rusty Mk4 steels to get it home. 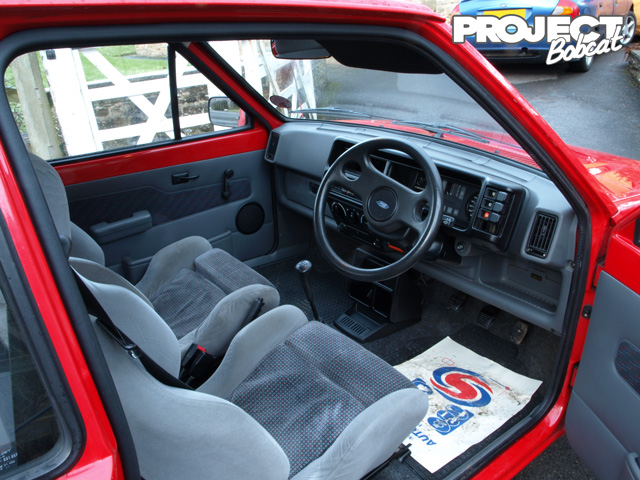 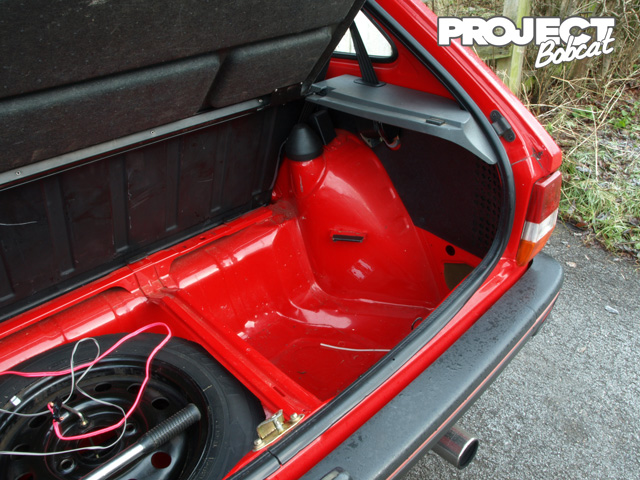 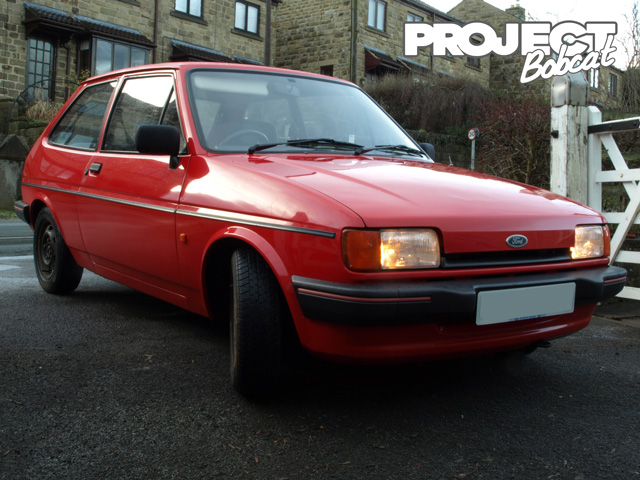 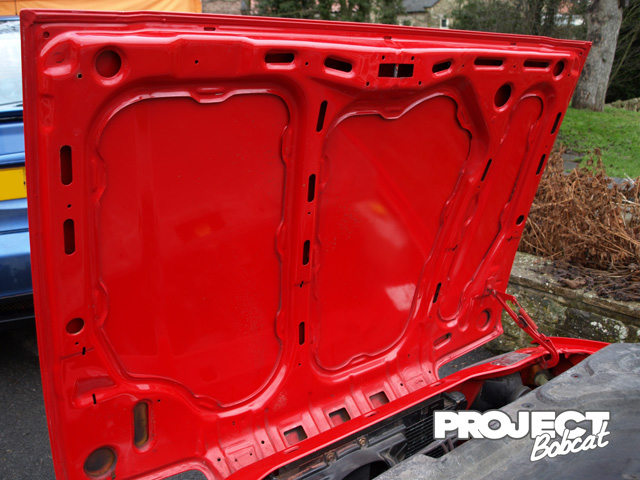 Whenever I get a new car I get quite curious to see if its as solid as it looks in the places that you cant see so on the first day of owning it, I stripped out all the interior for a better look. This one is almost as good as it was when it rolled off the production line, just a little bit dustier. 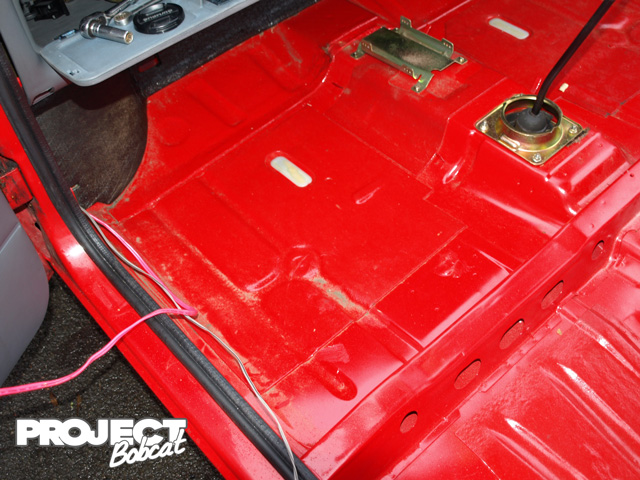 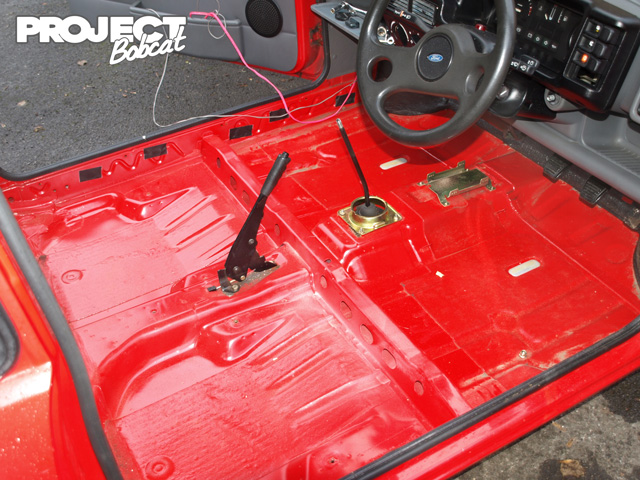 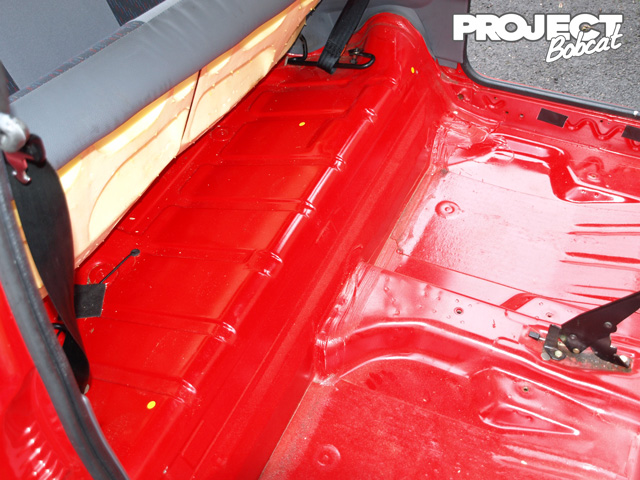 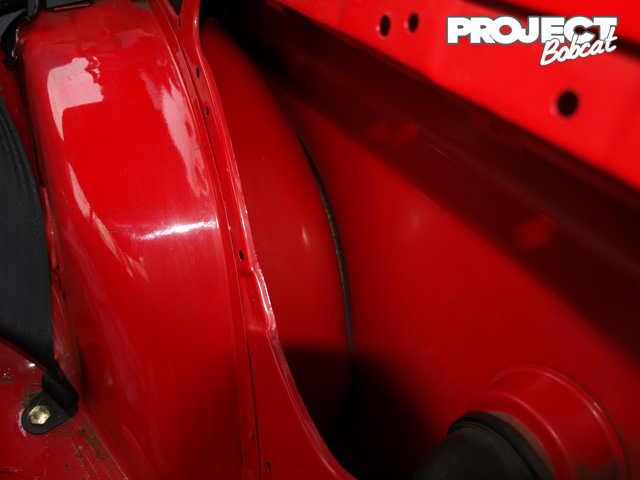 Whilst the interior was out, I added a couple of sound deadening pads to each of the rear wheel tubs to reduce road noise. 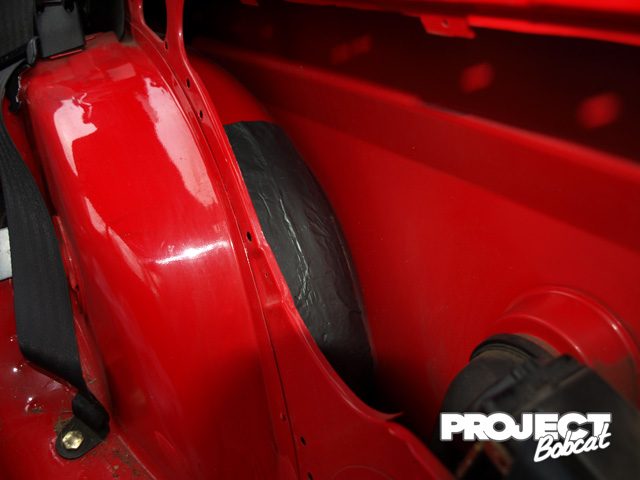 ..and the Ford sound absorbing mat to the underside of the bonnet 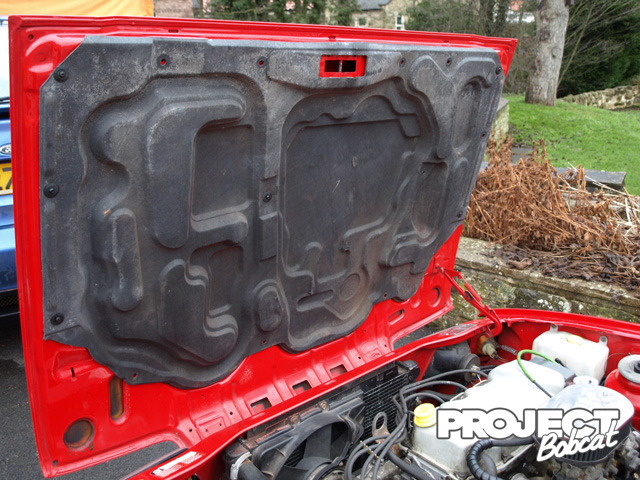 The next important thing I wanted to sort out was the handling, the car crashed its way along over every small bump. After removing the suspension I found it was running standard, low spec, oil filled shocks with cut springs. I have a spare set of G-Max shocks and springs so I've fitted them to improve things a bit. 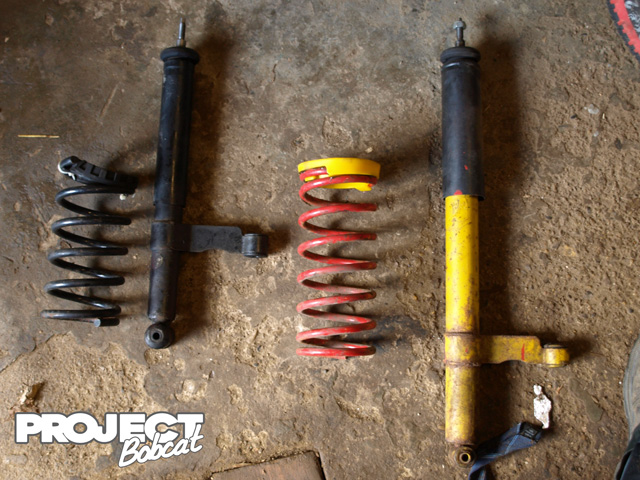 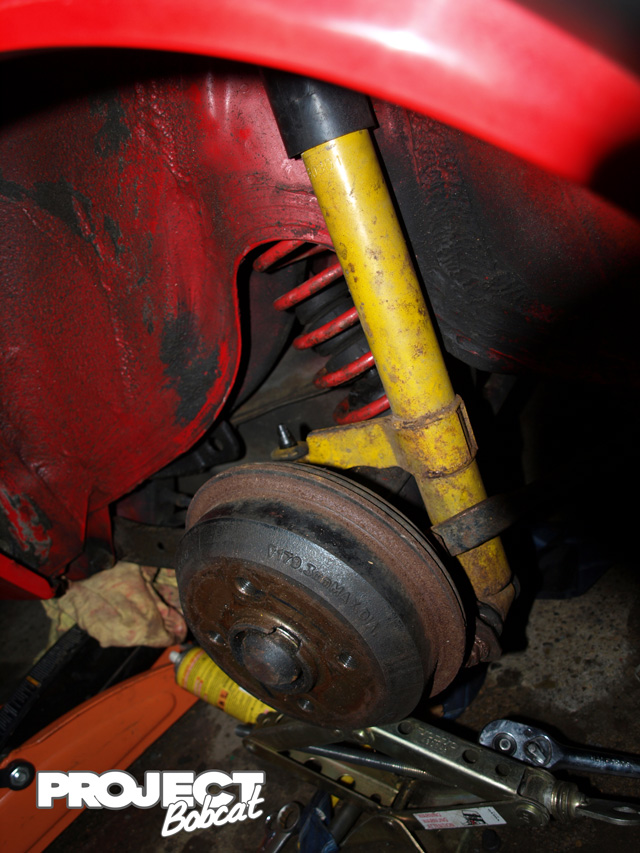 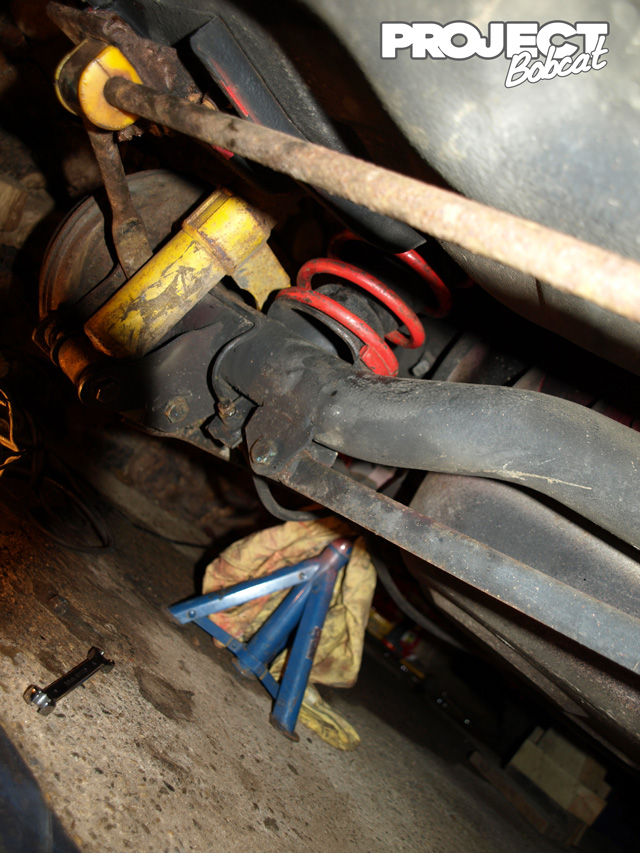 The car came with a 1600 XR2 engine with a couple of bolt on mods like a 4 branch manifold and K&N filter. It was in good condition, but after the slightly quicker pace of the last car, it was never going to do. I'd bought the other car back from the insurance, so the 2.0 zetec was sitting around, waiting for a new home.

The CVH engine came out of the top with the use of a block and tackle and some seat belt webbing. It made sense to also fit the uprated servo from the other car at the same time. 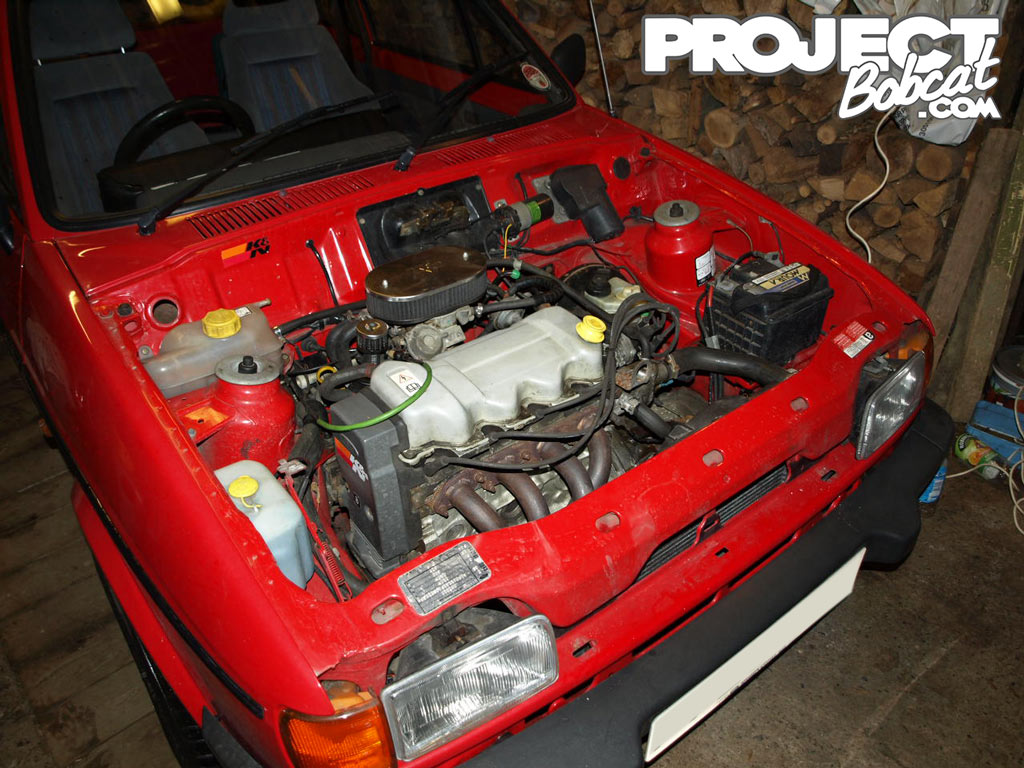 Last time I carried out the Mondeo servo mod, I used the XR2 brake bar and pedal,which meant cutting the servo brackets and welding in a wedge to get it sitting flat. This time I stuck with the low spec brackets which dont need the same modification. The servo already sits pretty level. A couple of washers and some slight enlarging of the bracket holes get it sitting nicely.

Whilst I was putting it together, I did find another problem. My Mk1 Mondeo servo didnt seem to be operating correctly when the pedal was pressed. I took it apart to find that the adjuster inside had snapped. Luckily I had a X Plate Mk2 Mondeo sitting on the drive, so I robbed its servo and master cylinder instead. It had a hydraulic clutch take off, so I blanked that off with a stainless bolt. 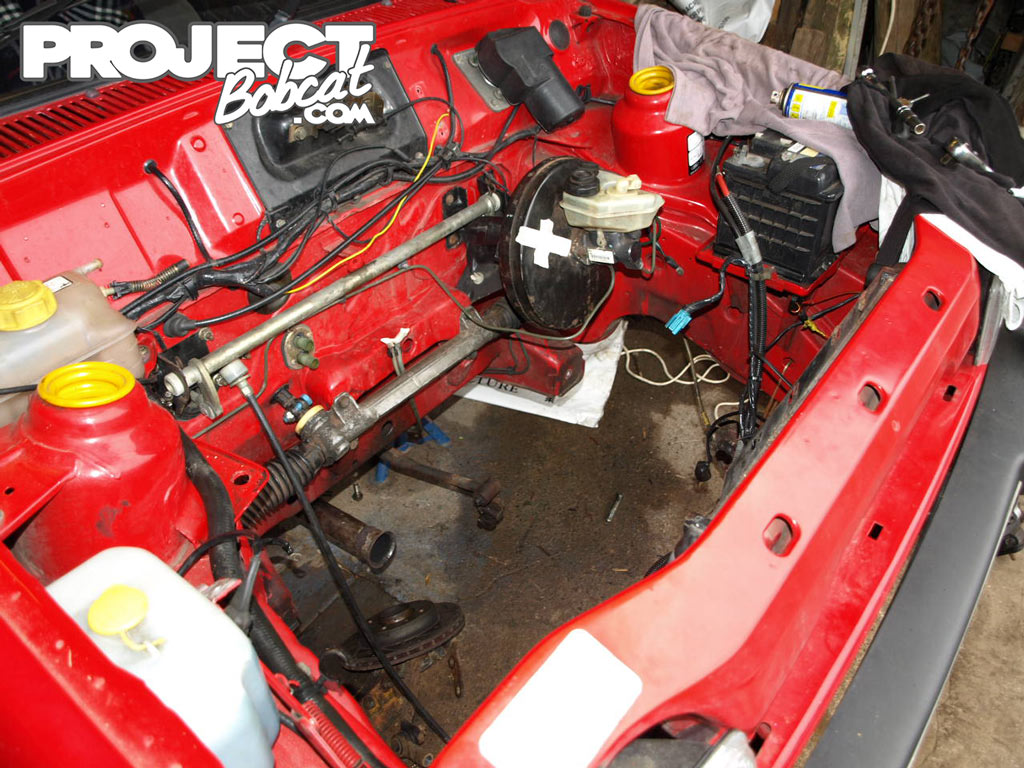 With that extra delay, I'd run out of time for the day, so the new engine will have to wait till next time

Zetec engine goes in to the bay

I had a go at getting the 2 litre Zetec in today. It was pretty straight forward as I've taken it from another Fiesta, so I've already done a lot of the hard work in terms of swapping sump water pump, flywheel etc. The S2 ERST box had begun to whine a little, so for the time being I've installed a rear starter iB5 from an Escort GTi in its place. 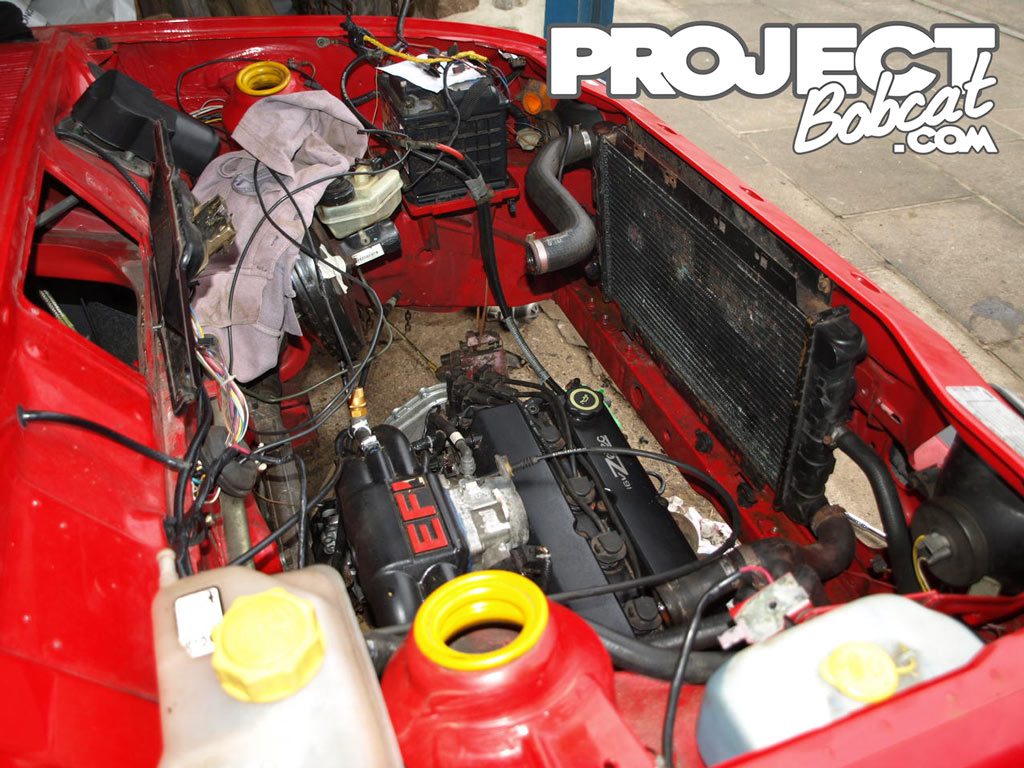 In time I'd like to replace the XR2 radiator with something a bit newer. It's starting to look a bit tired

By around lunchtime the engine was in and supporting itself on it's own mounts and had the wires connected. Next it was time to tackle the cabin side of the wiring. Again, i'd transplanted the loom from the previous car. 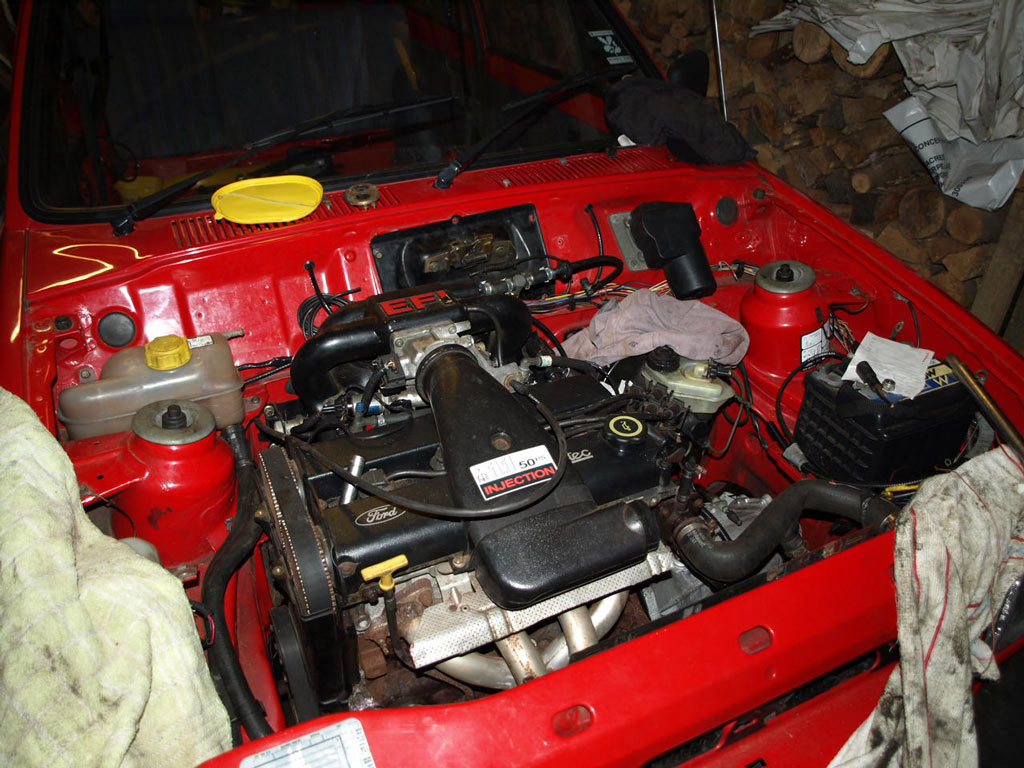 I took the opportunity to tidy up a lot of it, and did away with a few things from the old car which I no longer needed 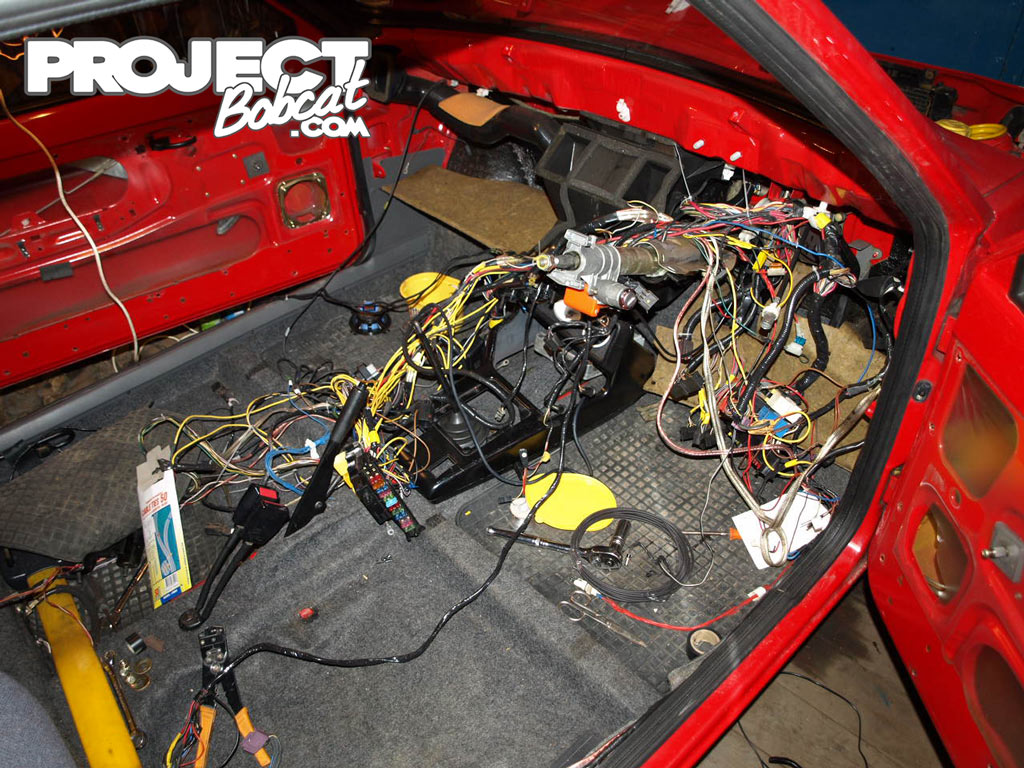 I had a recent incident where someone in a VW Golf ran into the back of me on the motorway, I'd done a quick repair of the rear panel to keep the rust off but the cracked XR2 back bumper was letting things down. The fashion used to be always fit these cars with bumpers from the XR2 models but now that they are becoming a classic, the standard metal bumpers are a nice feature. I prefer the earlier versions which didnt have the rub strips fitted to them but I already have some of the later items. Rather than waste the ones I had (which are a bit damaged) I thought I'd remove the strips, weld up the holes and straighten and repair them as I went. I try not to waste any parts now because there's hardly any in the scrapyards anymore and parts are rising in cost.

A sharp screwdriver helped remove the rub strips and the plastic bumper ends leaving the metal carcass. I used a wire twister knot wheel on the grinder to strip it of all paint and the majority of the rust. 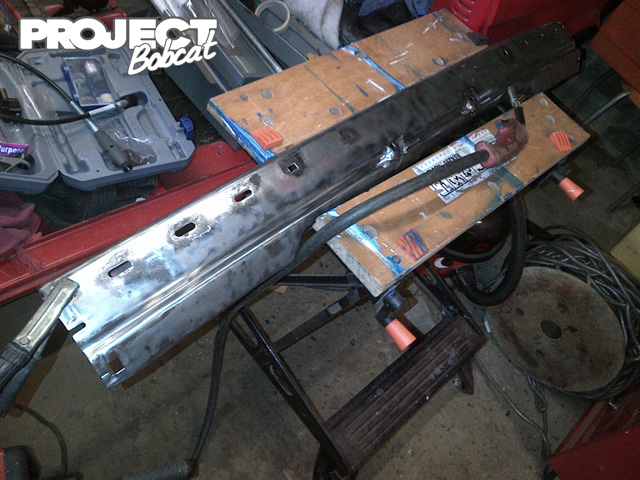 Then the Mig welder came out to get rid of the rub strip holes. 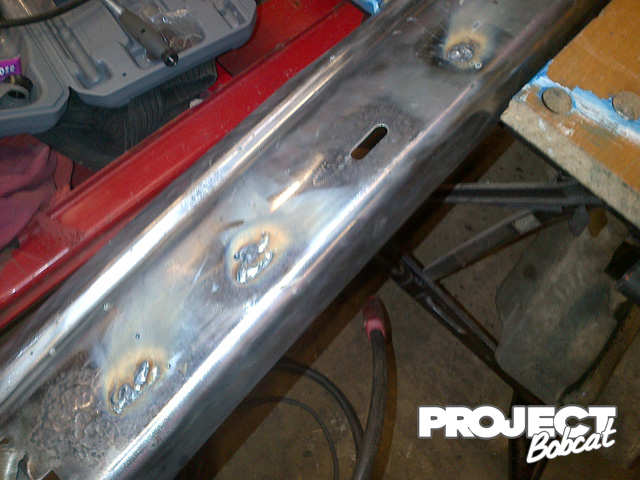 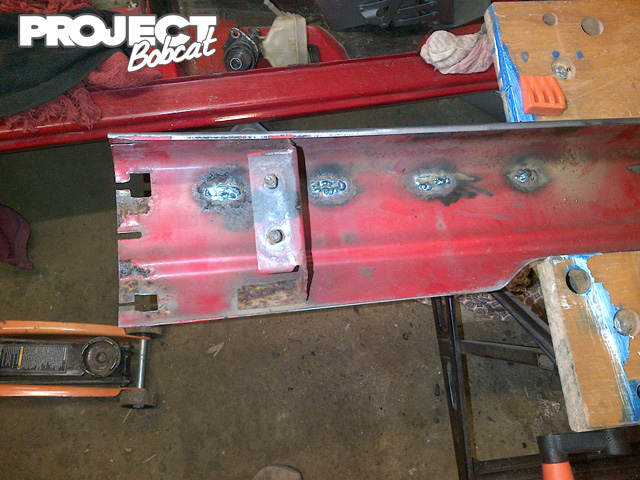 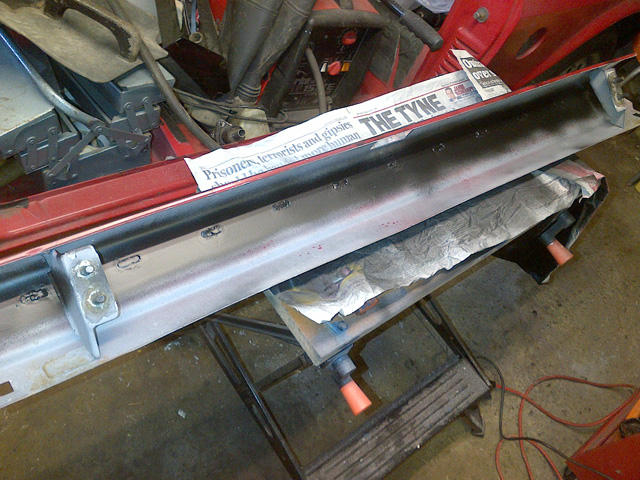 The welds were ground down using a flap disc followed up by a 3M flat sanding disc. Some small imperfections were given a thin skim of filler (bondo for anu U.S readers) and then it was primered and painted. Theres a lack of photos here, sometimes i get carried away with what I'm doing and forget to record it. 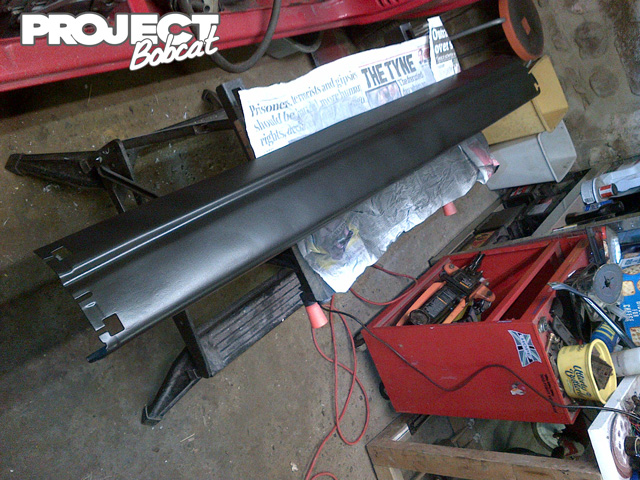 Ive given the inside a coating of brushable seam sealant over any welded areas and then used black stonechip spray to protect it from future corrosion. 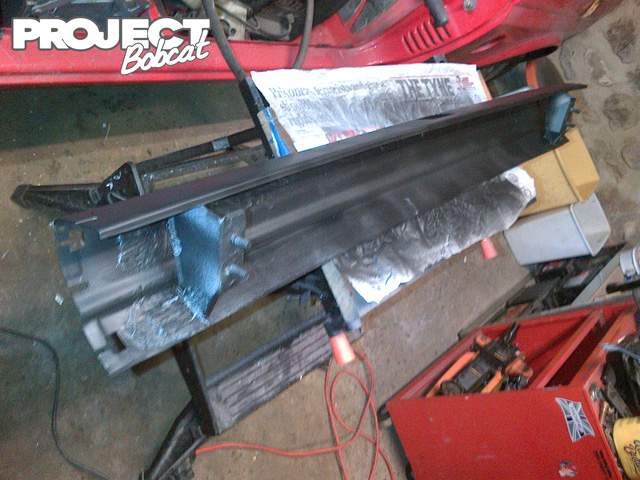 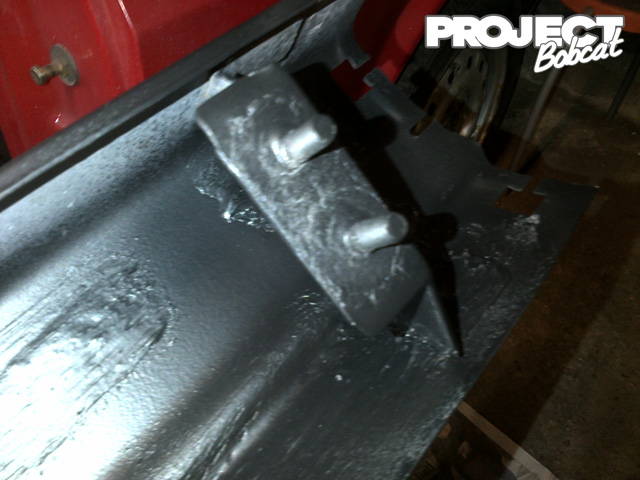 The end caps were given a light sand and re-blacked before being reassembled with clean reflectors fitted. 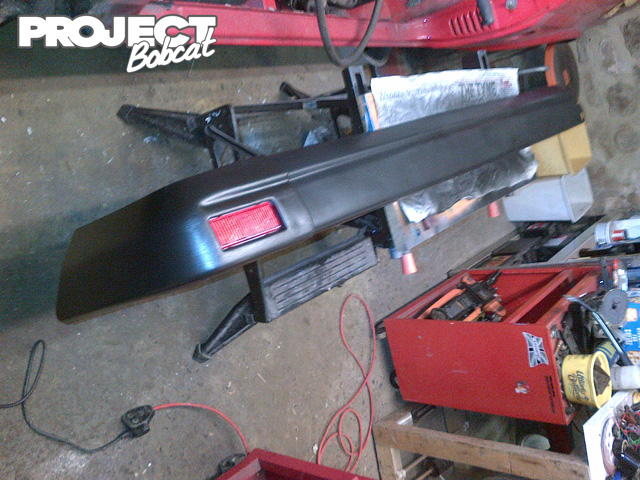 Ive now got the front bumper to do so that they match, a previous impact had broken the mounting bracketso i drilled a hole through the bumper and used the Mig to create a spot weld and join it back together Thats all I had time to do today so the fitting will have to wait.