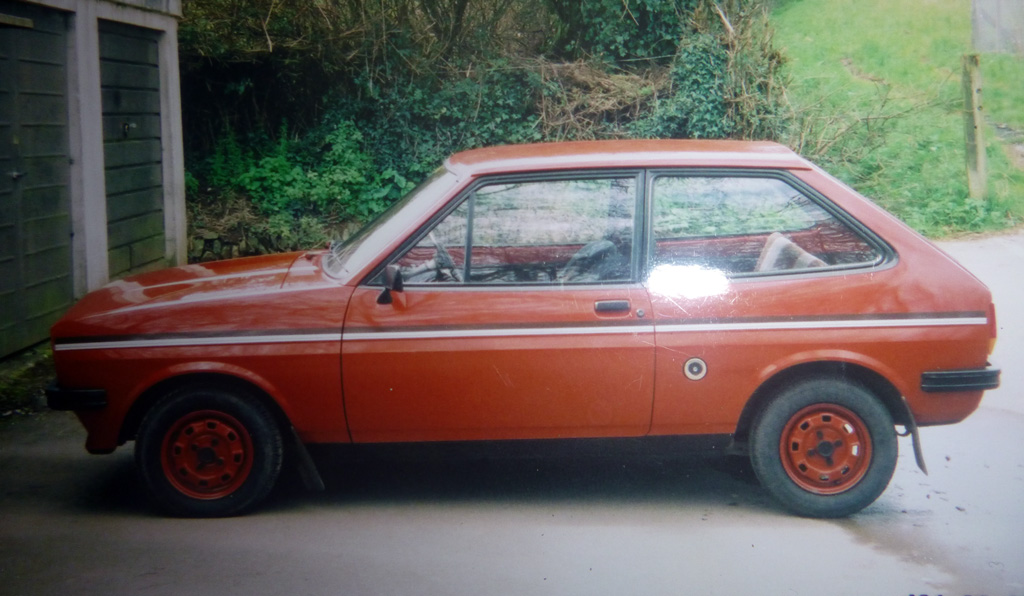 The owner described this car as a Terracotta firefly but it was first registered in June 1980 (one month early) according to the DVLA, and the car is listed as being painted bronze in colour at some stage in its life. The car has been converted to run a 1700cc engine.

In 2009 the car was advertised for sale with the following description:

It is with sincere regret that we have decided to sell the Firefly. With a first home, a new career and multiple vehicular commitments on the go we can not afford to keep the him on the road and as a classic car enthusiast I know it is absolutely NOT fair that such a rare and fantastic example is left to rot on my drive. (And it would!... because I'm lazy and rubbish.) We are therefore keen to sell to you! - A MK1 enthusiast who we can trust to keep him in tip top, as-original condition. Image Right. Down to business. The Fiesta Firefly is a special edition of which only 2000 were ever made. Have a look on the site/forum for details of spec or give me a shout. In a nutshell it's a V-Reg 1980 with a 957cc high compression engine, sport suspension and Ghia bits and pieces. And best of all - colour coded rims and brown go faster stripes.
This particular example is in incredible, as-original condition. It was manufactured in Valencia and has since spent its entire life in and around Minehead in Somerset. Up until August 2008 it had spent the previous 18 months off the road tucked away under a carport, having previously been driven very rarely by an elderly woman since she bought it in 2006. He's had four previous owners (five including us). It's got around 34k genuine miles on the clock. Absolutely immaculate interior (except for the classic popped speaker panels!). Exterior is just as good! No rust. One or two scratches, a bit of dodgy touch-up paint (even got the original pot of Ford Terracotta touch-up paint!) and a dent around the passenger-side taillight. That is it. It flew through its first MOT in 18-24months in January 2009. Just a seized front wheel and clutch and we were away. So MOT due in Jan 2010 taxed until end of Nov 2009. The Firefly comes with its original Ford Car Owner Handbook, Firefly version of 'Ford Fiesta Your Operating Guide' (silver Firefly on the cover!) and Ford Cars FordSure Service Plan logbook. All in great nick. The service plan has still got some Free Diagnostic Check vouchers but I doubt they're valid anymore! :D Engine is sweet as a nut. Runs well and looks incredibly neat and tidy. He made the round trip from Bridgwater to Santa Pod for Classic Ford with ease at the end of May 2009. Despite the heat he did not miss a beat. Damn decent fuel economy and the levels (coolant and oil) were fine before, during and after. Turned a few heads as well! On to the price - We are looking to sell for £2200 and feel this is a justified figure given its rarity and fabulous, as-original condition. We are open to sensible offers though so please get in touch if you're interested. Drop me a private message or email me at jonnymarin@aol.com. For a true MK1 Fiesta enthusiast this could be a once in a lifetime buy and the value of this truly historic Ford can only increase. We are very much aware of this, which is why we're pretty saddened to have to move him on.