Vehicle Details for Mark 1 Ford Fiesta B654 **A 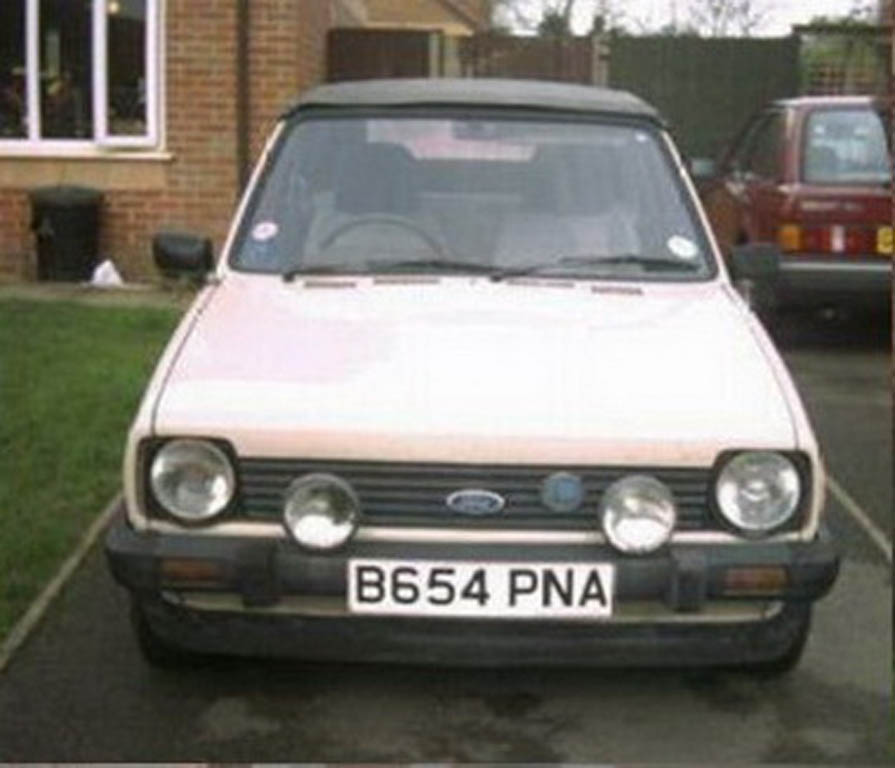 Below: This F. English 1.3S, registered in August 1984 was the last known MK1 Fly built at Poole works, unless of course you know different, in which case we would be delighted to hear from you.

This particular Fiesta Fly is an unusual one, for a start of it's beige, which isn't a standard colour for a 1300 sport. It's also registered on a B plate, however that can be explained by the F.English conversion leading to a later registration.
The first mention we received of it, was that it was on display at Ford Fair in the mid 1990's, reportedly without the the XR2 bodykit,headlights and 13" RS alloy wheels.

Recently Dean Martin contacted us to fill in a little more detail from this period, he purchased the car in 1994, and had it maintained to the highest standards. A valeter by trade, he had the car polished to perfection and supaguarded daily(even under the arches), seats and plastics were again daily cleaned and sprayed with Supaguard so became stain proof in the end! During Dean's ownership, the car won Ford Fair's cleanest car at show award. At that time the car was fitted with RS alloys with metro turbo tyres 185/55/13, a new custom made roof, new rear Perspex windows, XR2 lights and grill and lowering springs.

The car resurfaced on Ebay in February 2004 (the source of our earlier pictures). With 22 hours left to run it had been bid to £360, but the seller, who was from Nuneaton in Warwickshire, already had a higher offer from a private ad placed elsewhere. The car didnt reappear on Ebay so presumably it was sold on at that point.

The next time this car reappeared was in 2012 when it was listed on eBay in Penicuik near Peebles, again using the same pictures. I (David speaking here) flew to Edinburgh with the mechanic who rebuilt my own Fiesta, and spent half a day going through it. At this point it was in a dismantled state, similar to the 2019 images now show, and needed major floor sills etc amongst other things. At this point the car was dry-stored in a warm garage and does not appear to have deteriorated between that point and it's 2019 re-emergence.

This car has been fitted with optional accessories in the form of the RS option 7 spoke 13" wheels and XR2 headlights, spotlights, bumpers etc and one or two other internal items. Curiously it is wearing a Mk2 XR2 plastic rear bumperwhich lends support to the report that these modifications have been fitted by a later owner.

The car is also fitted with a towbar, for those of us who have studied the towbar fixings on a mk1 or 2 Fiesta, you will know that there are no chassis legs etc to take the load, so even a standard shell isn't ideal as a tow car, let alone a convertible. 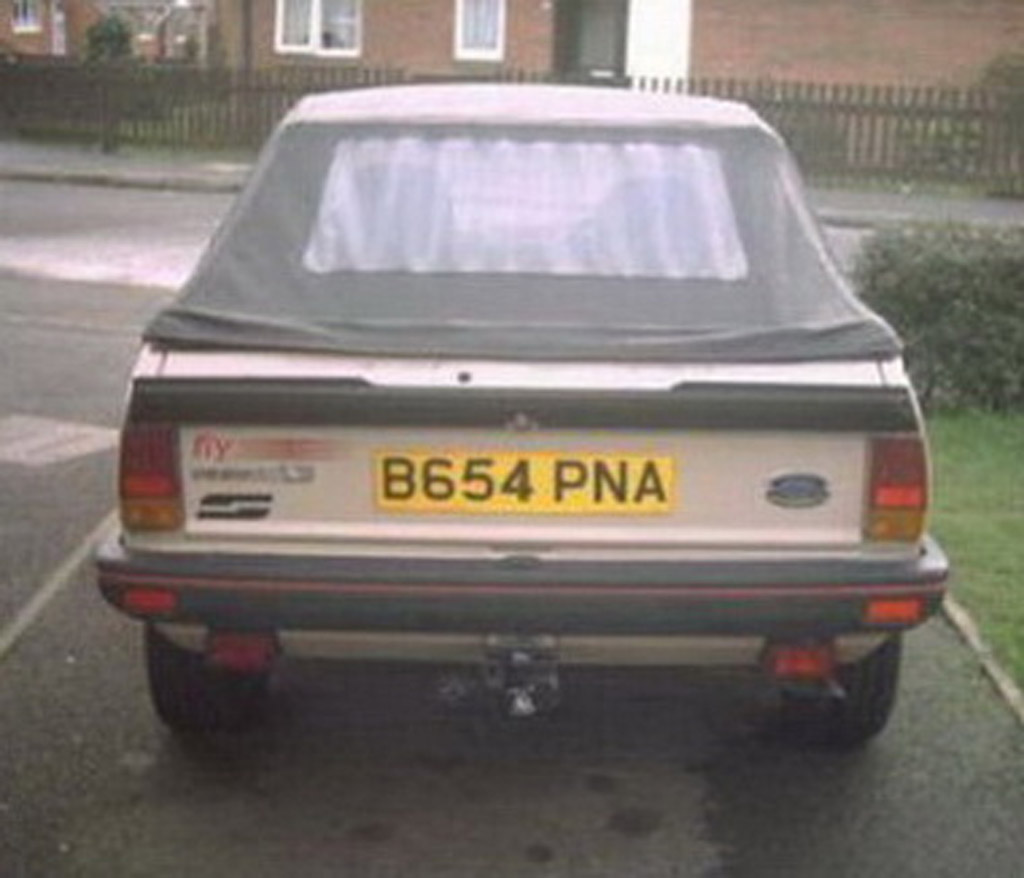 Below: In 2019 the new owner of this Fly contacted us, he has begun an original rebuild. Any previous information on this car, or prior images would be gratefully recieved. 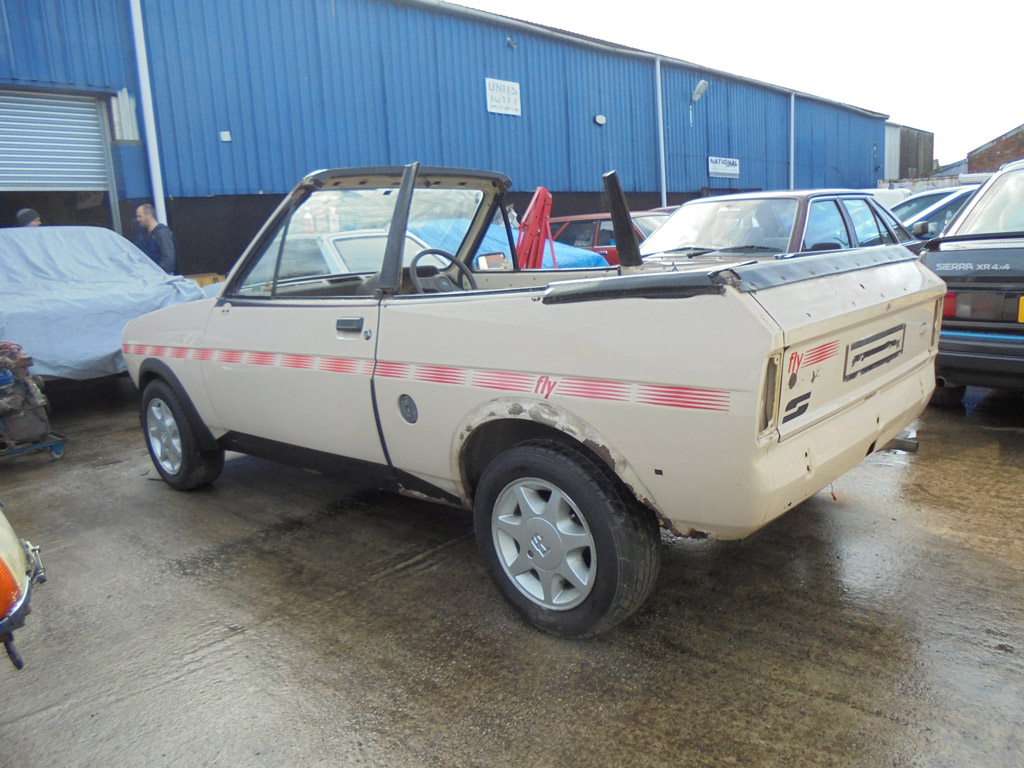 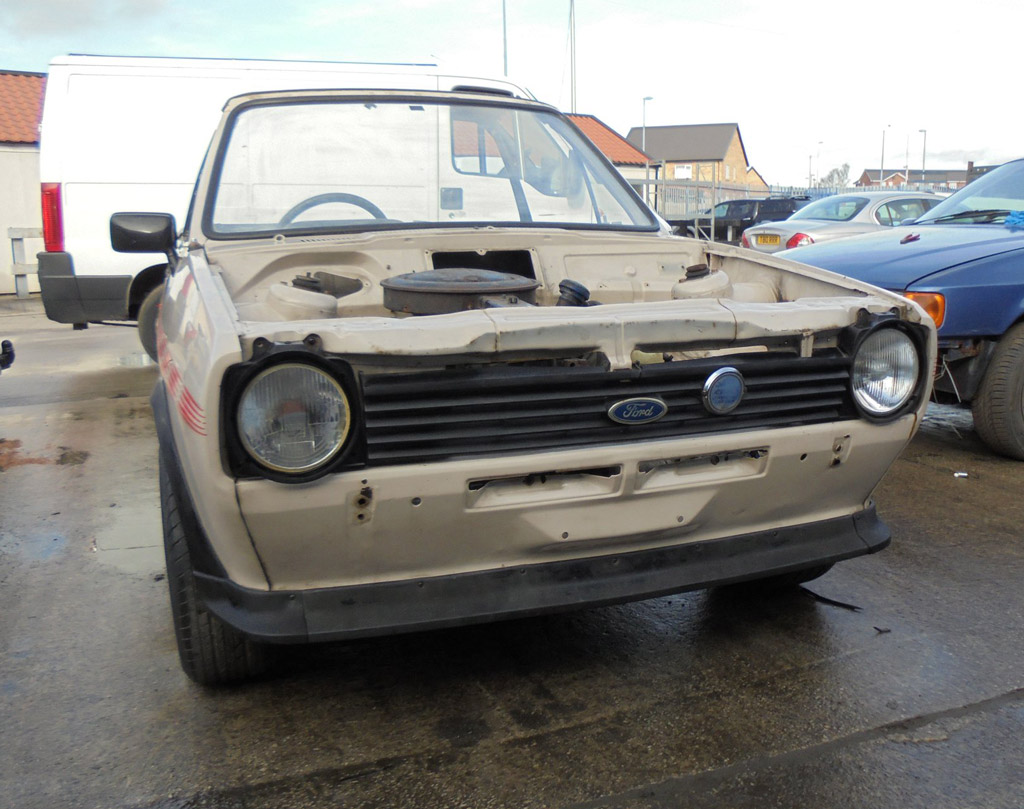 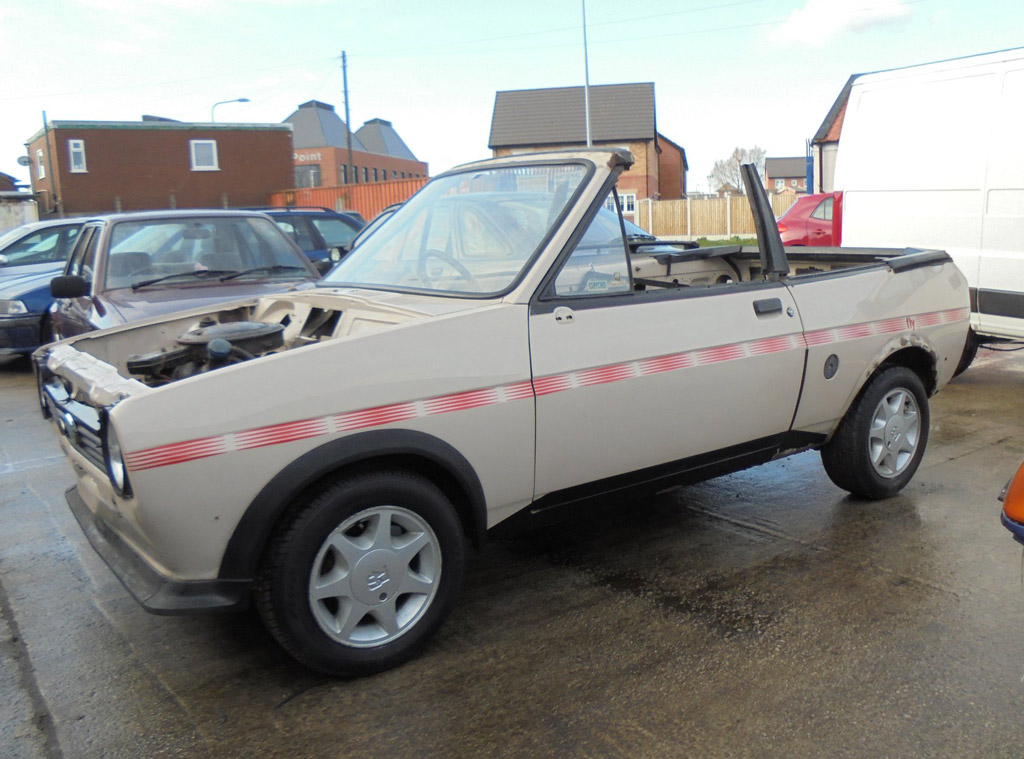 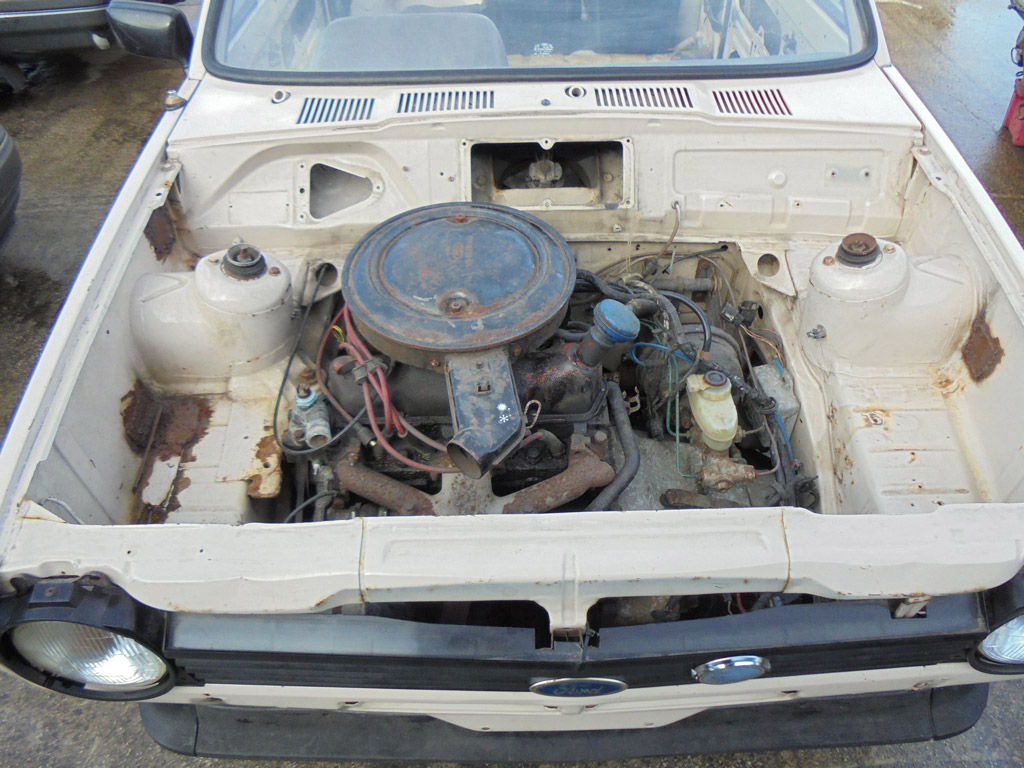 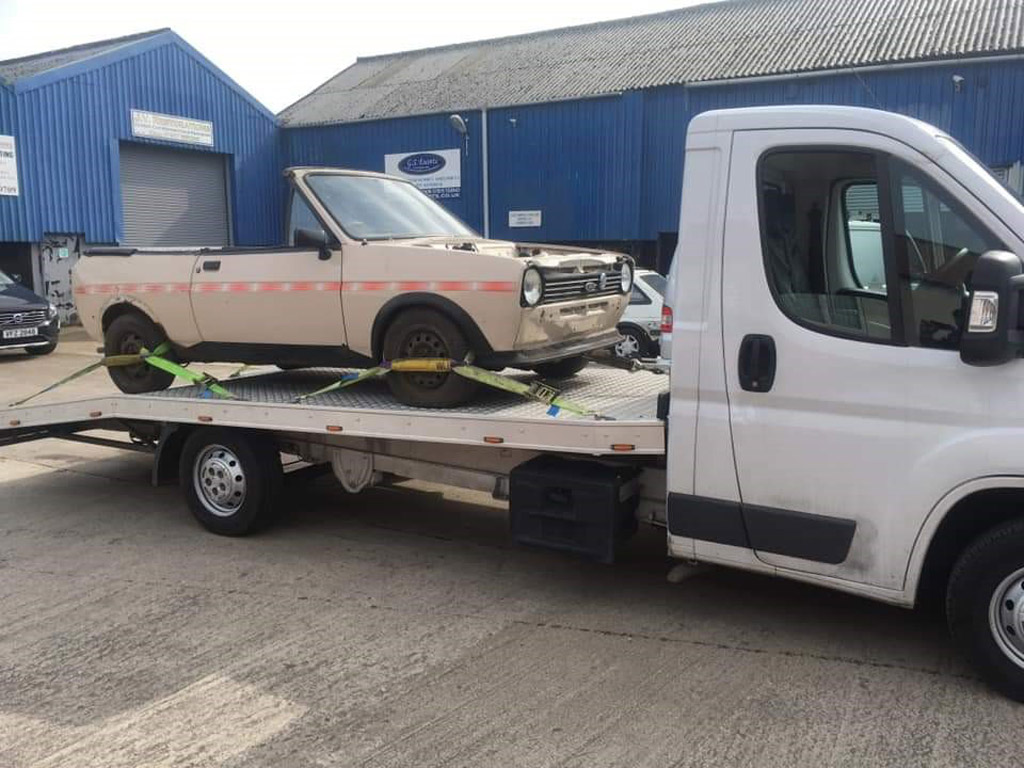