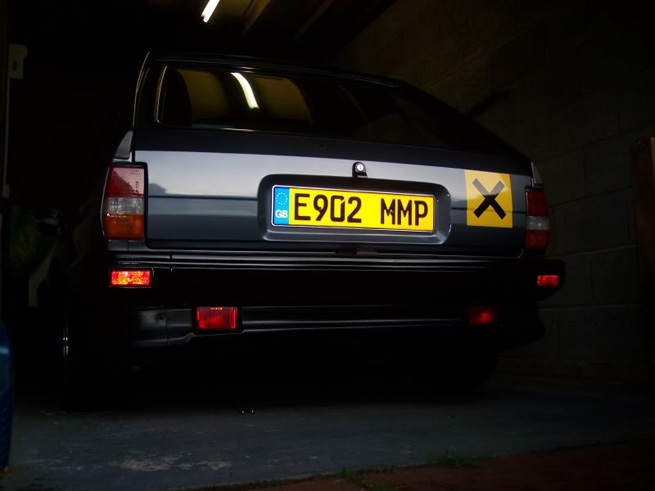 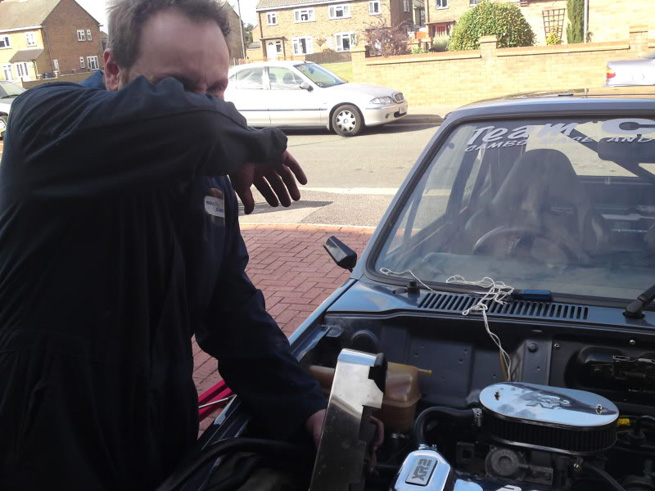 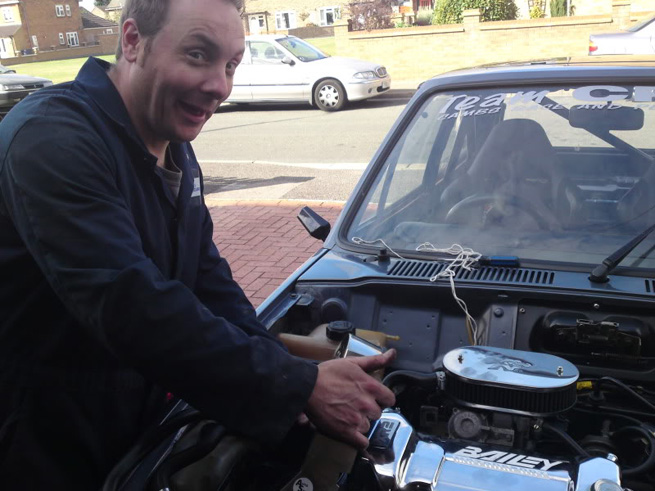 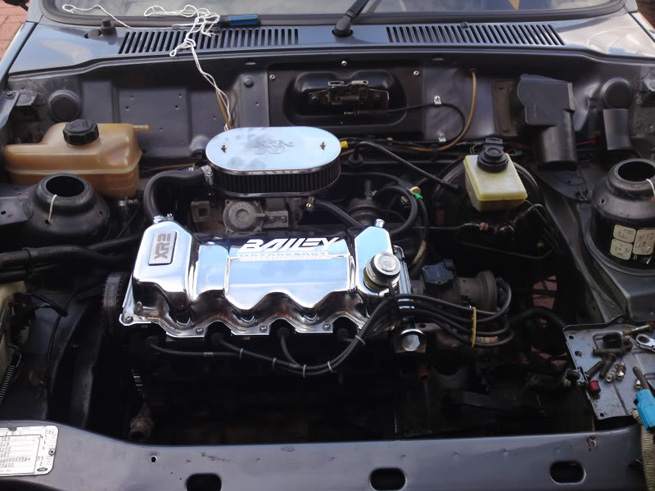 Once its fitted I'll get it trailered to Toms (as its SORN) to set it up ready for next year.

The engine bay is done, new coat of Mercury grey, wiring loom is now wrapped in plastic coil making it accessable and super tidy.
The servo, header tank, washer bottle, strut tops, belt pulley and various other parts have been treat to some matt black lovin and after scoring a quality deal involving swapping the wrong clutch for a strut brace Ive got that to paint this weekend.
My bike carbs are almost ready and when Peanut finally removes the exhaust manifold from his car I'll be almost ready to fit the Zetec.
I want the engine in by Christmas. I dont care if its not running, just so I can do the other bits, plumbing in the rad, sorting a cool exhaust etc in my own time.
It will be good when its done but it seems along way off ATM.

What a productive night. Monumental thanks again to Jonny S for his help again last night. We managed to get the engine stripped of all old ancillaries, replaced the cambelt and all that goes with it, fit my new clutch and mount the box. I've just got to clean and paint the engine and throw it in the hole..... If only it was that simple. Pic of the freshly painted engine bay and all the matt black lovin so far. 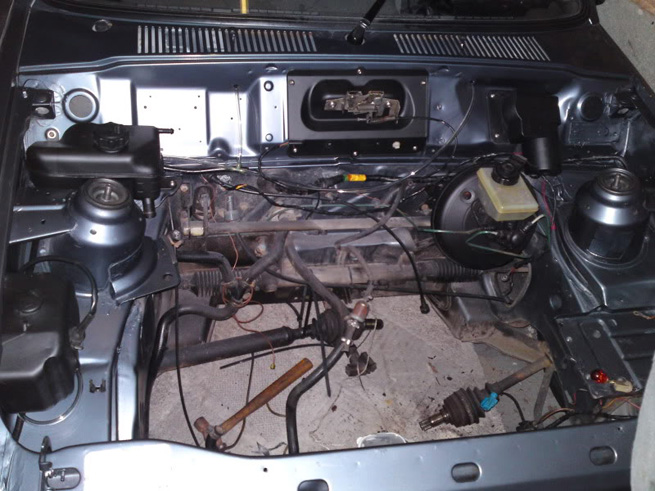 The weekend has arrived!!
The engine is painted and together, just gota pick up afew last minute items from the motor factors but the engine is going in tomorrow!! Alittle good weather would be nice because although I have a garage its not that wide so my drive way will need to be used.
All members of team CRAP (Cambs Race And Performance) will be in attendance so good progress is on the cards.
Jonny Stannard is on a mission to get it in and running but Im not so sure due to all the little bits to be done but rest assured I have 100% confidence it will be a good day.
Progress report and pics soon. 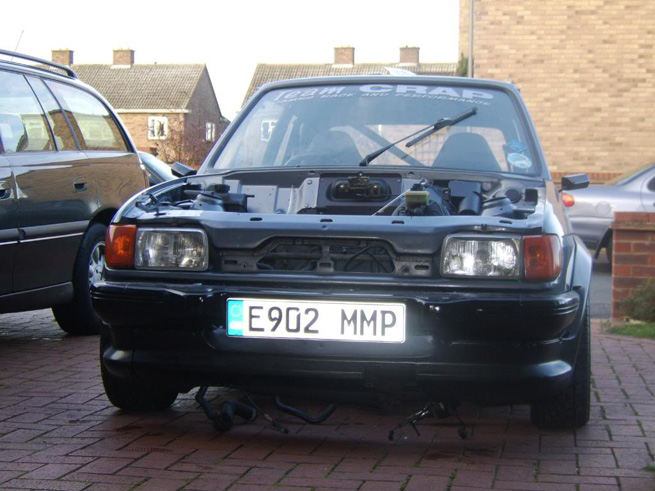 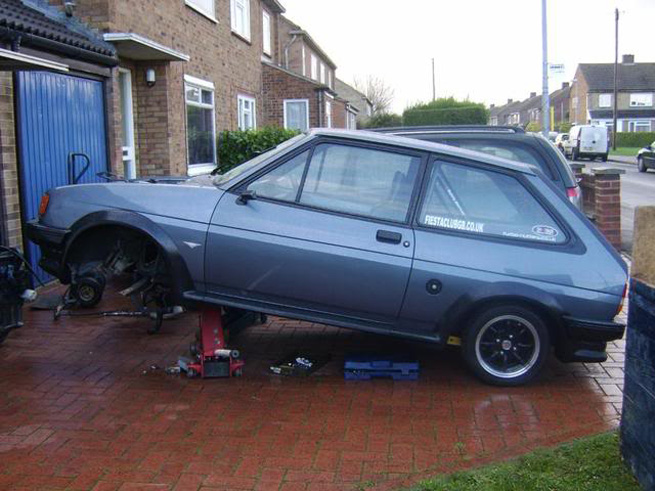 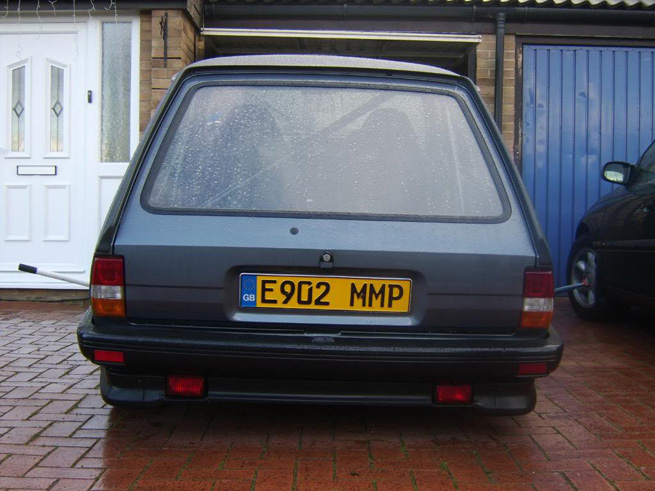 Getting sh!t moved about in the bay ready for the Zetec 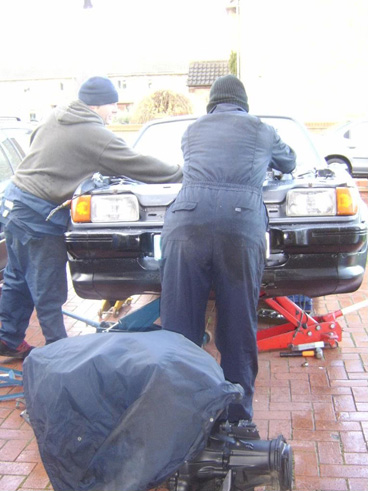 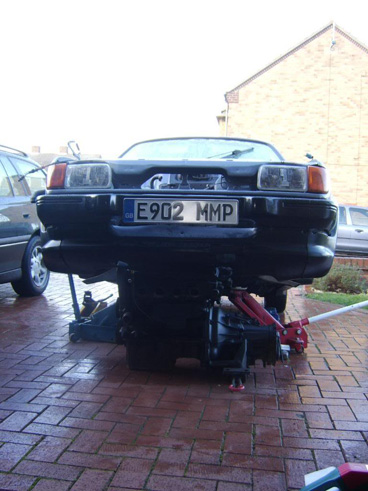 Shes in, time to do up the cradle 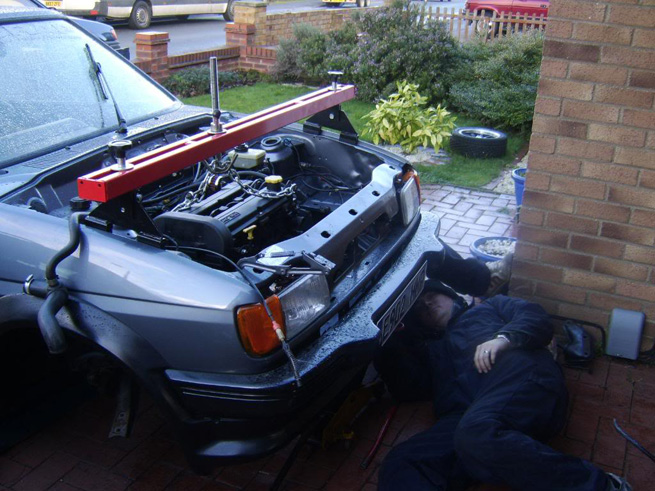 Was it the long bolt or the short ones?? 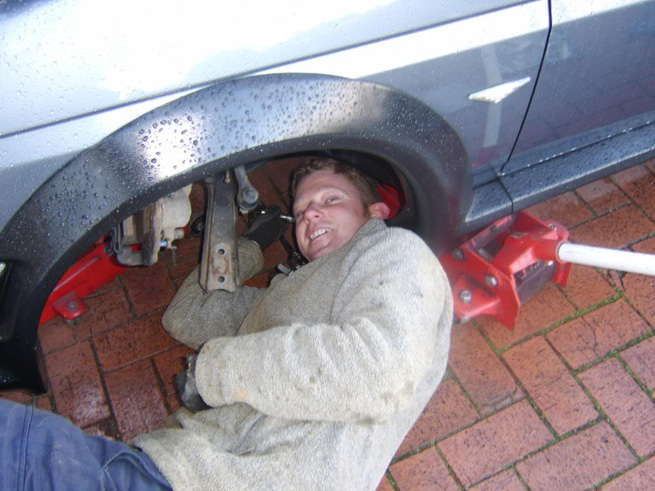 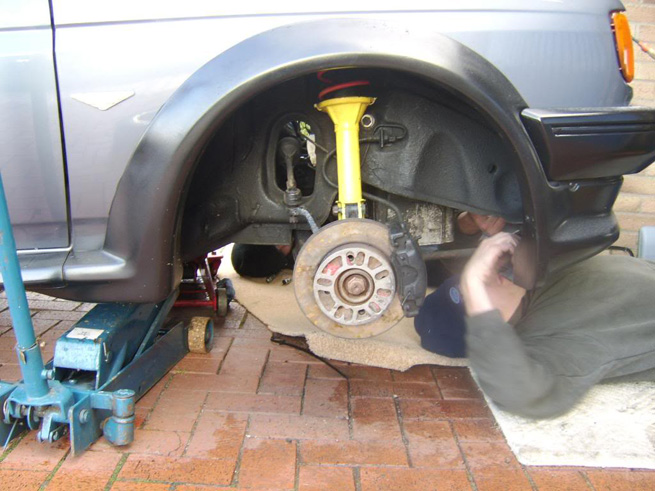 Whilst Jonny and I enjoyed a spot of lunch, we thought that we could let Ady loose on his car, under STRICT supervision 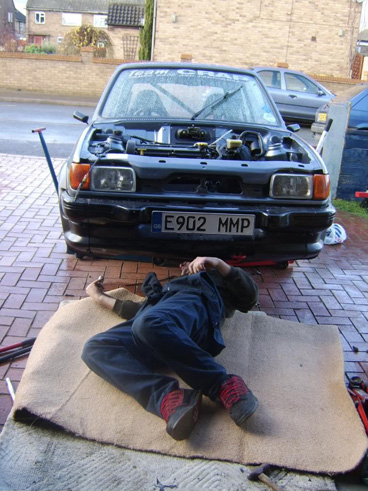 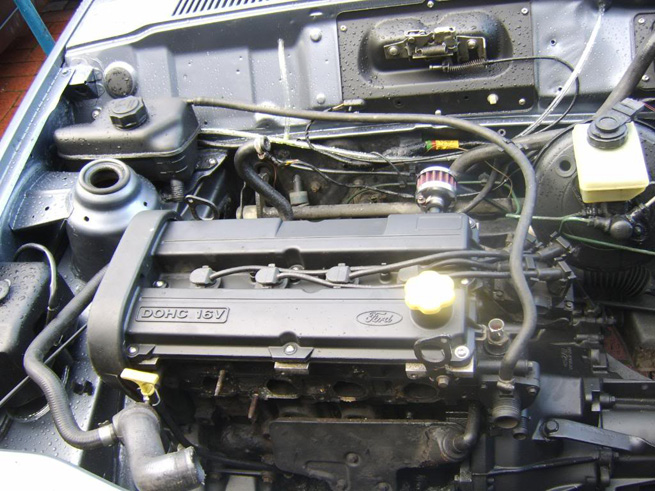 With the carbs and manifold offered up 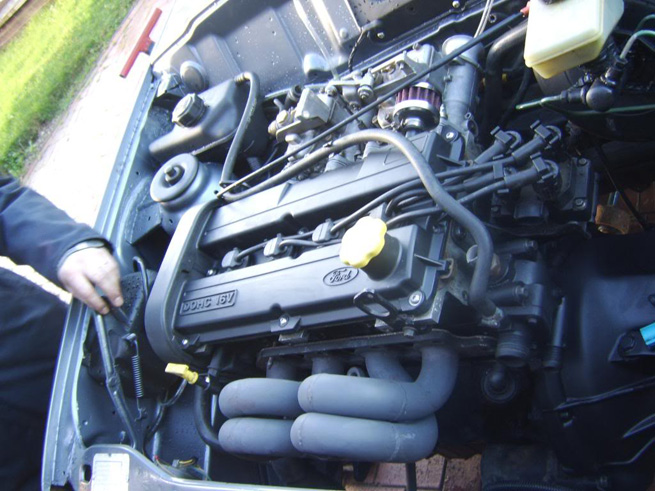 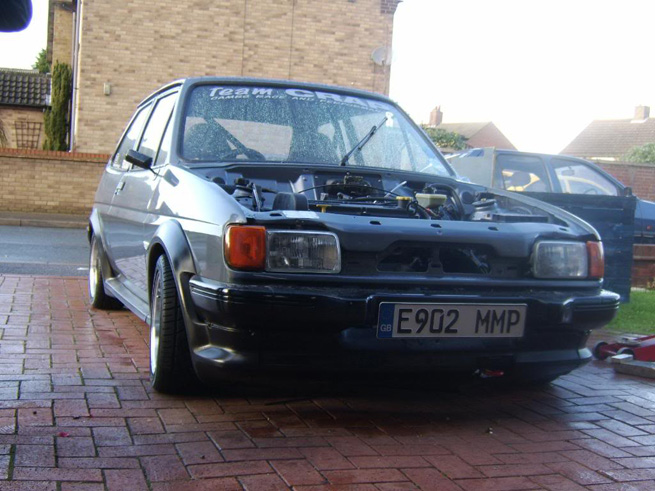 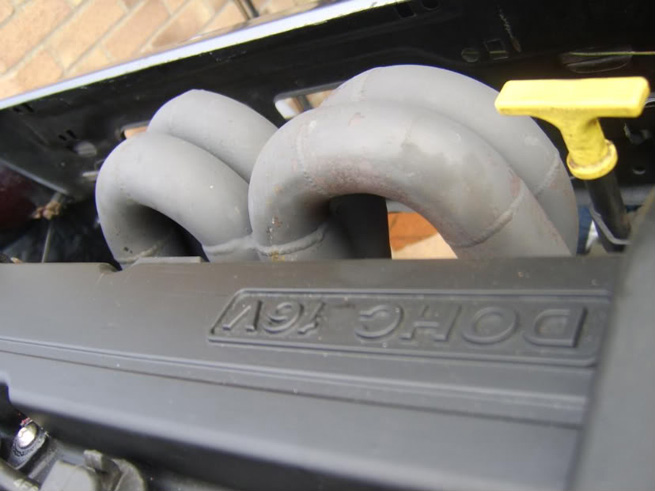 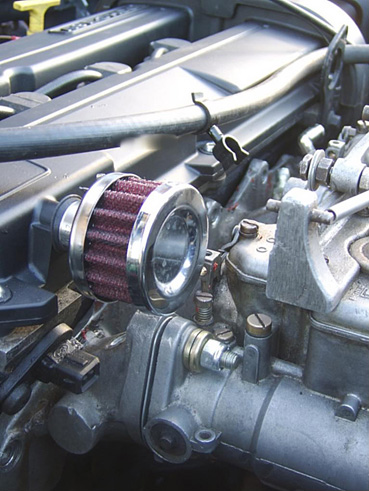 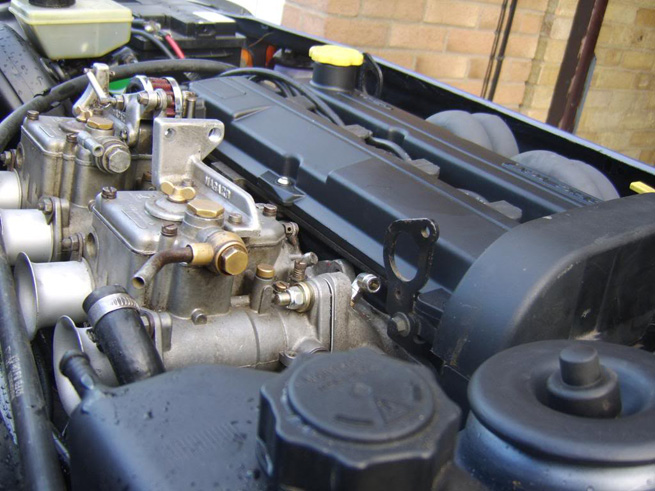 Its fair to say I was having a bad one. Everything I touched turned to sh!t. I cross threaded, dropped, lost, snapped and broke off almost everything I touched. In the end I made the coffee and Tea and worked on the car when the other two supervised.......

HUGE THANKS to Jonny and Nathan who's hard work and banter made for a good day.
Just afew more little jobs to do before we fire it up but with work and family commitments it will be after christmas now.

Yesterday I got the carbs assembled with there vacuum, mounted the T piece and 90 degree fuel pipes, ran the lines to the regulator.

Today I went to the scrappy for some hoses and I found an 'OE' battery cover. When I returned I fitted the exhaust manifold, radiator, spark plugs and offered up afew hoses I'd got to see what I could make. I'm at that fiddley stage where Im doing little jobs that seem to take a decade.

Tomorrow I need to place an order at Burton Power for afew exhaust related items before going back into the garage to tidy the wires on the bulk head and get the carbs fitted. Bosh in the oil pressure adaptor for the gauge without snapping it off in the block and it should begin to look the part.
I have to go back to work on Thursday for the day so will take my top hose into the workshop for some adaptation. Its really coming together now .....
I'll get some pics once the carbs are fitted.

All water hoses fitted!! After some proper head scratching and research I'm there!
Running an RS1800 zetec out of a MK3 Fiesta, using a larger capacity radiator from a Sierra, in a MK2 fiesta was never going to be factory fit, but I'm there!!
Using Zetec hoses I got with the engine, some I raided from a KA at the scrappy, and the original XR2 hoses I got it all together including keeping the heater!!! BONUS!!
Thanks to everyone who offered advice. It was a real help!!

Luke is bringing the side exit exhaust on Sunday, just carbs and alittle wiring to do then its time to fire it up