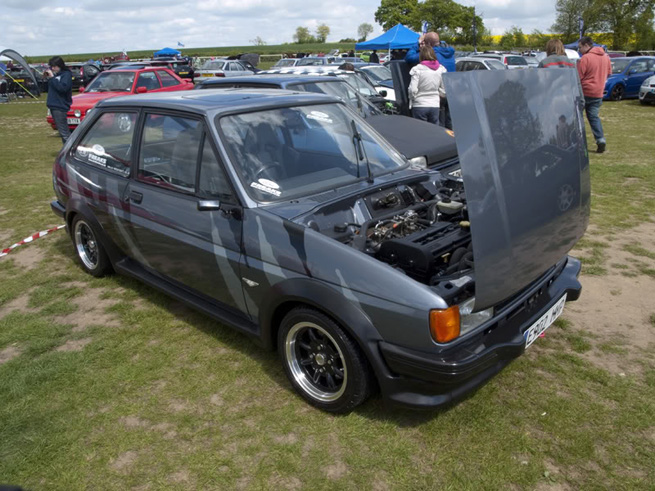 Nothing major to report

Well its been a while since I updated. Nothing outstanding to report.... I managed to get one of the new webcon external return springs for my carbs, alittle more piece of mind than the linkage return I through together. Its been running alittle poor, spitting back throught the carbs and just doesnt seem happy. After talking to a number of people the same conclusion of an air leak seem to be the culprit. Last night I took the 40s of the car, and are now stripped from the manifold. I have new O rings and mounting washers to fit, not to mention the new inlet manifold gasket and I hope to get it all back together tonight.

Fingers crossed that will be it .

1st July 2010 • 11:45PM
p>I did the Uxbridge meet last night eventually..... After having the car to bits I didnt test drive it and when I got on the road to Middlesex from Cambridgeshire it was down on power and felt flat. I turned round and tightened the carbs to the mani thinking it was an air leak from the O rings. I took it out again and it felt flat and as I was about to turn for home and admit defeat it suddenly cleared and felt better than ever! :? Pulled well, didnt spit back and tick over was good so I just carried on to Uxbridge. 175 mile round trip with no issues what so ever. Had some fun with an Alfa in the A1 and it felt strong so what ever it was has cleared. I dont no what it was and to be honest I doubt I ever will.

Santa, Pod I ran 15.6, previous best was 15.9.
The RWYB was mint, only 4 minutes between runs!!!
Only reason I stopped because I was almost out of petrol!!

I'm off work this week so I took the car for its MOT. It went through with no issues having covered less than 1000 miles since the last. I went to alittle gathering on Wednesday night which turned into an un-official RWYB. The car went superb but developed a minor fuel leak from the top of the carbs. I took the top of the carb to find the float had stuck open. A quick clean and it was spot on.

I'm already planning and researching for its winter make over.I'm going to ditch the webers in favour of either a set of T/B and management from Northampton Motorsport or some bike carbs and management from Chester Sportscars. Northampton Motorsport supply, fit and map the weber alpha T/Bs and are just over 20 miles away.
I hear some good things about the Chesters Sportscar tuner kits which they can also supply, fit and map, they are way less money than the weber but they are 140 miles away.

No major updates apart from me making some Perspex windows at the moment. My rear screen has been in a year now and although it has some scratching it seems to be trouble free...
I took it to TRAX at the weekend and I managed to get there and back (140 miles) on the same tank of fuel which as anyone with carbs will tell you that

After a lazy few months (not really, been training for a charity run!!) I finally got out in the garage.
The car is now on axle stands, gear linkage stripped and a Rally design quickshift kit sat in the lounge much to my wifes approval.
I've begun peeling back the window rubbers ready to pop out the glass, for some lighter replacements and diagnosed a split CV boot causing aload of sh!t spraying up my inner wheel arch.
The QS kit looks fairly straight foward so I want to get that sorted first, before tackling anything else.