Work to the floorpan 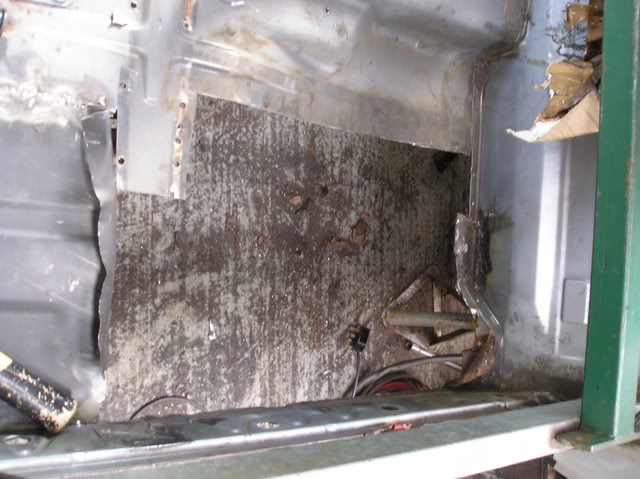 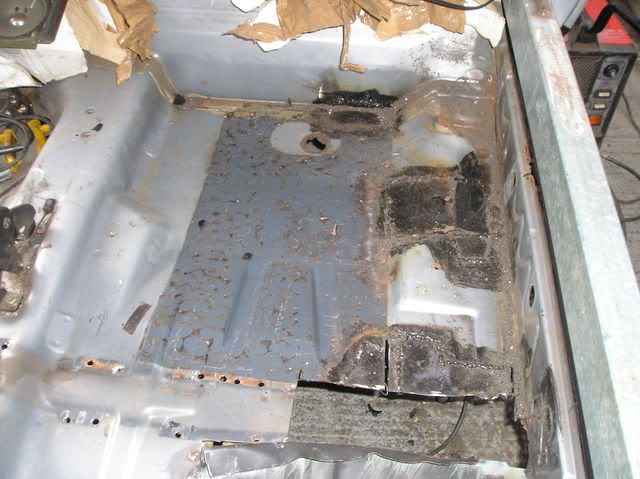 The seat crossmember was then removed . It took a lot of bashing and drilling to get it out.The I cut out the rear floor first neatly along the line the new bit welds to and then butchered the rest with the big grinder. I've cleaned up the inner sill where the flange was but it needs more work and possibly a small patch near the jacking point.Took most of the day to do this lot (around 6 hours) to get it all aligned etc. Progress is being made if slowly but its hard going.

Did a little bit more today (I am working next 4 night shifts).The rear passenger floor is trimmed up and almost ready for welding in. Unfortunately the inner sill needs the bottom 20mm replacing as grinding on both sides and rust has made it a little too thin.It would do (but not for me as the rust has to go) I also cut out that patch at the back of the floor as it looked cack. 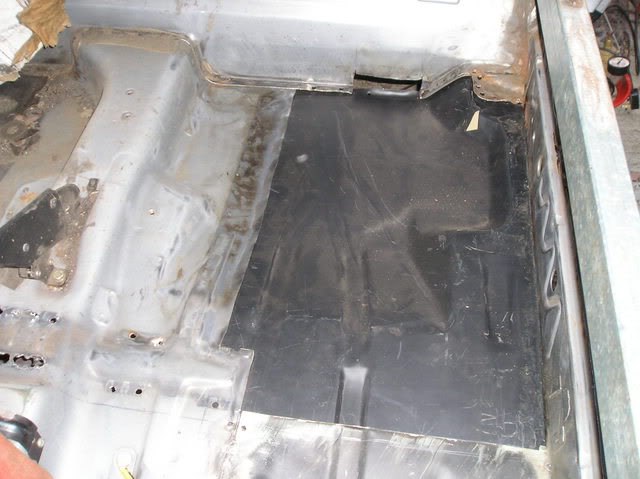 Tune in text week when hopefully will have another update, must sleep now before work.

Had to remove the botton inch of the inner sill to get the rust out.Then I welded in the pass rear floor pan.Thats all 4 pans in now thank goodness. 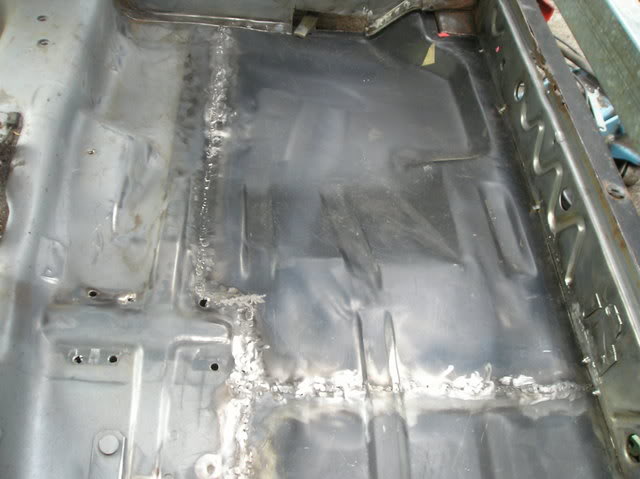 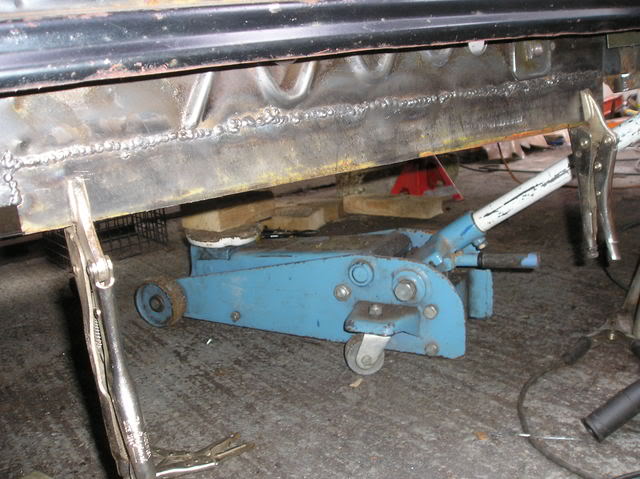 Cut of rest of sill then found some rust in the chassis leg.At first it lookedreally bad and when I hit it with a hammer a crack ran down the side of the leg in view all the way. Thought it was going to fold as the axle stand was pushing up on it from underneath. Removed it and placed elsewhere ,luckily other inside and top and totally solid but just goes to show you what lurks unseen . First you would have known is axle pulling out of shell. Got it welded up for now but will give it another run on full power to get it solid as was hard to weld.I was cutting a piece of steel out of a girder and looked down as my leg was getting hot, no wonder..I was on fire. No harm done luckily but a hole in my jeans. 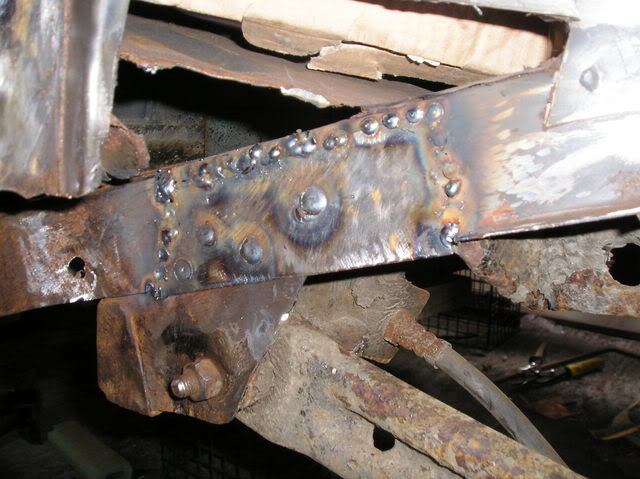 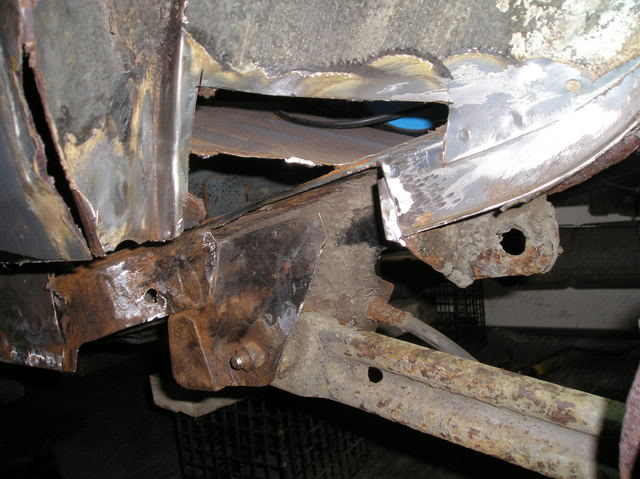 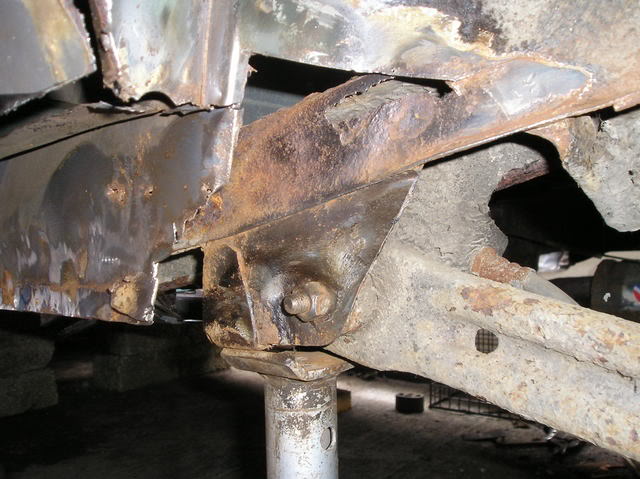 I started here on the other side and the leg was fine. Was rather surprsied when I found this.Now I always give any suspect steel a whack with a big hammer...Usually it then falls on the floor. :( Is there no end to this rust.I think the front track arm mounts need work too.Is this the rustiest fiesta to ever have an MOT?

Almost ready for the sill now. The arch is closed up and I seam welded the chassis leg to the arch panel and the suspension mount..shouldnt fall of anytime soon. Took ages to do these little jobs today.Burnt anothor hole in my jeans as well.Put in wire reel number 4 in the mig. Back to work tomorrow again for 4 days. It seems like ive a weeks work done already. 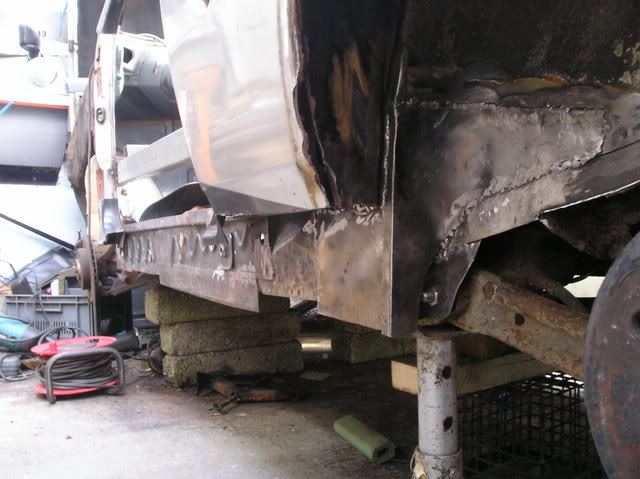 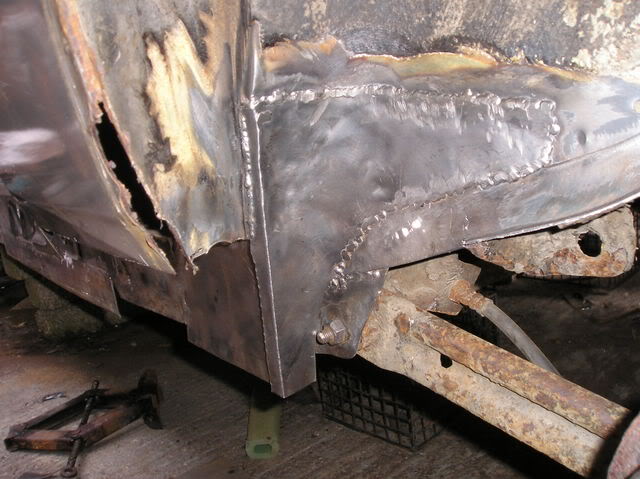 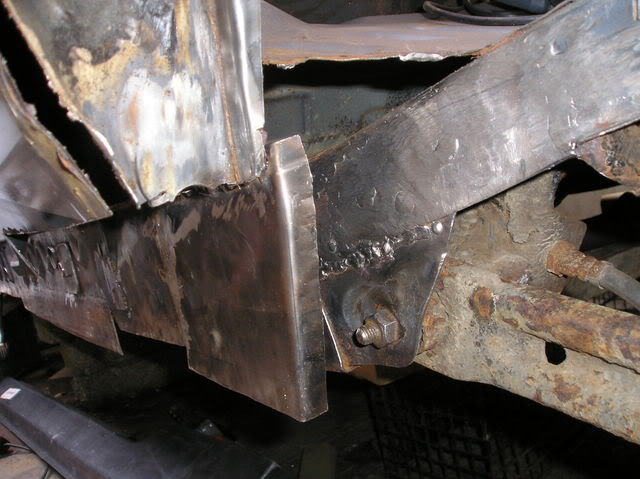 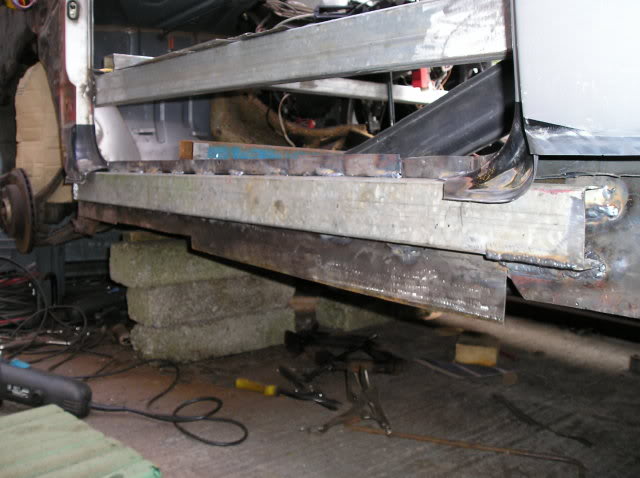 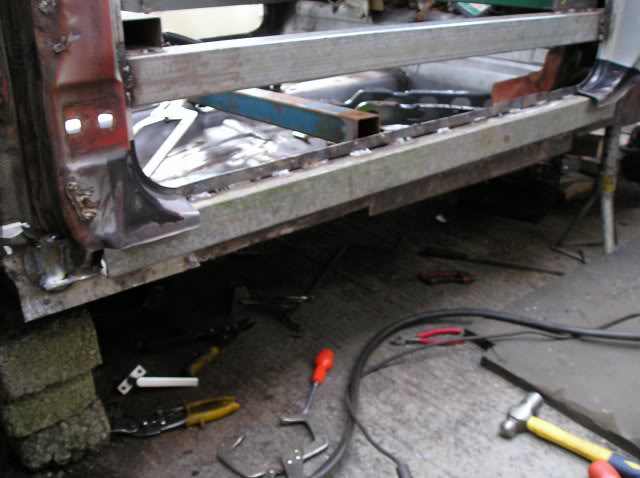 Cut out the strengthening beam so it would fit tight against the inner sill and then seam welded it in.Had to weld a bit of box from inner sill to seat crossmember temporarily as inner sill had moved a cm out at the top with all the work on it. Levered it into position and tacked it.If I had welded the strenthener in when I was finished it would have been to strong to force back into position.The distance from inner sill to inner sill at the top is 127cm.(luckily I have another car sitting behind to take measurements off)Expected to have outer sill on but things just took too long. Not surprisingly the inner sill is now very solid. Yet this will be invisible with the outer sill on.

i would like to have taken it right back to the wheelarch but it curves a bit where it meets the chassis leg so i just couldnt get it to sit flat.It overlaps the chassis leg a few inches anyway and as it uses the inner sill to form a box section as the forth side is now very rigid.Its a pig to fit though with the pressings in the inner sill need cutouts on the box to allow it to sit flat but im happy with the results.The bit in the centre at the jack point I left solid as there are no pressings there for additional srtrength.Both sides of the car have been done now. 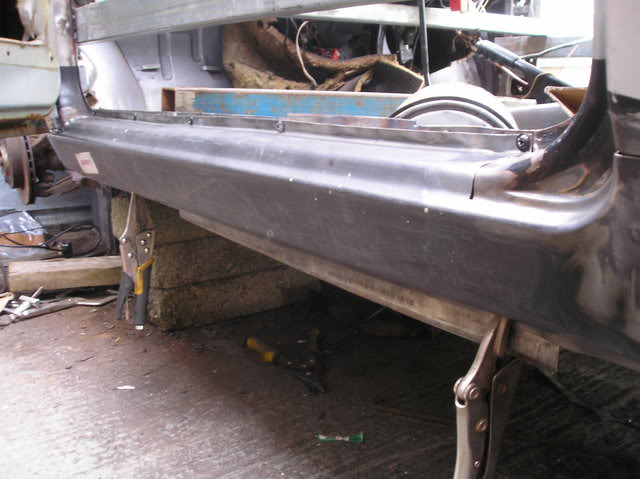 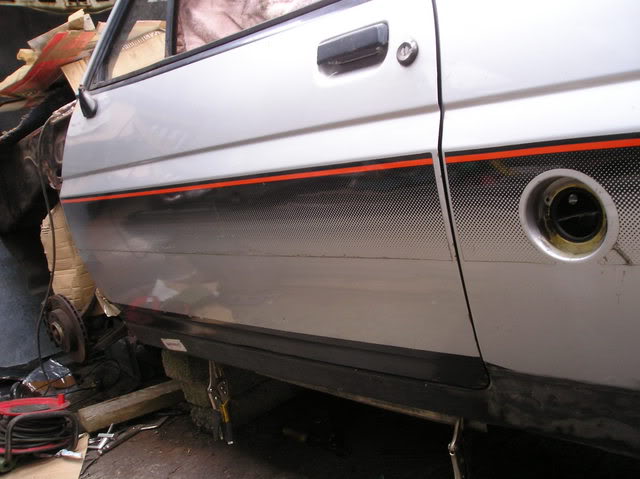 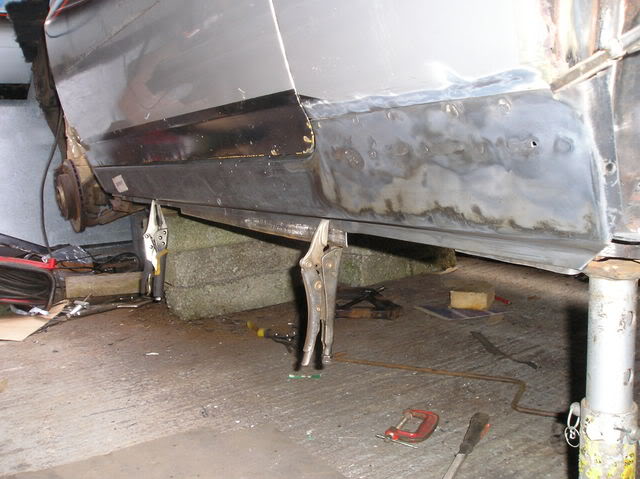 Trial fitted the sill this morn.It is not touching the door at the bottom but looked like the gap narrowed as it went towards the front of the car.It looks like the door just needs moved as the gap is wider at the top rear of door as well so door needs centralised more.I welded a bit of flat steel behind the rear end of sill to help keep the join to 1/4 panel level but warped the end of sill a bit.A lot of panel beating later and I think it is near enough ..will need a very thin layer of filler to make perfect after welding anyway.Taking tomorrow off to go to a vintage/car/tractor /steam rally .

The drivers sill went on beautifully but this passenger sill is not sitting right yet and I warped it be being careless trying to seam weld a plate on the back( to give an invisible jion into 1/4 panel).1 inch welds ,,,when i turned it over it was mangled.The sill gap is too small at the front as well.Methinks this sill is coming off again as I have another spare.No doubt about it sills are very tough.anybody can tack one on but to get the gaps right and the arch at 1/4 panel flat..thats a different story.Make sure you refit the door and check gaps at bottom as its too late to find after its welded that it touches the door when closed....I did that on the silver car you can see in some photos that also sits in the garage.

Bought some wings and bonnet as it was rumoured that hadrian had stopped producing mk1 panels.Turned out to be just a production pause but made me get my finger out and get some. :D Be a while before they have any chance of being fitted but hopefully get some time soon to do a bit.

This arrived in the post, a series 1 rs turbo lsd to eventually go in the xr2 4 speed box.I hope its working. 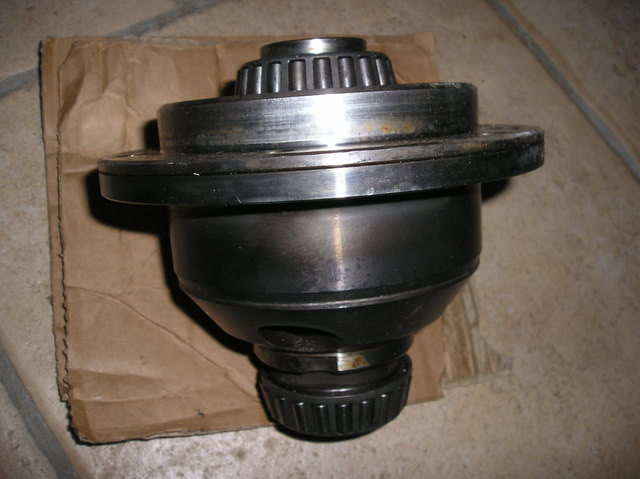 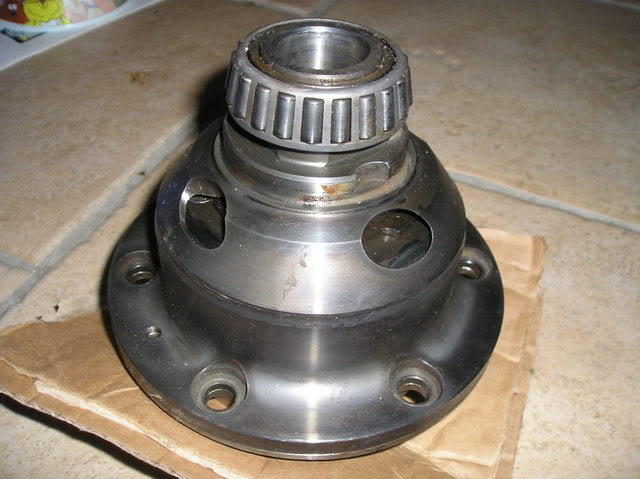 The good news is we have now got a nursery place on Mondays for my daughter so some free time to get welding again. The not so good news is im working the next 5 mondays as thats the way my shift has rotated round.

A small patch and an overdue update 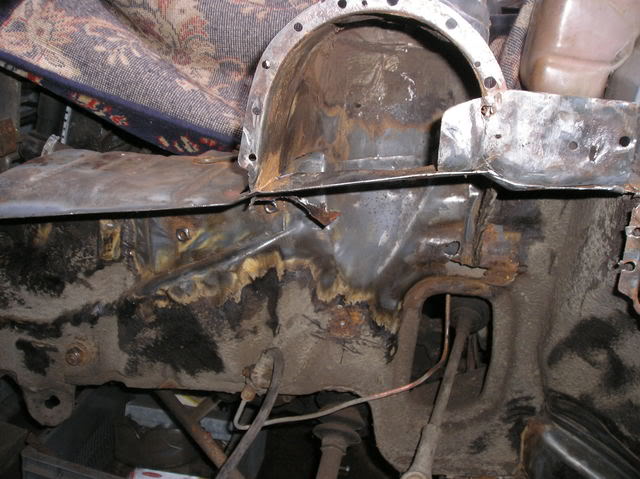 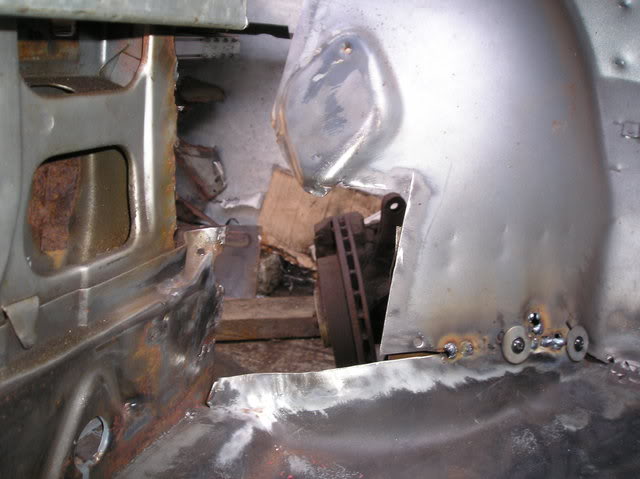 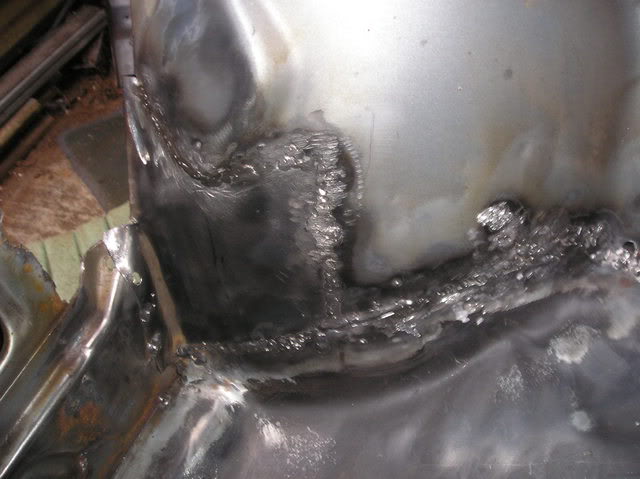 Well time for an update at last.I cleaned up the inner wing a bit( not as bad as drivers side) and then welded in a patch in the wheelarch.What with one thing and another havent had any time for the xr2 but will have some free time from now on.The patch was quite difficult and took a few hours to get right with many a hole burned.