NO progress last week as had the flu again ,still not over it but got the seat crossmember welded together and mostly welded in today.Took quite a bit of time to make the 6 inches of it that had been welded over before.Feels a lot more solid than the original bit anyway. 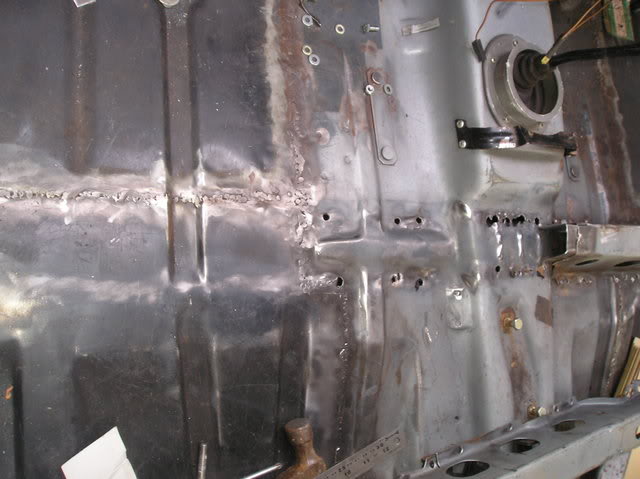 New sides of crossmember tacked on: 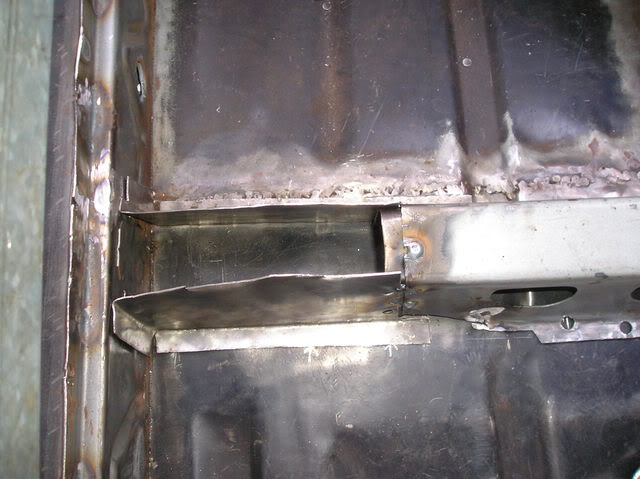 All back together and welded in: 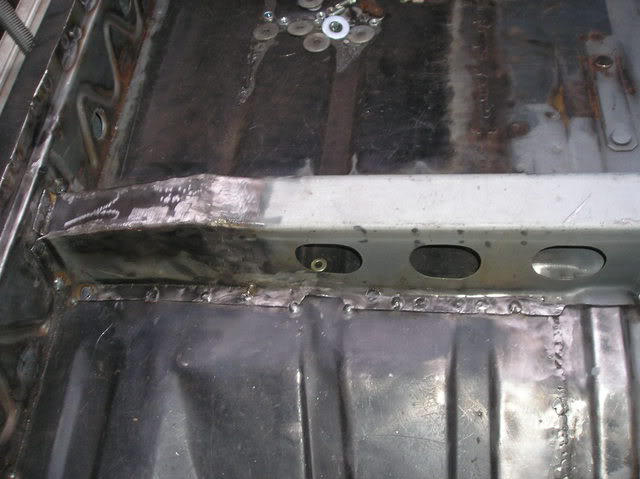 Got the driver side floor strengthener remade and welded in today.Took ages to make and sits out slightly more than the original in the centre but thats as close as I can get it.As i move round the car there is so little room in constantly moving stuff.Its a bit of a pain.The other car in the shed might get thrown outside soon. Looks like I will be baby sitting tomorrow so thats it for this week. 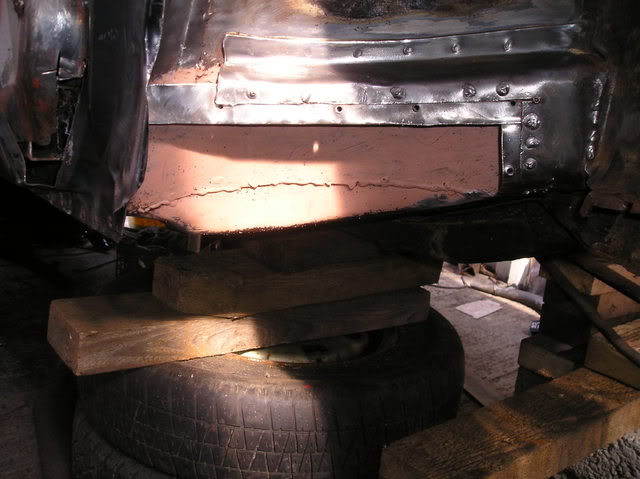 The drivers inner wing gets tickled with the welder

Made quite a few repairs to the drivers inner wing.It had more holes than a teabag.Its looking a lot better now.Then on to the door post and made a repair for the bottom which took a lot of time and plugged a few holes up the door post which I made removing the wing. I had been working on a fire damaged xr2 and got the engine to run,fitted a new loom but the more I did the more needed doing so have gone back to this car. 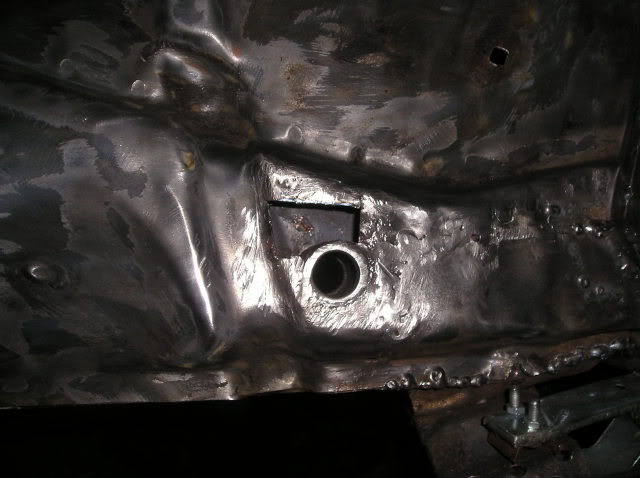 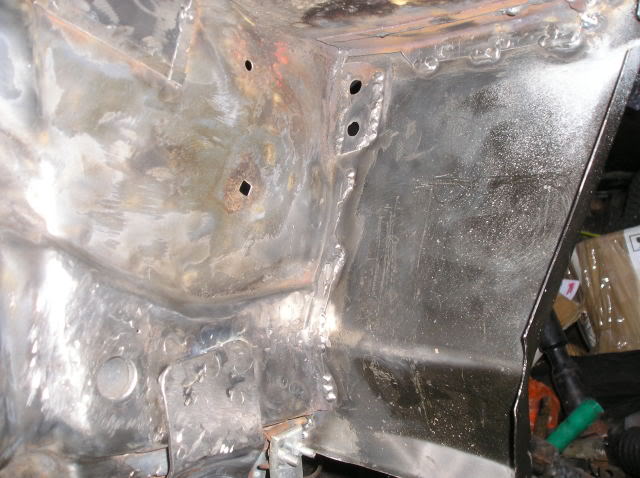 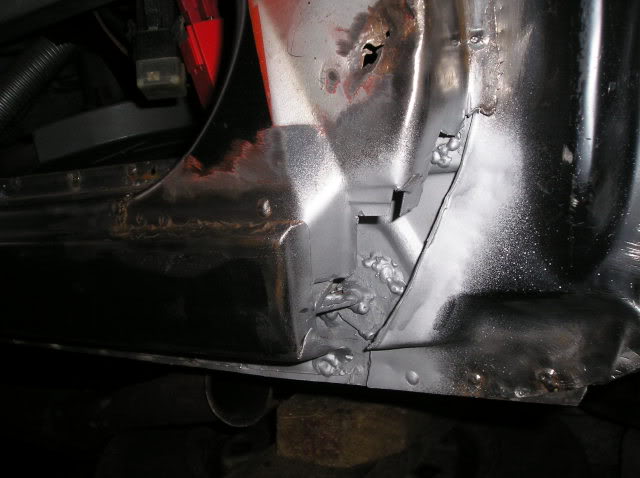 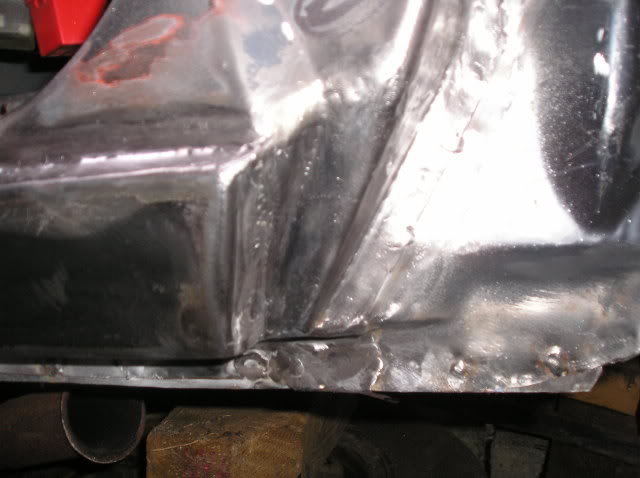 I trial fitted the drivers wing and door and fitted the bonnet to see what the fit is like.The wing sits out a bit at the bottom but other than that is ok.Should be able to sort it as the door post closing piece is holding it out.

Gaps look ok otherwise.The door is a new mk2 item and has minor dents but they are not exactly easy to find these days. 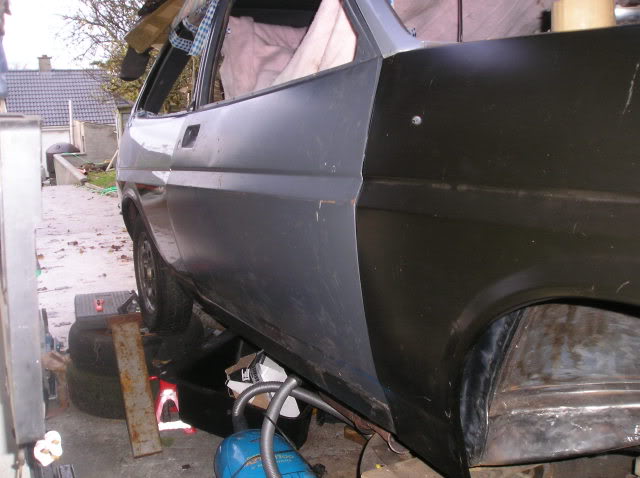 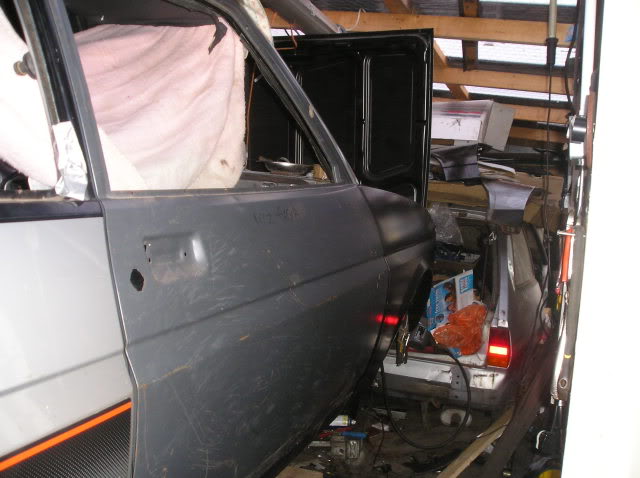 I tried on the pass wing but it needs more work and wont be so easy.

Ran out of welding gas too...bottle lasted 12 years so not too bad.Lasted longer than the old welder. I have more repairs in the pass inner wing but just had to know if the panels fitted ok or not. Almost looks like a car again.

All about the wings

Ive been tiding up the pass inner wing.The strut strenthener had to be moved to the side to fix this hole.Same hole was on drivers side looks like it was flexing due to hard suspension.When I removed the underseal there was a big hole.Seam welded the strenthener back in so should be solid now. 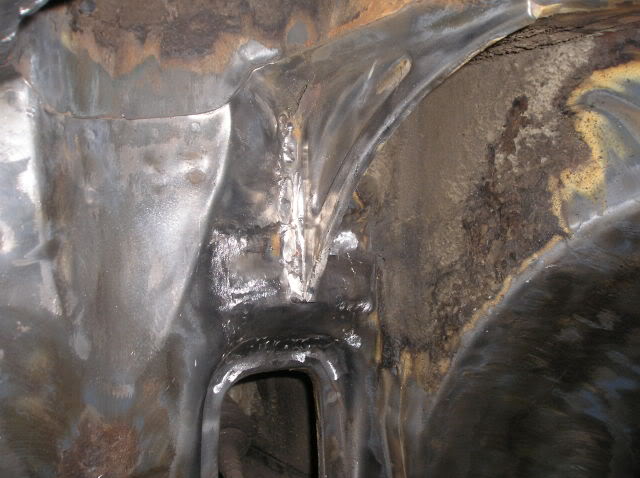 Had cut the end flange of the wing mounting rail as it wasnt allowing the wing back enough.I trial fitted and worked with the wing today and got a reasonable fit so welded the piece back in again.Wing /bonnet alignment takes ages and not fully there yet but close. 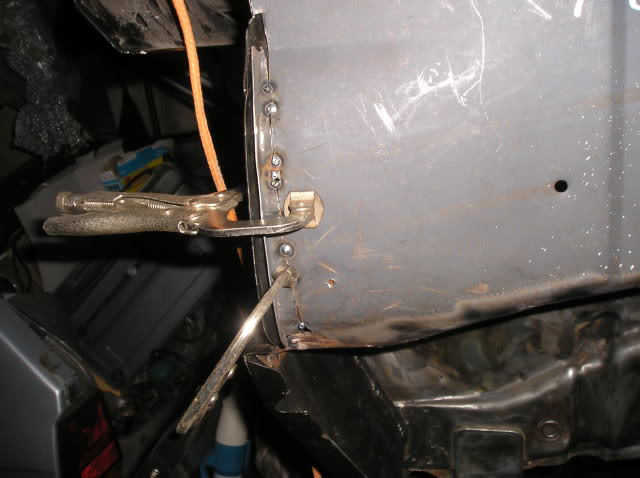 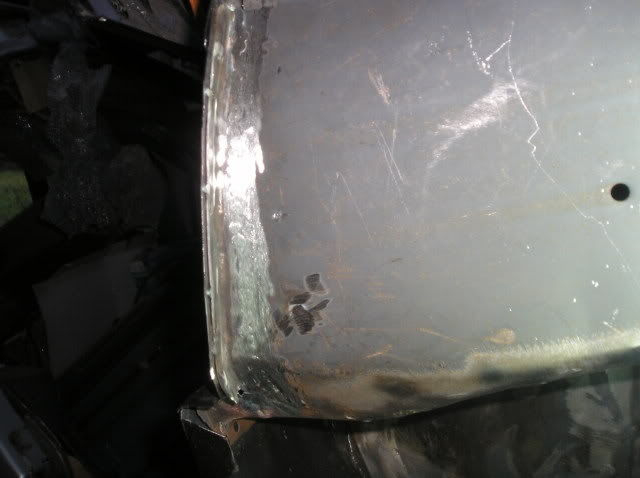 I wonder what these are. Ive been burning some electric welding them up ,still not finished but getting there. 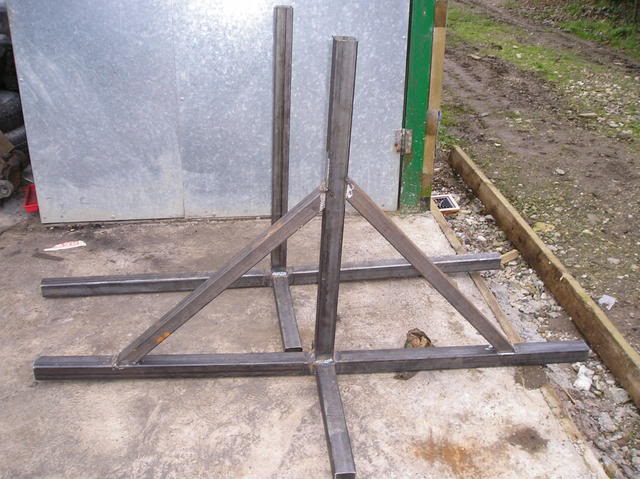 Got the rollover spit mostly finished so here it is.The front castor may be sitting too high so I might need to make some changes.

On The rear there is no way you could lift a mk1 with just the bumper mounts ,the panel moved about 10mm with me just lifting it a little.Much more solid when tied into the suspension mounts.

Need to get the garage cleared before I put the fiesta in and drag the other XR2 out as the shed wont hold the two when this one is on the spit.

THis is the rear and picks up of the shock mounts and bumper mounts. And this is the front and picks the car up by the front crossmember as well as bumper mounts. 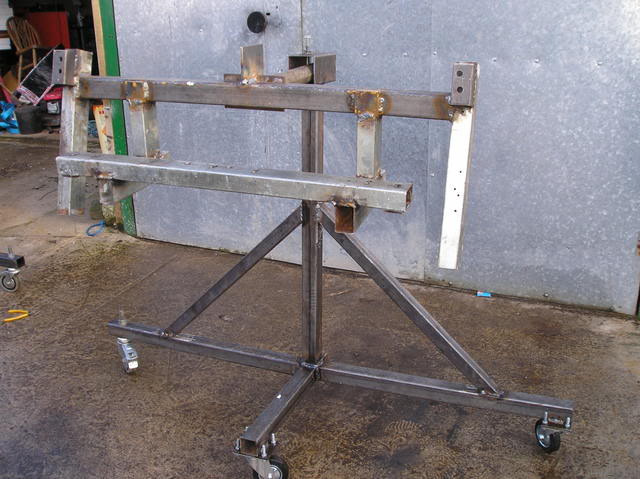 A piece of box will slide into each stand linking the two together .

On the spit but having some problems.Had to take the castors off one side to get it on as its too high for the roof. > It should be ok once the car is on its side but not when its upright. Had to leave it as it is in the pics as ran out of time .Still have to move the other car out to get the door closed.The spit is so high its difficult to get it up onto it too . Have to get the castors remounted lower as I want to be able to wheel it about.Problems ,problems. 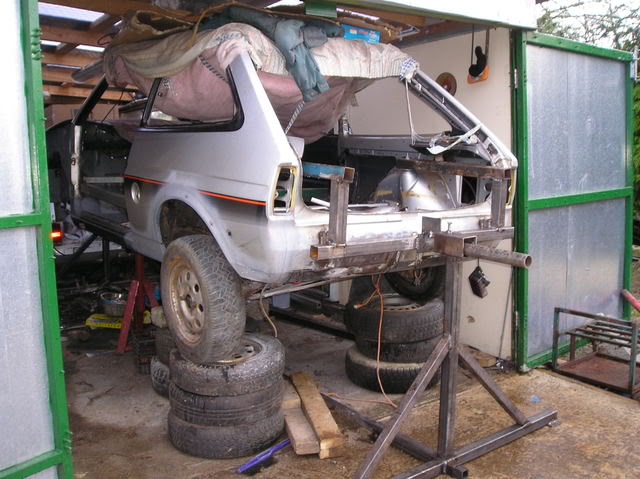 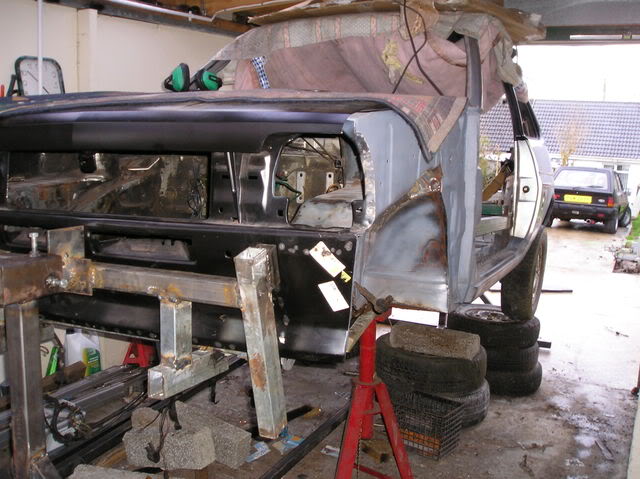