I finished repairing the fiesta center brackets today. They have had the four holes for bolting onto the axle, and the small notch cut out of them for clearance for the caliper (which did'nt need doing), all tigged up and worked back. 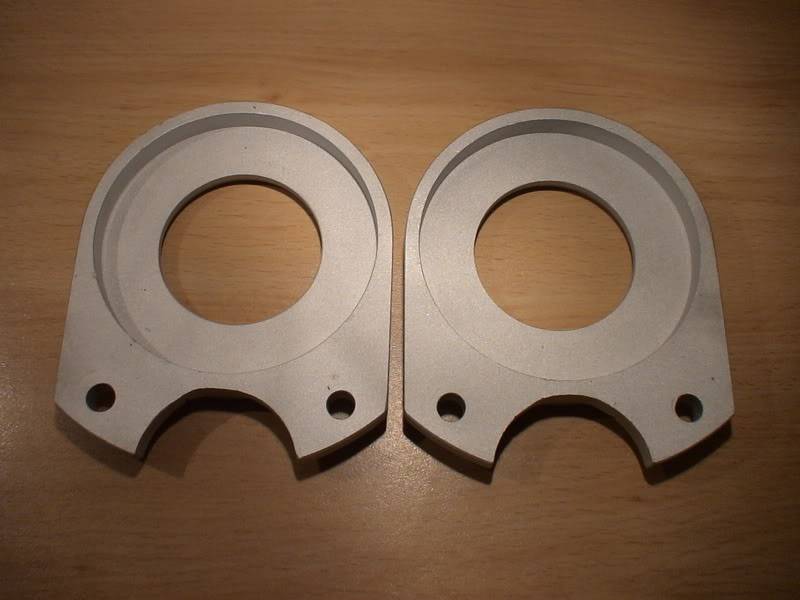 Finished them off with a quick go over in the bead blaster. These are now ready to offer up and get the positions to bolt onto the end of the axle. And will be given a coat of satin black paint to finish.

I collected my uprated high torque starter motor today, that I purchased off Chris XRtwo. It's made by a company called Brise, and can be found on page 237 of the current Demon tweeks catalogue. Listed as direct replacement for the original item, but having a faster cranking speed, less battery current drain and lightweight. Infact this starter which is listed for Ford fwd, cvh, zetec, weighs in at 3kg, the original Ford starter is 3.652kg. So saved a bit more weight just from fitting a different starter. 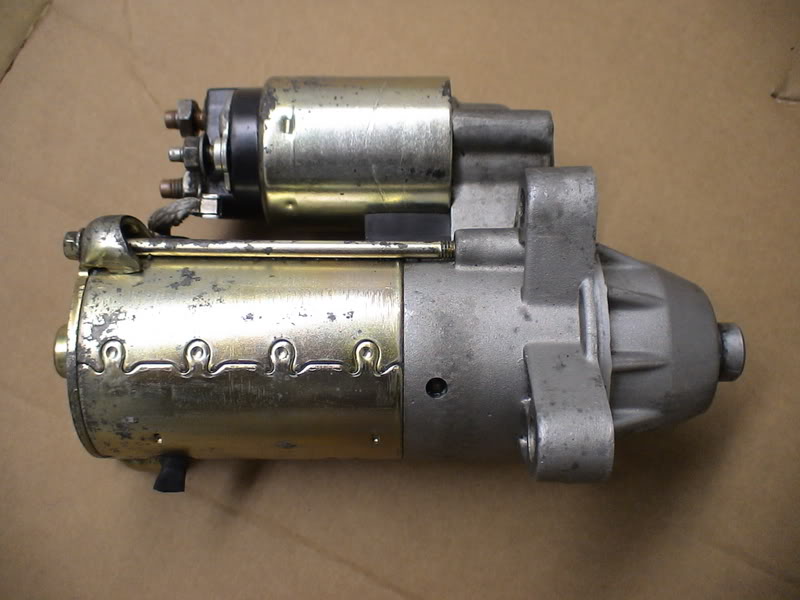 Nothing to update on the car. But a while ago Brian mentioned that there was a picture of my XR2 in the RS owners club rallye news, nov/dec 06 magazine. It was part of the report of the national day. Well this week Brian popped it round for me to scan. 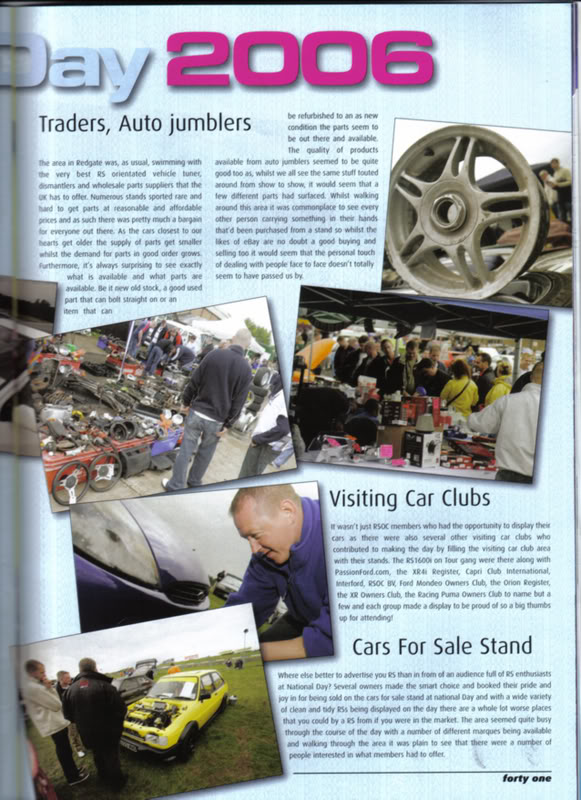 The picture was taken on the Fordsport stand. Quite suprised the RS mag would print a picture of a non-RS. And whats more shocking is thats me standing on the left of the picture.

Waking up the XR2 for show season

Well it's been a while since I've updated my XR2 post. The reason is that I've not really done anything to the car the last few months as it's just sat in the garage. Infact i've not even started it since it went away at the end of sept. But as it's almost april, which is the month I will be taxing it, and will be fully road legal again. I thought I would update on the couple of items i've just purchased for it, and the plans for the next few months.

I've bought a LED rain light for it as fitted to single seater race cars etc. I thought it was a good idea to fit one, though im hopefully not going to be using it in the rain. I am thinking of wiring it up so it flashes on and off as you've seen on the f1 cars. 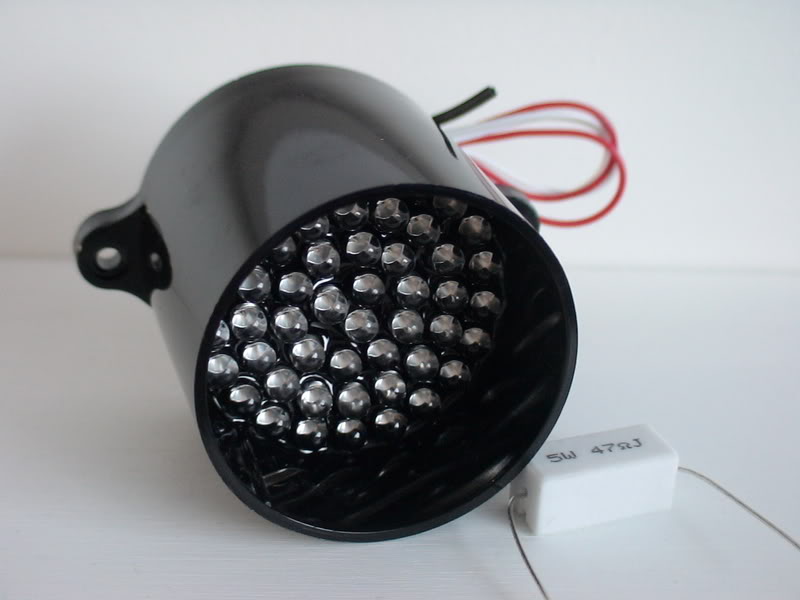 The plan is to fit it to the rear section of the rollcage and will have to probably make up a bracket to fix it on.

I also treated myself to a new Sparco double open face yellow balaclava. 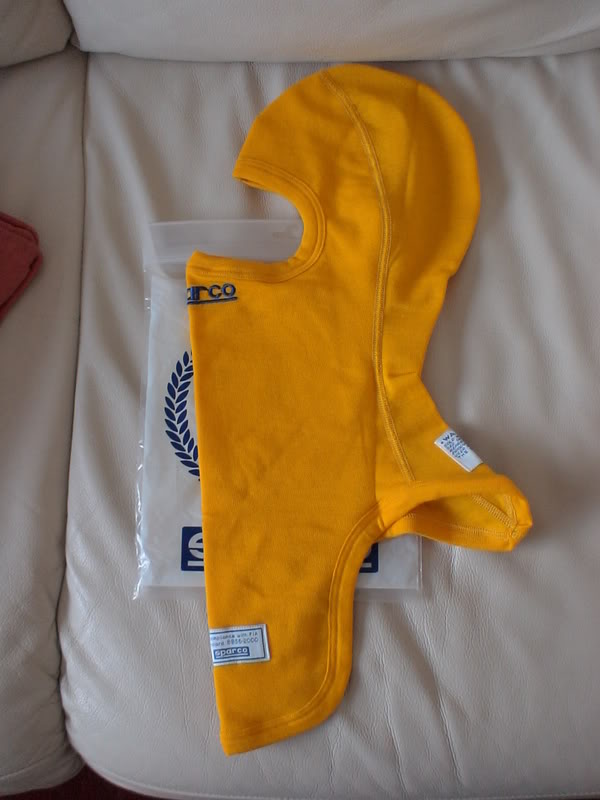 I'm also waiting on another set of alloys to be powder coated semi-gloss black. Im also looking at changing the Racetech electric oil pressure guage for a capillary guage (more accurate). And I need to fit the Rollcenter lap-timer in the car.

The plans for after the 1st of april when it's taxed is to make a appointment to take the car up to Wayne at proalloy to get a fuel cell measured up for the boot area. Got some ideas what I want, but need him to workout what I can get in there, and quote me a price etc.

I had my name down for a track event at RAF Marham in Norfolk organised by phil_h. But as far as im aware this looks like it has been cancelled, and im now waiting to find out if the event has been moved to another day. But i've now put my name down for a track event thru the XRowners club for the spring action day at Castle combe on the april 21st. I've driven Castle combe many times over the years, so it fitting really that the cars first track outing will be at castle combe. Sounds like it will be a good event as the XRowners club are organising a XR only session with possible interest from one of the Ford magazines.

The car is also booked in for a place on the XRtwo.com stand for FITP. And i've got the show listing thru from Fordsport which im working out what shows to take it along to. Hopefully it should be a very good show/track season this year. 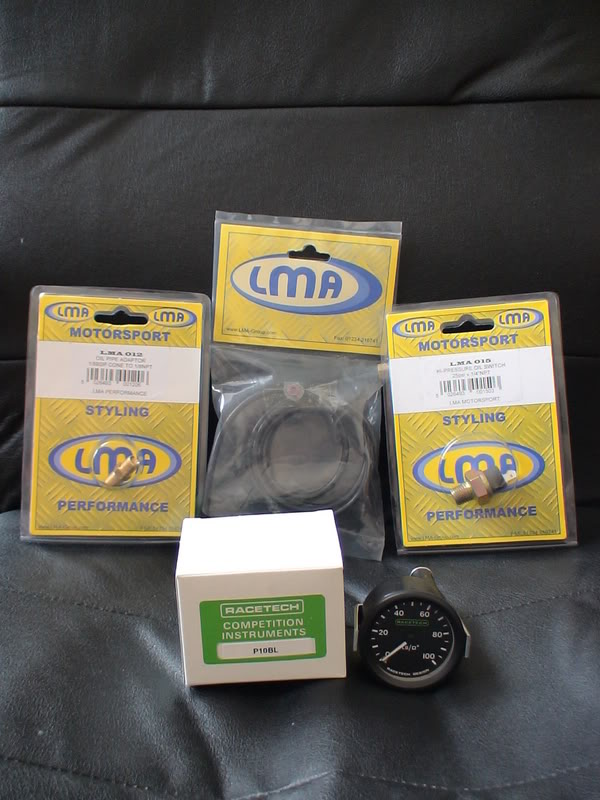 It's still getting money spent on it, in fact I got another item thru for it today. Won another sabelt full harness for the passenger bucket seat. Not exactly the same as the drivers one, as this is a couple of years old. But it's in excellent condition. Still 3" webbing, with the aircraft style quick release buckle. That should stop the passenger falling out! Im currently half way through changing the oil pressure gauge over. I've had to take the dash apart to do it which is a pain. Hopefully this will be finished tomorrow.

As it's getting close to the start of the show/track season, I'm having a push to get a few jobs done on the car. Today was my last day off work, so thought I would have a good go today.

I finished of fitting the Raceteck oil capillary gauge into the original clock assembly housing. Started the engine up to check if I had any leaks. Had a small one on the T-piece, which just needed a tweak. Now dry as a bone.

I also fitted the RS200 bucket seat back in as the passenger seat, and fitted the Sabelt harness I got the other day. 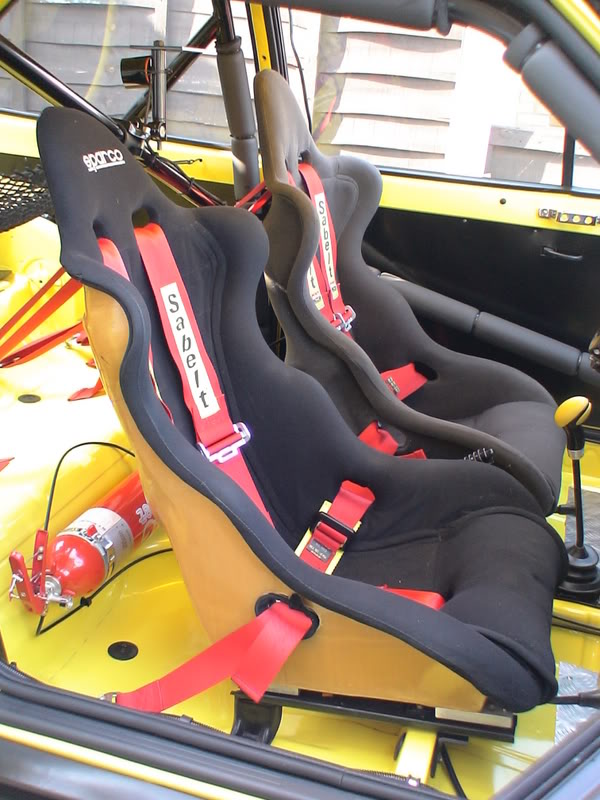 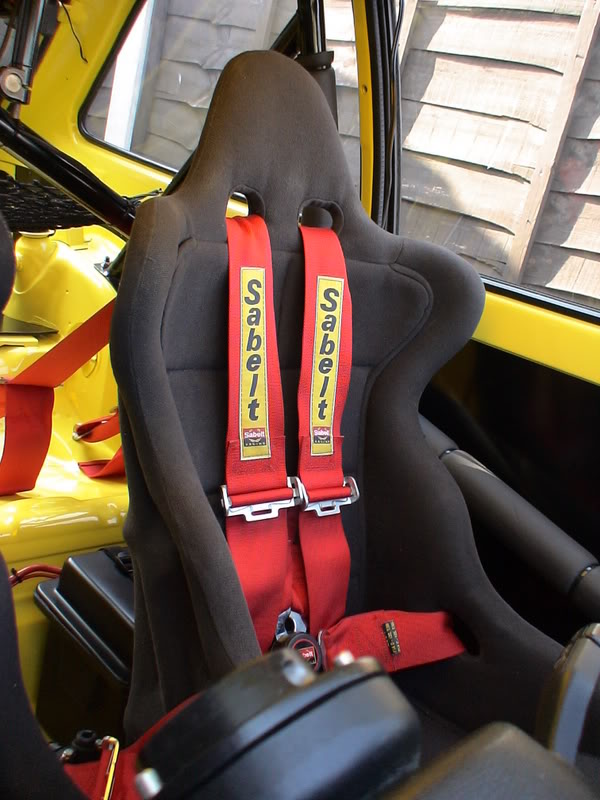 Fitted the Rollcenter lap timer into position. Held in place with velcro strips, so easy to remove to plug on the computer to download the information. Sensor runs around the front of the rollcage, and at the moment is pointing out of the passenger side, as that's were most of the time the beacon will be. 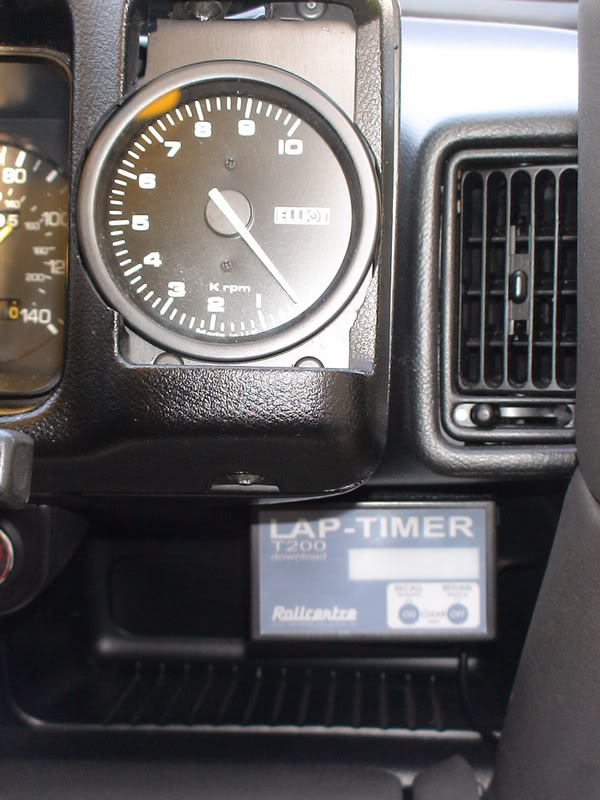 Fitted it down infront of the fuse box cover as that was really the only space available were I can still see it, but not to distracting. I dont want it to much in view as I want to be looking were im going, not how fast a lap time im doing.

I also fitted the led rain light to the camera mount, which is fitted to the rear diagonal off the rear cage. All wired up and works off a switch on the dash. I really want to have it so it flashes, as seen on the back of the F1 cars. I guess I will need to wire in maybe a indicator relay to make it flash on/off. Pictures to follow.

Last weekend the car was used for the 1st time for what I built it for. I had booked it in for a full weekend of track action thru Phil-H (thanks mate) at RAF Marham. Was a really good weekend. It was organised and run very well. Circuit layout was good, which consisted of a 3 mile track with a 1 mile straight! The range of cars there on both days was very varied. Anything from hot hatches to high powered jap's, to top of the range lambos and ferrari's. The picture above is when I first arrived at the event. I've got my latest set of 15" alloys that I only picked up on the previous thursday from being refurbed. These have got a set of road tyres on so I can keep the other set with the Avons ACB10's just for the track.

One thing we were told in the briefing before we went out was to beware of stones. The runway itself is swept clean, but the circuit is made up using some of the taxiways and these do collect stones. I noticed most cars were protecting the front's as best as they could. And after a couple of goes out on the track I noticed that I had collected a few chips to the leading edge of the bonnet. Now I know I should expect this being a track car, but I thought I may as well somehow stop it as best as I could. So out came the roll of gaffer tape. 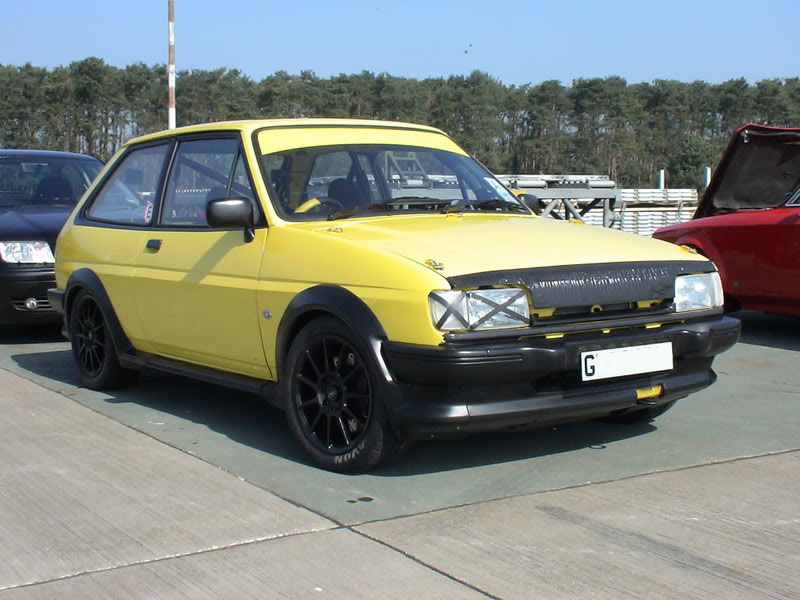 I'm glad to report the car run very well considering it was it's first track event, and had only covered 1,000 miles since being built. I did have a breakdown that stopped play saturday afternoon when the main battery terminal to the starter snapped in half. And this was one spare that I did'nt have with me. Luckly Phil told me were the local motor factors was in the nearest town. So my mate kev who took his Bora as the support vehicle (thanks mate) towed me there, and I got it patched up so I could go back sunday for more fun. The picture above is my mate kev having a blast in the car, he seemed to like it.

One problem I was suffering from if the fuel level in the tank was too low was fuel surge/pickup. If the fuel level was left to get to around a 1/3 from empty, I was finding that the long sweeping left hander back onto the main 1 mile straight it would'nt rev over about 4,000rpm for about 1/3 of the straight. Then suddenly it would pick back up, and be fine until you exited the same bend again. If the fuel level was kept above a half a tank it was ok. Now this could be down to a couple of items. I need to get made the baffled fuel cell i've been after for awhile. I was also warned by Tommy at FMS that the facet silvertop comp pump im currently running may struggle at higher revs, and the redtop pump would be a better option. I did find the engine would'nt rev as high as as it should, which again could be down to not getting the required fuel. I do have the redtop pump, and will fit that this week so I can try that out first. But im planning on giving proalloy a call next week to have a chat about getting one of there tanks made.

But apart from the fuel, the engine run really well. I drove just over 500miles in total this weekend. Oil pressures were spot on as well as coolant temps which was nice and low, even after a session out on the track. No water or oil loss. Brakes were excellent which pleased me, as the escort mk4/turbo servo/master cylinder I put together was well worth doing. We did have a play around with tyre pressures and now have got this about right. So overall the first propper outing for the car was a success. Oh, and the sound it produces is awsome. I had a digi video camera setup inside the car. When I get time to upload it onto the computer I will edit it into a video.

I'm now getting it ready for this saturday as im taking it to Castle combe for three sessions out on the track. One which is the XR only session with the XR owners club. Today I fitted the edge reduction starter motor to replace the standard cvh item. I found the cvh struggled a bit to turn over. But this edge one seems allot better and spins then engine over allot quicker. It is also a fair bit smaller in diameter and also 680 grammes lighter. 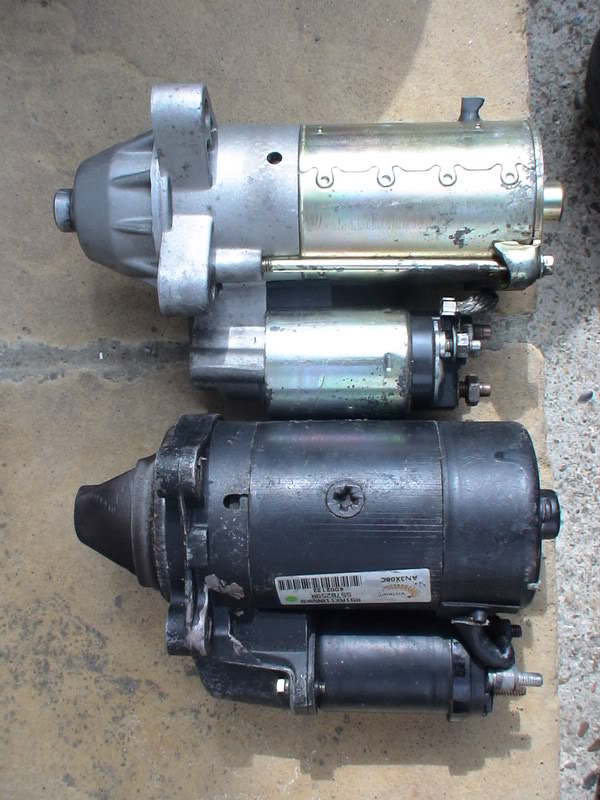 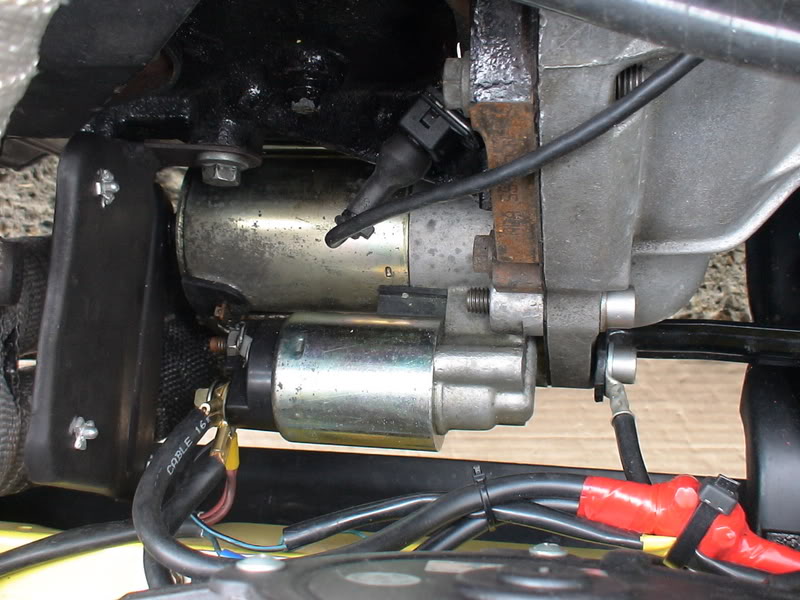