I finished drilling the securing position's into the car for the rad this afternoon. Went really well, with only one area of the front panel needing a bit of a trim. Infact it's gone in exactly how I wanted it to look, so im well chuffed.

Had to remove the original spal wiring connector, and solder onto the wire's a genuine Ford cvh switch connector. I have now hopefully worked out exactly what silicone hose's I require. I will be placing a order tomorrow for the required elbow's, and straight length's. 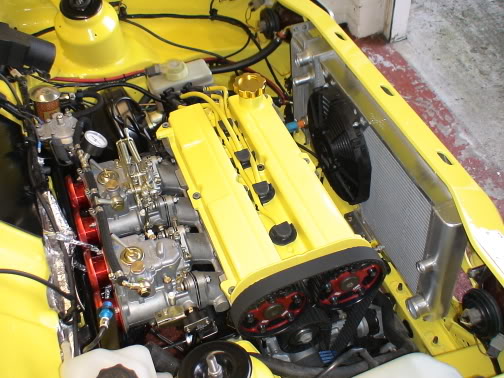 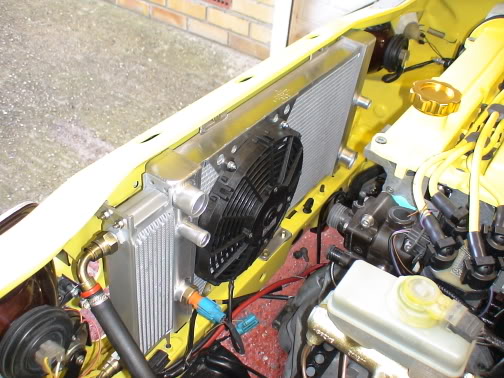 I think it look's really good from the front with the oil cooler along side it. 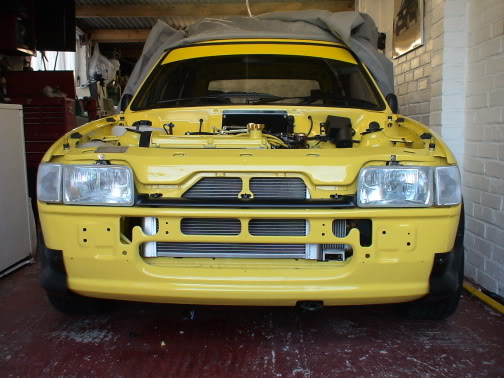 Also yesterday I finished wrapping the exhaust manifold in Thermotec heat wrap. I used 1 1/2 rolls of the 1" wide material. This already come's in the black colour, and was secured in place with stainless tie's. 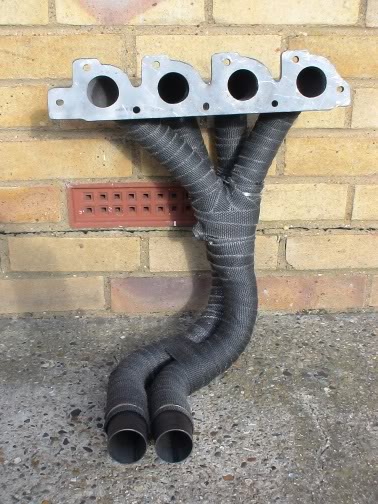 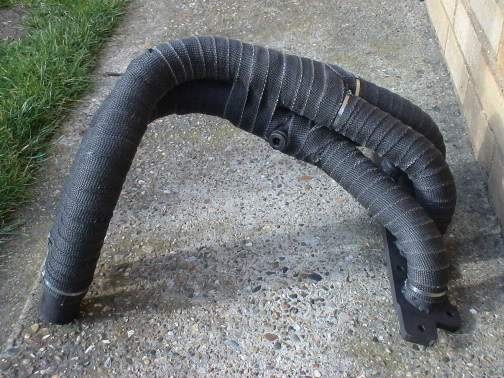 You can clearly see in the last picture the Lamba boss with the blanking plug fitted. The exahust manifold has now been bolted in position, and the magnex system bolted up to the manifold flange. So the exhaust system is now fully finished. Picture's of the manifold fitted will follow tomorrow.

I also sprayed the fuel filler cap in Halford's pumper paint to match the kit. I forgot to do it at the same time as doing the kit. 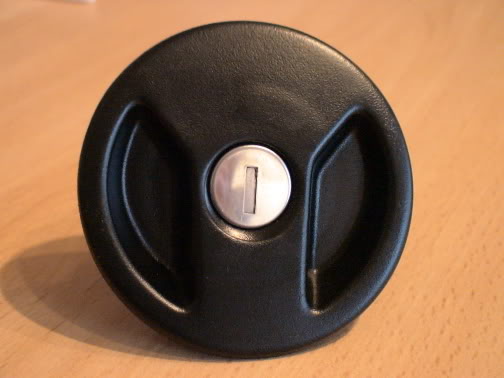 Will update again tomorrow when the starter, and rad will be bolted back in the car. Then wiring for the started and alternator all secured back into position.

Today I fitting the smaller starter back onto the gearbox, and then bolted the rad into position.

Exhaust manifold in position with the starter fitted and wiring all connected up: 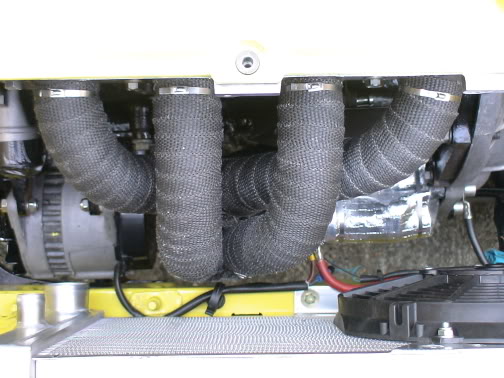 Three other general shots of the engine bay showing the exhaust manifold and rad in position: 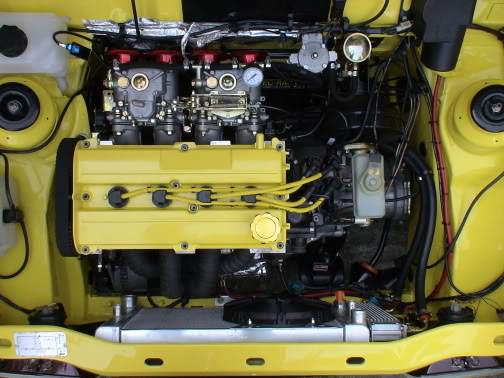 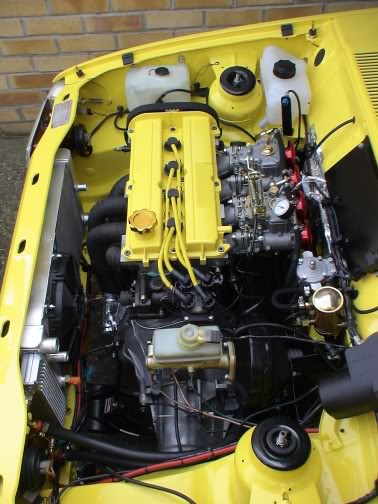 Overall I'm well pleased how these two main items have gone in the engine bay.

I re-checked the list of 90 degree bend's and straight lengths of silicone hose's that I require, and phoned through my order this morning. Most of them will have to be made up, but i've been told they make up the order's on wed's. So hopefully I wont have to wait to long for them.

I had made some of my hose joiner's up at work, as I sometime's come across length's of alloy bar. But I didn't have any large enough to make the biggest hose joiner, and I also needed a couple more of the smaller size as well.So I placed a order with Rally design for a three of there joiner's. The top three in the picture are the rally design item's, and the lower two are the one's I made. These two need cutting to the required length when I fit the hose's. 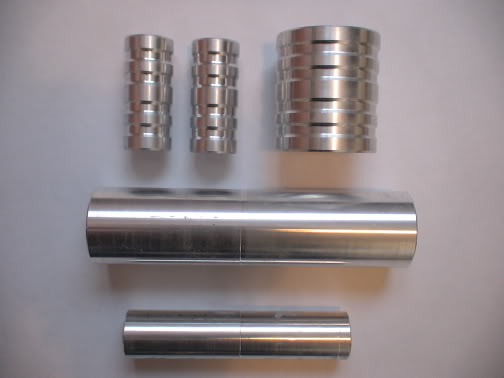 I phoned Field motorsport this morning to see if I could catch Tommy. Had a quick chat, and popped over to see him about eventually getting the car booked in.

Cool fella, certainly new what he was talking about. And also the three car's outside waiting for him to work on backed this up (racing Escort cosworth, Road Escort cosworth and a white 3 door cosworth). Explained what im after and he's said it wont be a problem, and has told me as soon as i've got the coolant hose's finished to give him a call to discuss price's and when to book it in.

I thought I would post up a couple more picture's of item's that will be going on the car once it's finished. 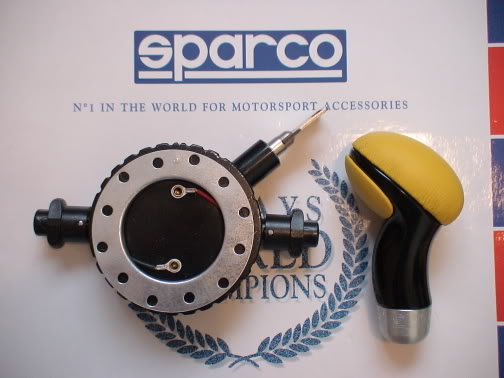 Yesterday I picked the latest batch of powder coating up from JP polishing. Had it all done in the same semi-gloss black as I had my wheel's done.

the item's in the picture from the left are; 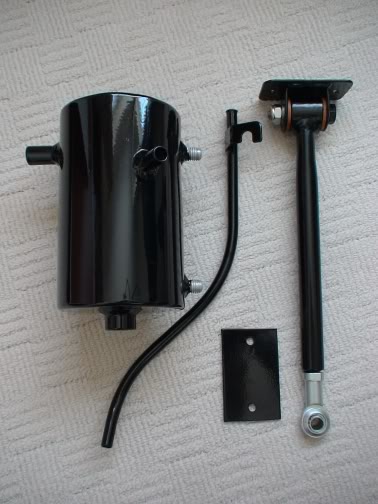 The engine brace is another item i've made myself. It's made from one end of a XR2 panhard bar, fitted with a Deflex bush. The other end has a length of 10mm studding welded in, and a 10mm rose joint screwed on. The rose joint fix's to a bolt on the top of the gearbox which screw's into the engine, and the bracket bolt's to the bulkhead with another plate for strength inside the car.

Hopefully friday morning I will get time to fit this in place before I go to work. I will post up another picture once it fitted.

Still waiting on hose's. Hopefully wont be long now as I was told they would be made for the end of this week.

Bolted the brace in place this morning. Has gone mostly to plan were I wanted it. Was hard to get a picture of the full brace as there alot of bit's in the way, but here's the best I could do. 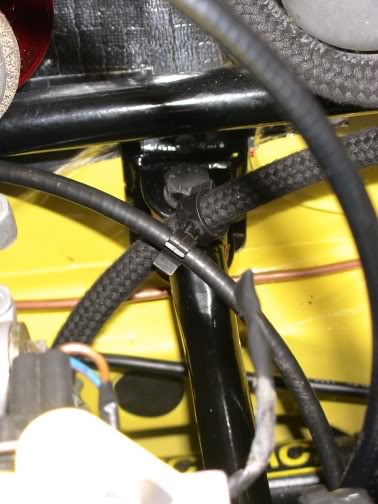 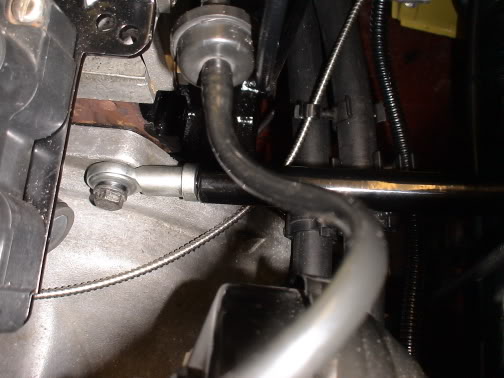 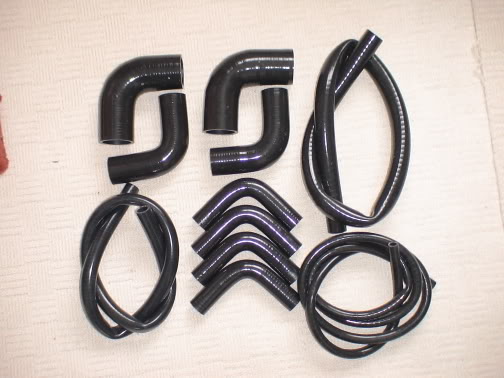 I've also started to fit the oil catch tank in position. Drilled the securing hole's, and will bolt in position again tomorrow and connect the silicon hose to suit.

Hopefully tomorrow I will get this all finished. I can then have a chat with Field motorsport next week about getting it booked in.

I finished fitting the hoses this afternoon. Fitted the last few stainless hose clip's and filled it up with 50/50 motorcraft antifreeze mixture. Also the oil catch tank is in. Fitted with the drain plug in the bottom, and the pipercross breather on top.

Will leave it over night and re-check it tomorrow after work for leak's etc. I also need to get a 30mm stainless p-clip to secure the hose from the header to the inner wing for support. If ok, I will give Field motorsport a ring wed morning about getting it booked in.

There's me all getting excited today about taking the car in to Field motorsport tomorrow. So I phone to make sure they are still expecting me along tomorrow, only to be told that they now can't take it in due to a RS500 Cosworth which is in the workshop has had a wrong part delivered, and has put them behind by a whole week. They need to fabricate a part up for it, which is why mine has been put back.

Now it wont be going in to the following weekend (15th), and wont be worked on till the 18th due to it being easter weekend.

It look's more than likely that it wont be going to the Fiesta thrash in May, as it only leaves me a couple of week's to get it finished.

On a good note. My black Sparco carbon/kevlar bucket seat arrived this morning. Another Ebay purchase which I got for a good price. Second hand with a few minor mark's were the harness goes thru the hole's etc, but well pleased with it as it weigh's bugger all. Not sure yet if to use this one as the driver's seat or the passenger one at the moment. Over the weekend im hopeing to get a fiesta runner bolted to it, and will try it in the car.