Spent another hour trying to sort out the gearbox/linkage, tried like 20 different positions and no luck, so going to have to contact the guy who i bought it off and see if he'll swap it for another one or maybe do me a deal on another S1 or S2 RST box, bit pissed off about it tbh. Also the engines smoking alot, like just revving to 3k which is another dissapointent. Done the tracking today with help from a mate and a piece of string, whilst the car was in the air thought may aswell fit the new Brembo Discs and Ferrodo pads so they're done with: 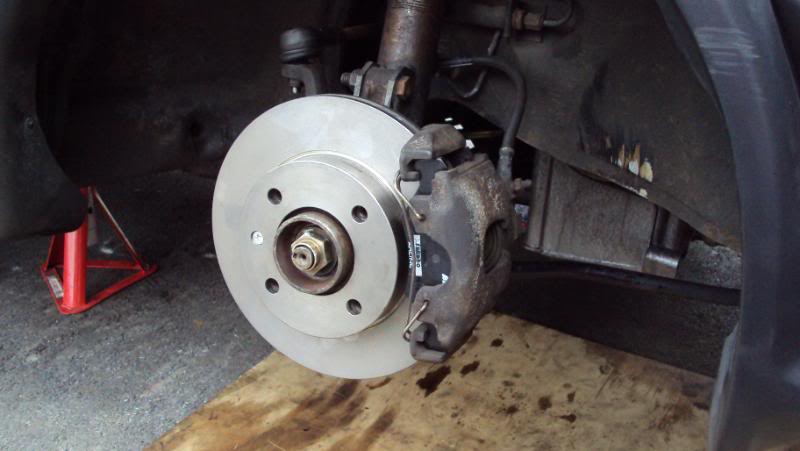 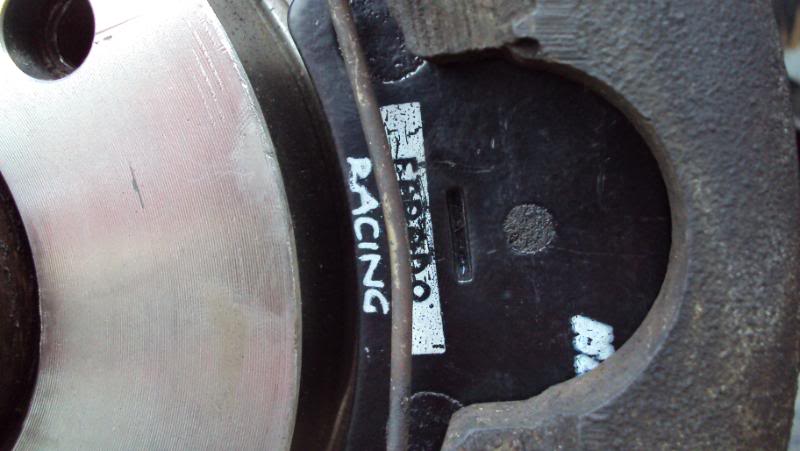 Not drove the car today to bed them in will tommorow though, quick pic of where i've mounted the Omex 200 too, you can see the 25mm hole I drilled, then fitted a grommet into to feed the wires into the bay at the right height etc: 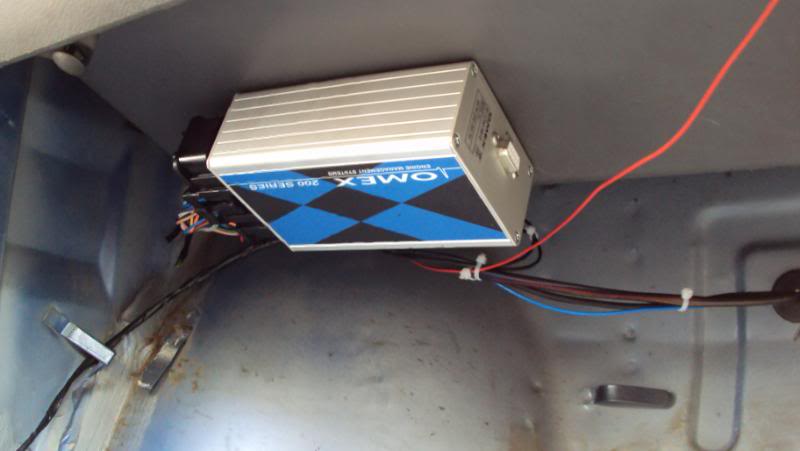 I bedded in the brakes yesterday, they're awesome, think the system needs bleeding tho so going to do that once ive done the rear beam as you need to disconnect the rear brake lines to get the beam off. It drives alot better now with the tracking sorted, will double check it again once the beams done tho. It's been mapped this morning got back about an hour ago, was running really rich when it went in and was suffering was bore wash slightly, so thats maybe kicked off the problem with the rings and maybe thats why it smokes so much, it isnt as bad as what it was but still pretty bad, will see how it is as ive only put like 100miles on it so far. It made 158bhp @ 7k, pretty happy, at the moment that's what the limiter is set at as I need ARP big end bolts as these cams are meant to make power upto 7.5k... so should break the 160 mark once I fit them, not worth fitting them yet if this engine is knackered tho, will just have to see. No torque figure tho as Mikes computer froze so he said he'll ring me back with the figure once its sorted as it still should be saved on his hard-drive, feels way torquier than the zs tho so should be high 120s... wheel spin in 3rd is fun! Also the car now goes into reverse too with abit of a struggle and grind. Just going to see how I go with 7k limiter, dont think the engines gonna last that long though , it's smoking terribly!

Just arrived home on the back of a AA van, carbs have jammed whilst driving 'enthusiastically' lol, just went straight to the limiter... going to give Mike at Mikeanics a ring in the morning seeing what he suggest as its something to do with the carbs themselves, the 'sliders' that move up and down are all free and the butterflys arnt sticking so must be something to do with the carbs them selves like a major air leak, will see what mike says in the morning, sigh! 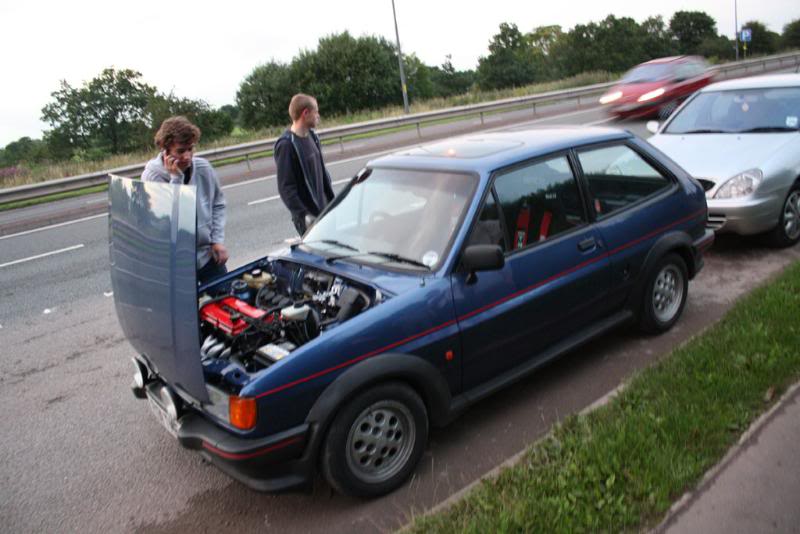 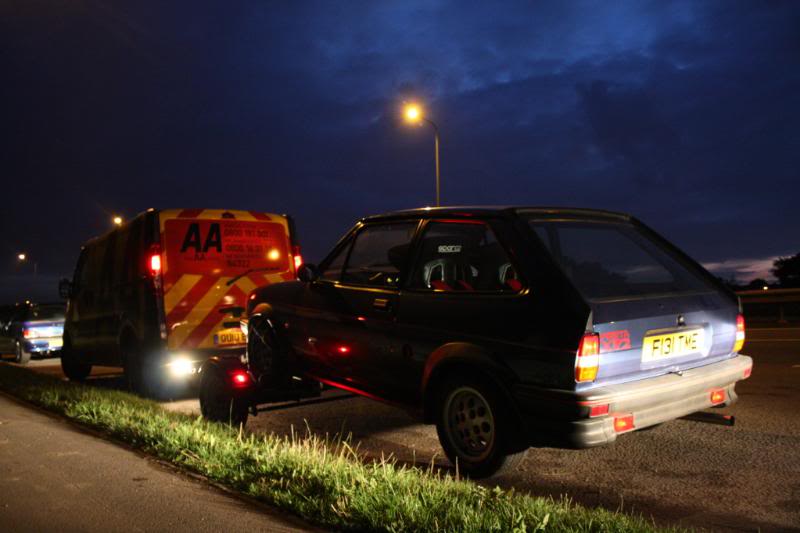 All sorted, problem was this screw had popped out so there wasnt enough slack on the return spring, which was causing the butterflys to be around 1/4 open: 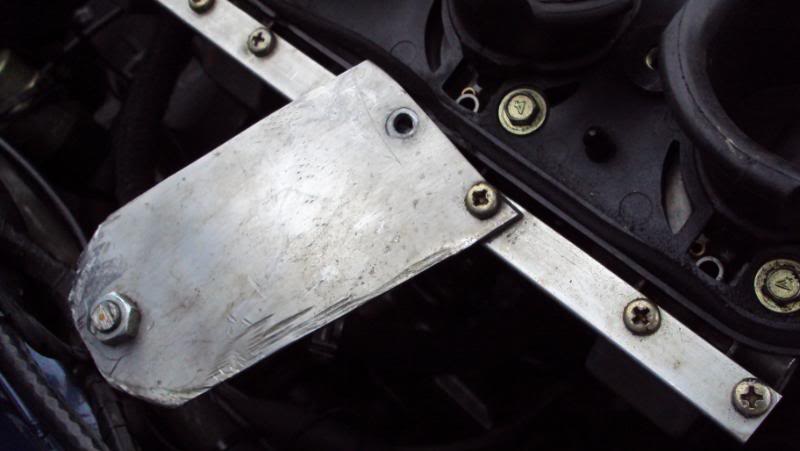 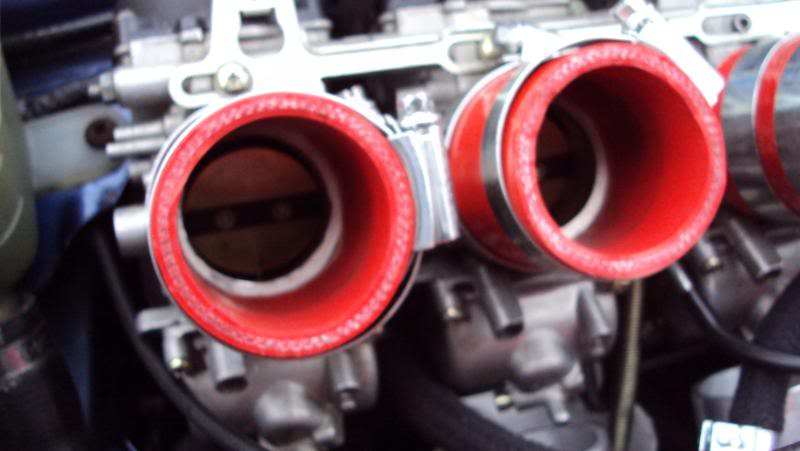 Just found a screw to suit, fitted the carbs back on started the car, sweet as a nut, was expecting the worst tbh but glad it was only minor. Also try and ignore the smoke and listen to the sweetness of induction lol, quick vid from last night:

Thought id get cracking with the rear beam as a mates offered top help re-fit the new one tommorow, after over 2hrs of strruggle with stupidly tight bolts, and brake lines rounding off, the beams off. Progress pic: 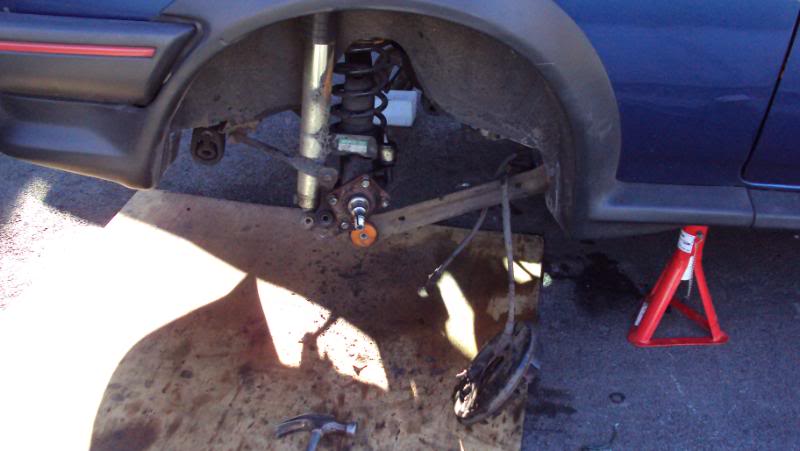 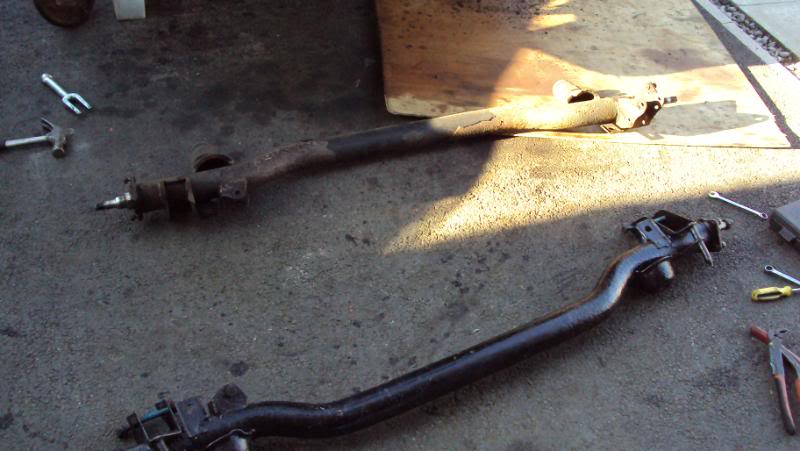 New one has already been painted with some hammerite, ready to re-fit tommorow: 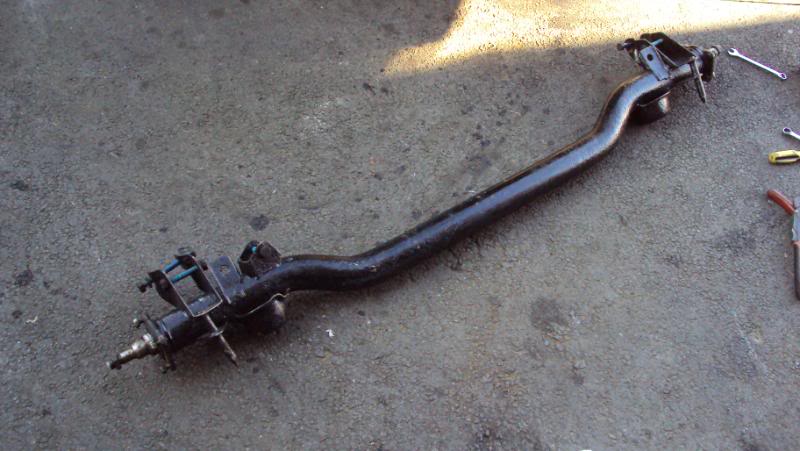 Just need to get a rear brake line made up now as its snapped, then all can be put back together, should all be done by dinner time tommorow

Went to get a brake line made up whch I needed this morning, then when I got back a mate came round to give me a lift up with the beam and to help bleed the brakes etc. Now now more positive camber: 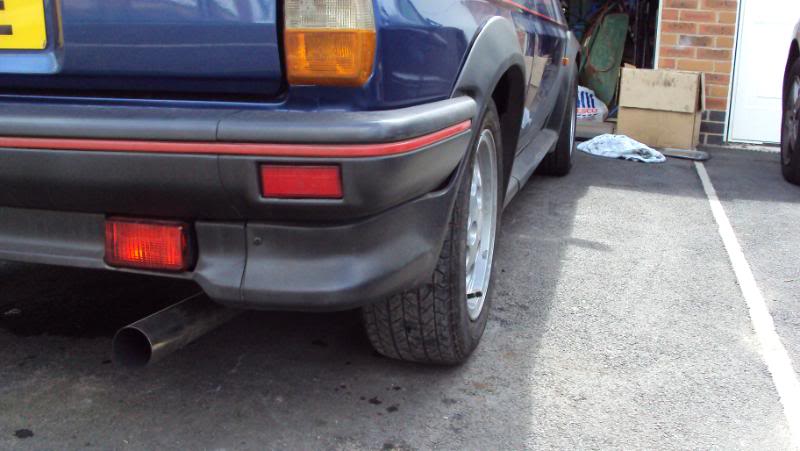 The rear wheel was ridiculous how bent it was, so swapped both offside wheels over the the 2 silver ones i got a few weeks ago, I will be getting the tyres fitted tommorow.

Just had the Toyo Proxes CF-1s fitted, they're awesome even just after 5 miles bedding them in you can really tell the difference over the Champiro Gts. Also the car isnt smoking as much now, still is but not as much,the pressure is high too as idles at 100degress is 3bar and it should be around 1.5-2, a mate recons the pressure relief valve in the oil pump could be blocked as its known to have happened before, so early next week its looking like ill be popping upto his to whip the sump off and see how it is as the high pressure could be a cause of the smoking too. I've just been to get some new oil & a filter also some gearbox oil ready for when we swap gearboxes. I washed the car earlier, first time in about 5 weeks: 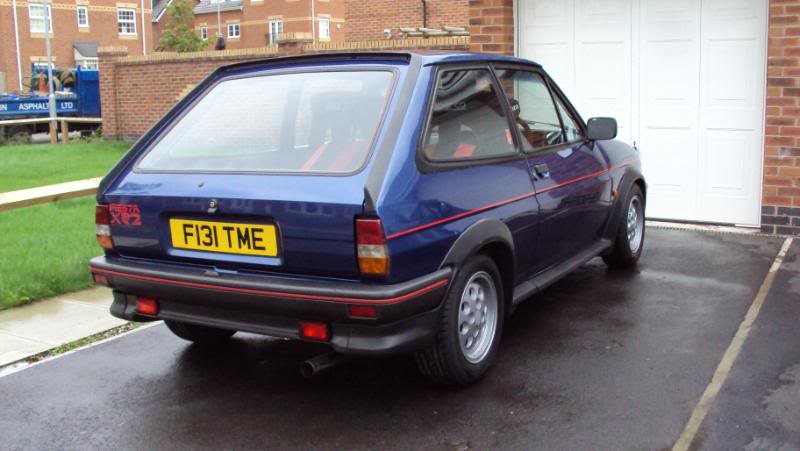 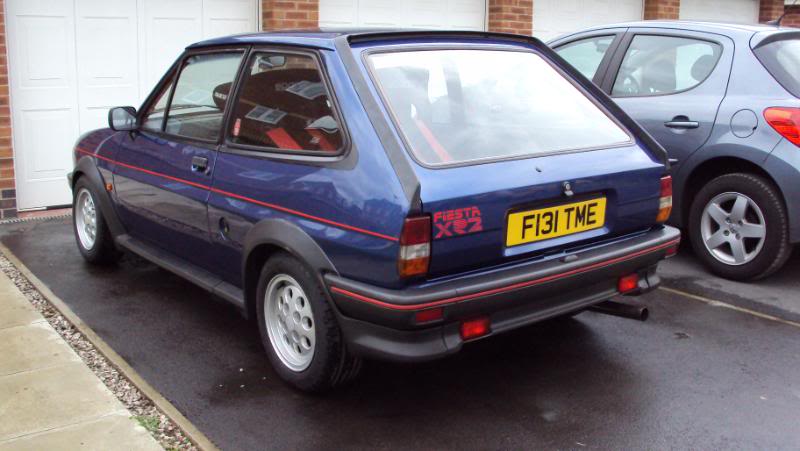 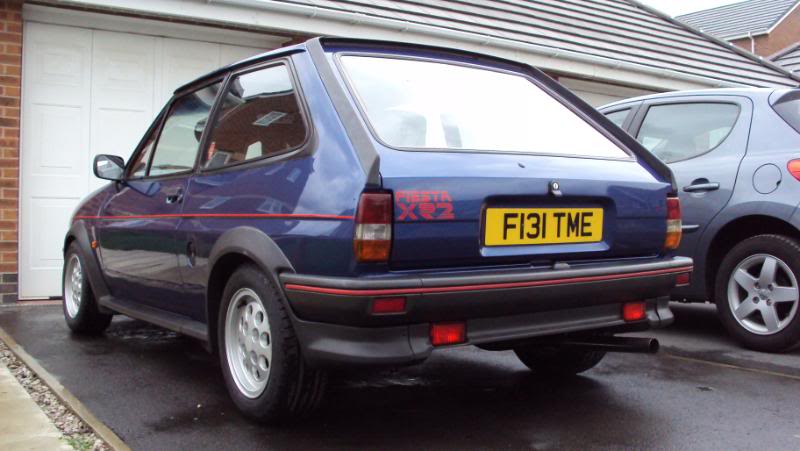 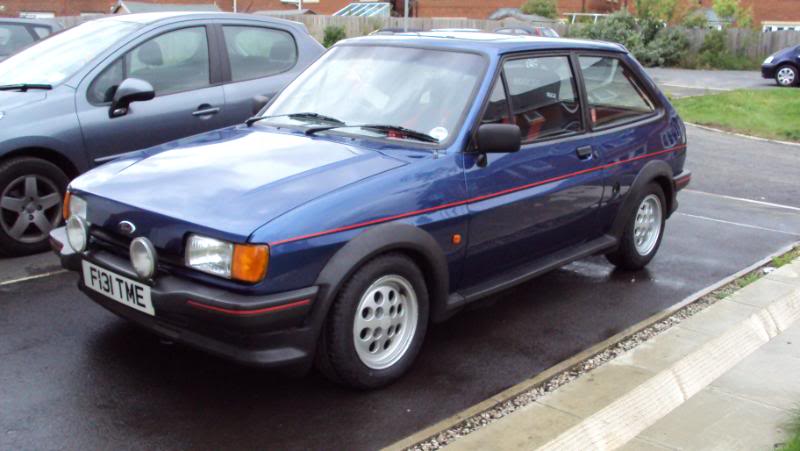 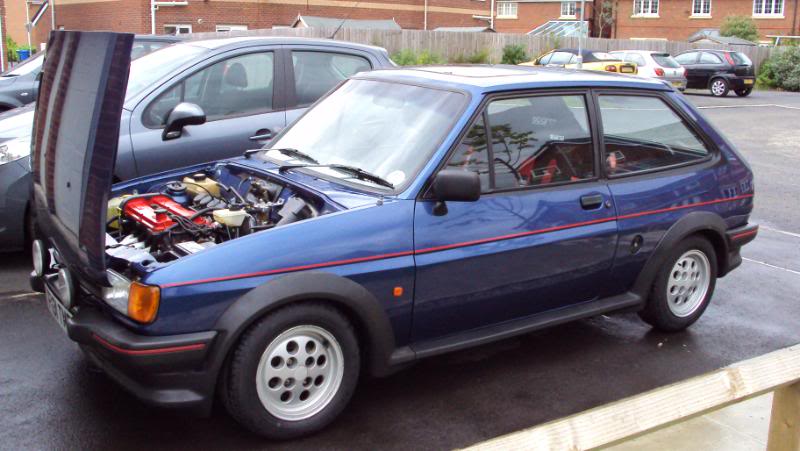 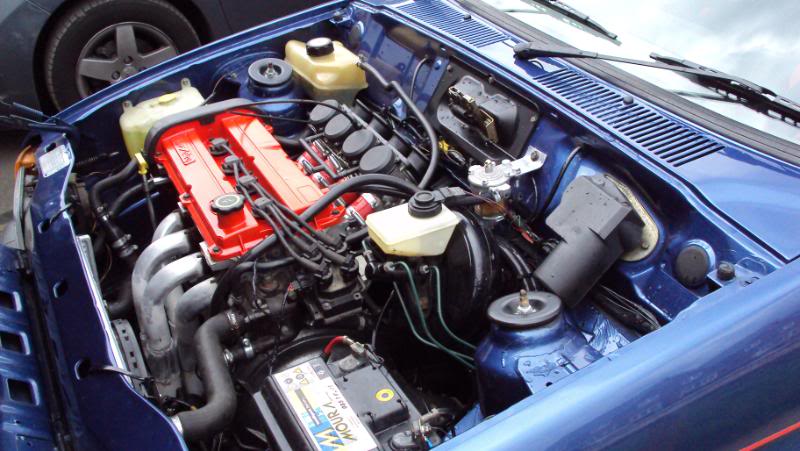 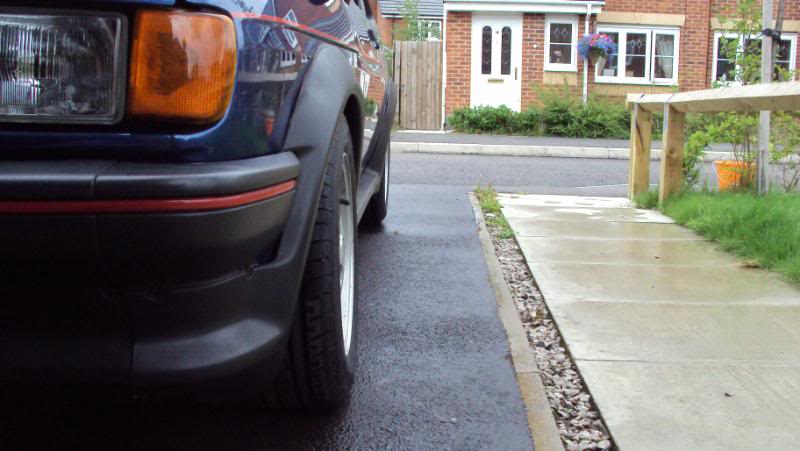 I then decided to paint the rear of the car in Satin black, will do the front next week probably, just looks alot tidier as it is.

The exhaust fell off

I went to a mates last night to give him a hand with his car, on the way there my exhaust fell off, where the 2-1 part joins the 4-2 on the manifold, it just slid off even though I hammered it on originally and used lots of silicone sealant, so my mate brought his jack and axel stand out and I fitted it back on just as tight as i could get the brackets on, just checked it and its slid back off another 5mm too (FFS), so again just undone it and tightened the clamps up as much as possible, going to ask andy very nicely will he weld it together on monday for me as it needs to come off to get the sump off to check the oil pump, if he'll do that for me then theres no chance of it slipping off again then, good old ashley!

Another problem, I started the car earlier to go out, then the revs just dropped faster than usual and cut out after about 20 seconds, tried to start it again and the fuel pumps not priming and there's no fuel in the filter king, there usually is after one prime of the pump, all fuses are fine and the relays clicking but just no fuel in the filter king, so must be the pump, this pump has always played up, so going to have to do some ringing around in the morning and try and get one sorted for tomorrow ready for the meet in the evening.

Update, just got a new fuel pump, tested it before I bought it, it works great, fitted it to the car, wired it up correctly and still nothing, checked all the wiring where I soldered and they're all absolutely fine, relays still clicking, if the relays clicking that means its working yeh? Really don't know what to do now!

Edit: sorted thanks to a mates wiring advice, I was kinda thinking of that before about the positive for the pump and the positive going to the battery need to be opposite each other on the relay, should've thought of that last night, not sure how its worked absolutely fine all this time now tho?

Had to pull over quite alot last night whilst on the way to the meet, driving to and from places at the meet, problems were the relay for the fuel pump again, jubilee clips slipping off the carbs, screw fell out again off the retaining spring for the throttle linkage and the glass for the spot lamp nearly fell out, so I've been and bought a new relay for the fuel pump as mine was being dodgy hopefully thats sorted that problem out now. I siliconed the spot lamp glass back on and took the carbs off fitted another screw for the retaining spring usng some locktite, then lined all the silicone hoses back up and made sure they're all as tight as i can get them.

Just a couple of pics from the meet yesterday: 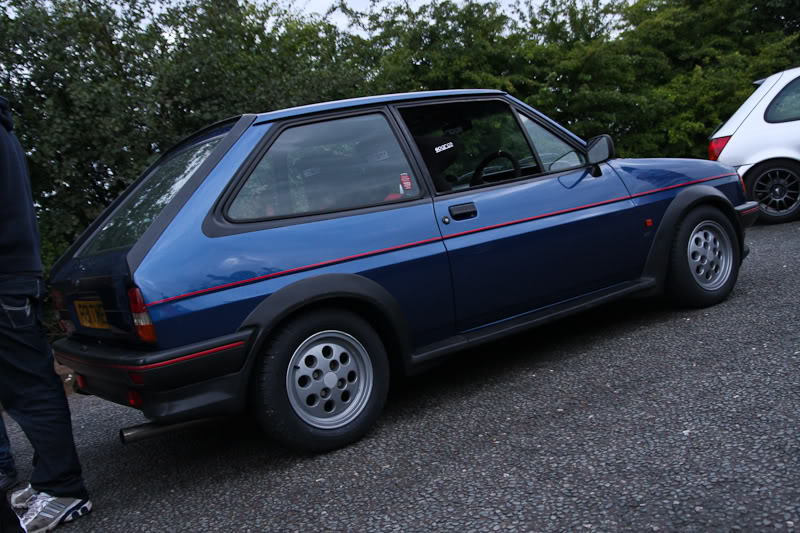 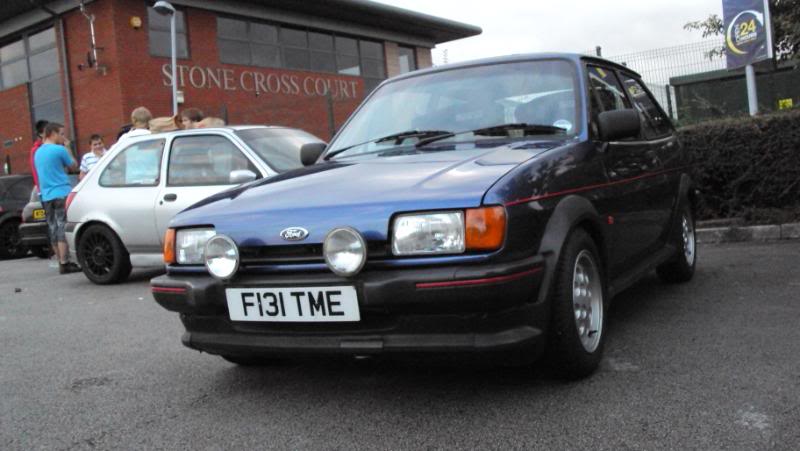 Took the exhaust manifold, starter motor and sump off this morning whilst my mate was on his way. When he got here he checked all the oil ways and oil pump with his snap-on super duper camera and all looked very well he said, so really dont know whats causing the high oil pressure, Andy said it could be due to its a 115ps spec 1800, as 130ps spec ones have oil spray jets that open at 1.9bar which would lower the pressure and keep the engine cooler, so maybe the pressure is fine for this type of Zetec E. I just put the sump, starter and manifold back on, re-sealed the exhaust and screwed a self tapper into one of the secondries to hold it so should have no more sliding off issues now, new oil and filter change too obviously. Now I'm just going to keep running it till the rings get worse as it seems 99% certain that it's just the rings, as it only smokes like above 4k on full throttle, just have to keep on top of the oil see how long they last.

I also sanded the II16v Zetec and ford logos off the rocker cover so they stand out and renewed the Earth for the pressure sender as it was blipping up and down with it just taped to the sender body.