It's been awhile since my last update, so I thought I should post up the lastest modifications and news. The car hasn't been out of the garage much the last few weeks. But that hasn't stopped me from doing a few job's on it.

I made up a pair of extensions to carry the aluminium sheeting into the boot area of the rear quarter's. Made out of 1mm thick alloy sheet and been powder coated semi-gloss black the same as the rest. 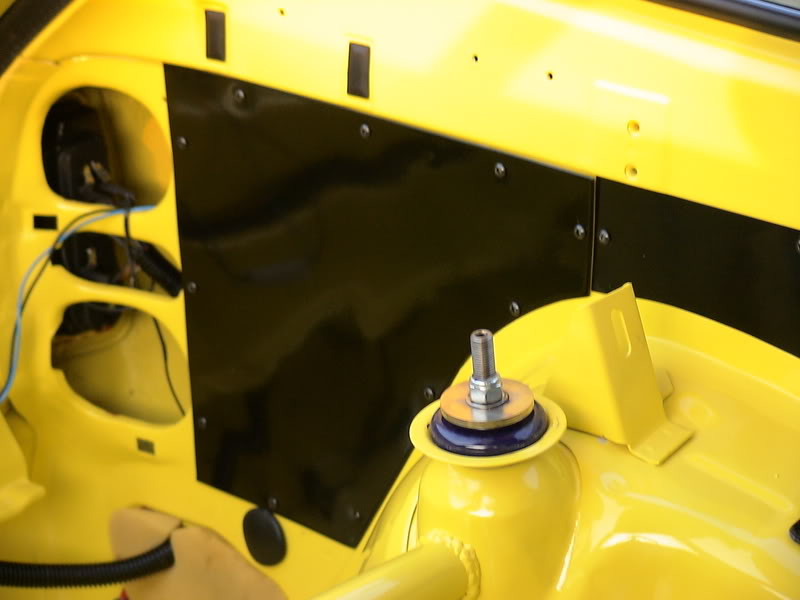 Just finished of the inside. I also fitted a tailgate release servo motor, as in the future im going to need easy excess to the boot. Now that the car has two seat's fitted, and with the full cage I can't get into the back of the car to release the locking latch (I'm not as young as I used to be). So I made a alloy plate up to fix the motor to, and this is all secured in position inside the tailgate. 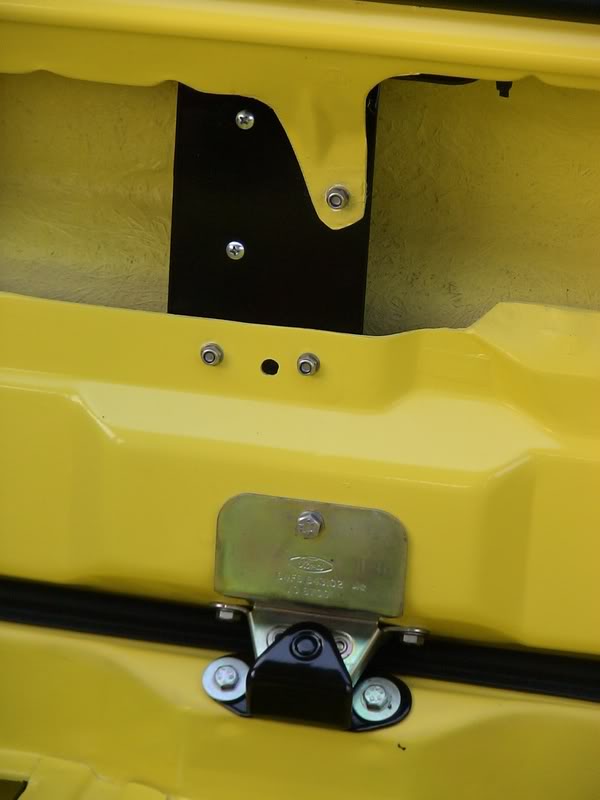 The motor is connected to a switch on the dash which pop's open the bottom catch, and then all I need to do is release the two pin's from the outside at the top and lift the tailgate off.

One item of the car i've not been happy with is the bonnet skin. It flaps around in the middle by the scuttle panel like a main sale on a around the world yacht when you get to about 60mph!!!. Does'nt give you any confidence, as i've been were worried it was going to fly off. So i've fixed the problem by fitting a extra bonnet pin in the middle of this area. I made a alloy bracket which is secured to the bonnet lock plate with the pin added. 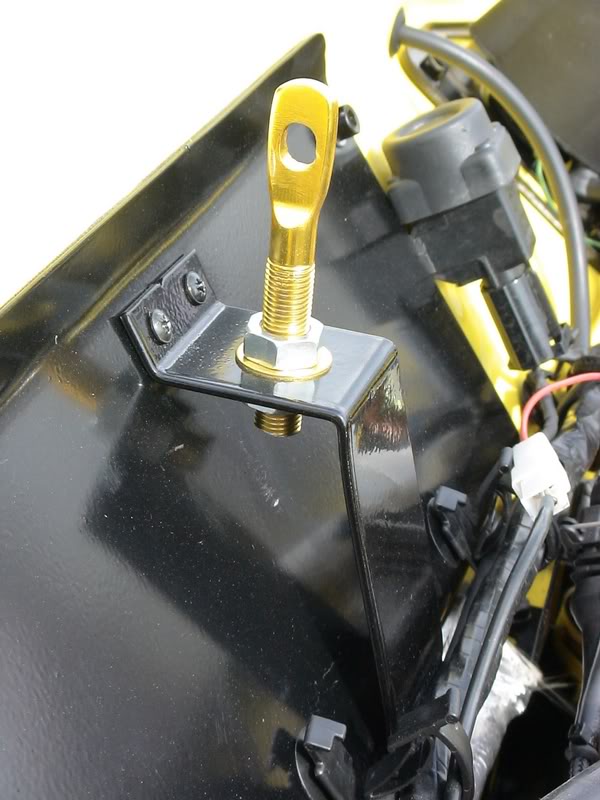 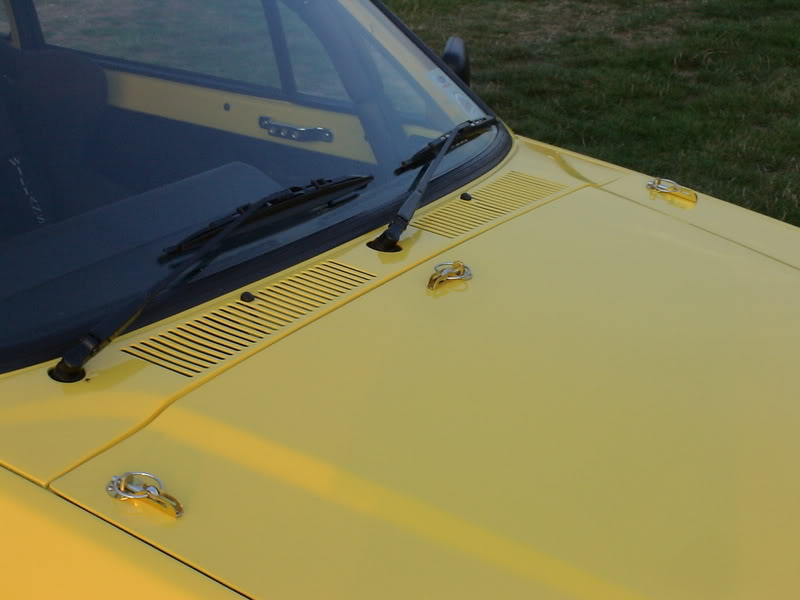 I went for a drive in the car this evening and the bonnet does'nt move anymore which is great.

Just a couple of pictures this evening as the sun was going down. 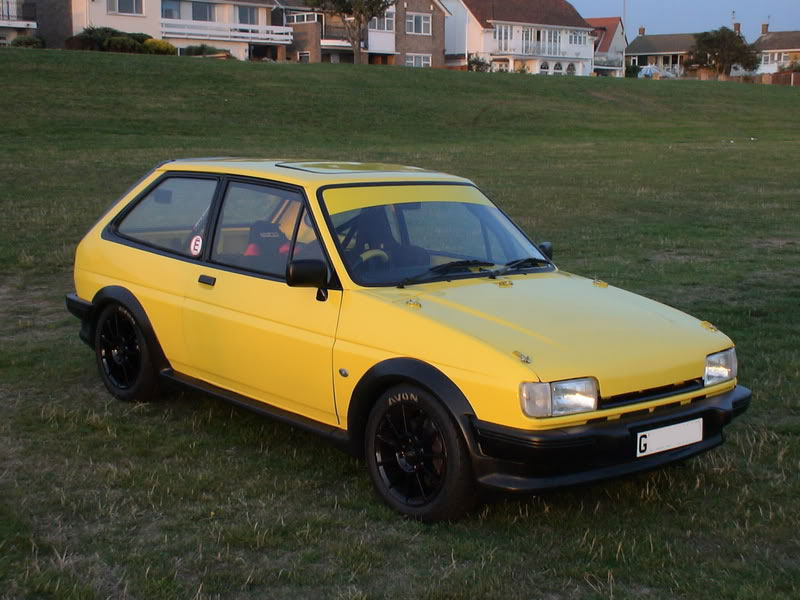 Now for the good new's. PFDave has been after the car for quite a few month's now to feature it in performace Ford mag. But with the problem's I had at the end of the build, and then me putting it off until I was happy with the car. I thought I had better let him have it, or otherwise he may get fed up asking.

He said as he know's them down there, he could possible get it for the day. Well it's now been confirmed that thursday 21st the car will be at brand's. I could'nt of asked for a better venue, and as Dave said that as i've built it for the track, it would look even better there for the feature. We have got the end garage for the day, and will get the moving shot's out on the track.

As you can guess im really looking forward to the day. Got a few mornings to make sure it's spotless, but just got to hope it stays dry Thursday.

Well the feature has been done and dusted. Great day at Brands. It was a bike track day so there was plenty also to watch. We had the end pit garage which was used for the static shot's, and then during the lunch break at 1pm, the camera car and me took to the grand prix circuit.

Started off with shots of me driving down from paddock hill bend round to druid's. Then I was following the camera car around the full grand prix circuit, to get different angled shot's. Then the same again but I was followed.

We then finished of with shots as the photographer was hanging out the side door, taking picture's around the indi circuit.

The pictures I saw on the display of the camera look awesome. I've got no pictures to post up now, but Dave is going to make me up a CD full of the pictures when the magazine comes out. The issue it's going in is the January 07 issue, which will be out at the end of December....I can't wait.

Big thank's to PFDave for organising today. Hope to see you out on the circuit some time next year

One thing I forgot to mention on the last update was that the garage we used at Brand's had the weighing machine inside what the racing car's would be weighed on before and after the racing. Now as my car was on this for the static shot's, it was a shame not to make use of it.

Went to Battlesbridge classic car show today with the yellow XR2. Weather turned out lovely, very sunny and warm. Had allot of people asking about the car, and taking pictures.

I took a few slightly different angle shot's myself of the car, as today was the last show it will be going to and the tax will be sent back for a refund shortly. 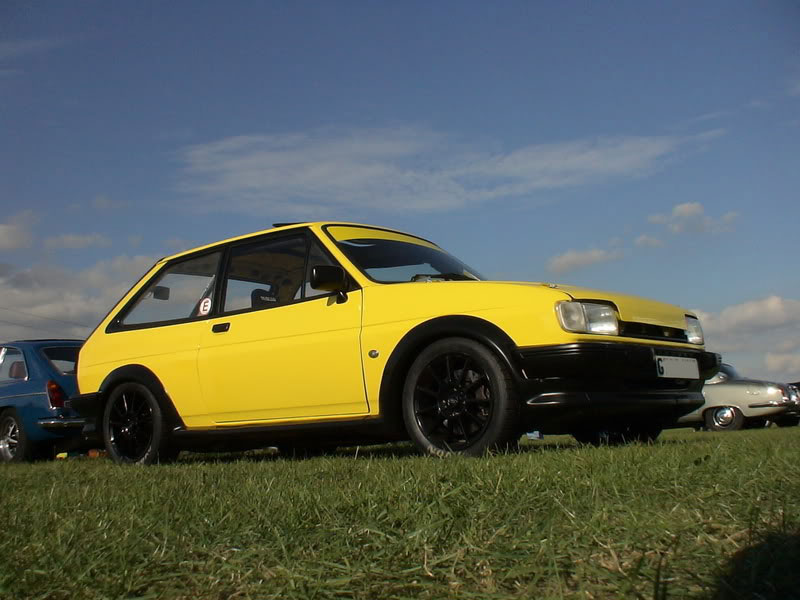 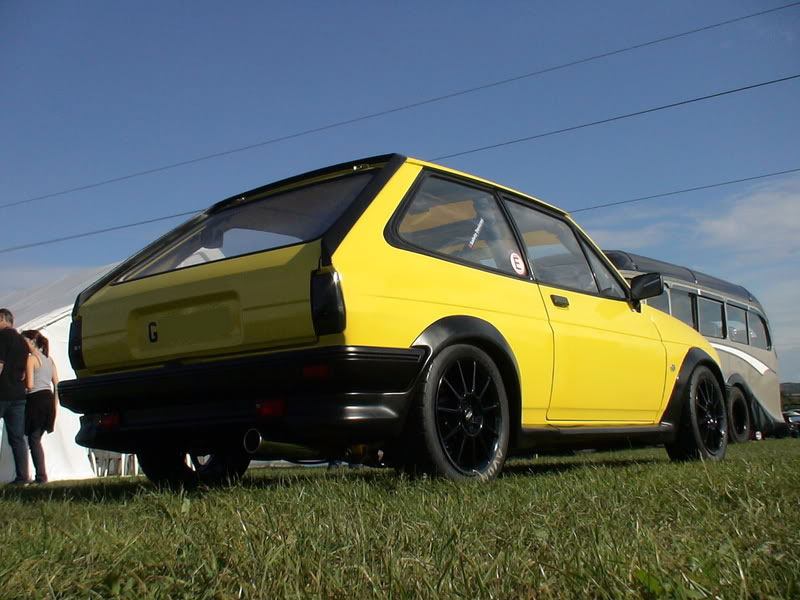 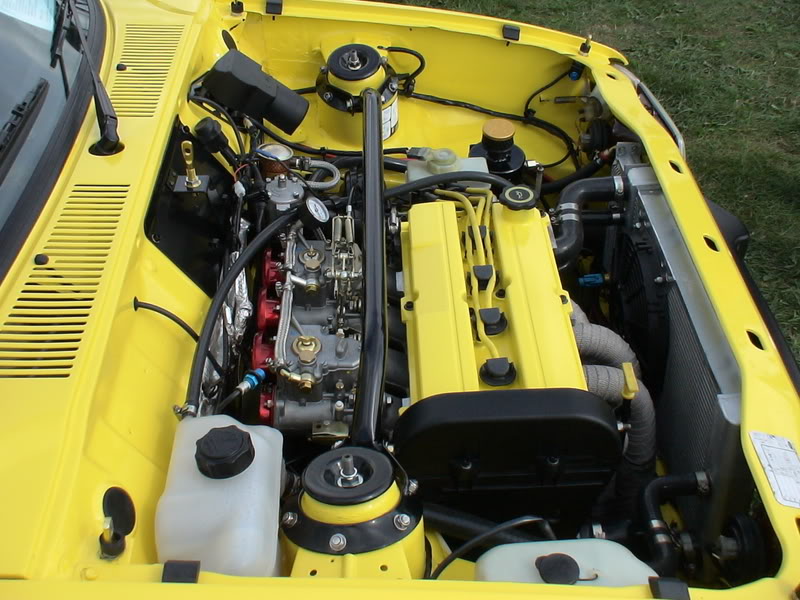 It's about time I updated my thread on the XR2. As im sure your all aware the car is currently in the January 07 issue of Performance Ford magazine. As I have said previously in another topic on here, I was well pleased with the final feature and have had allot of positive feedback for the car.

PFDave sent me a CD-Rom of all the best picture's (thanks Dave). I have asked him if it's ok for me to post up pictures from the disc on the web etc. He has agreed aslong as I refer were the pictures originated.

So below are a selection of my fav pictures which were not used in the feature, kindly supplied and with permission to use from Performance Ford magazine. 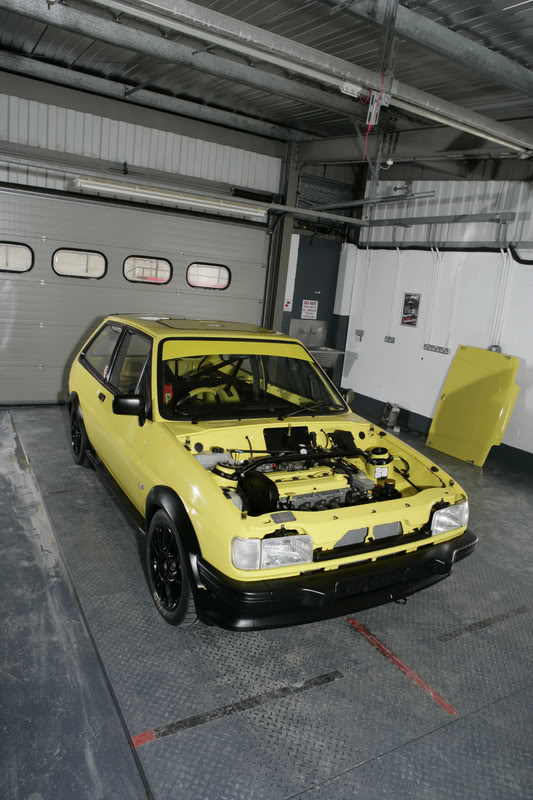 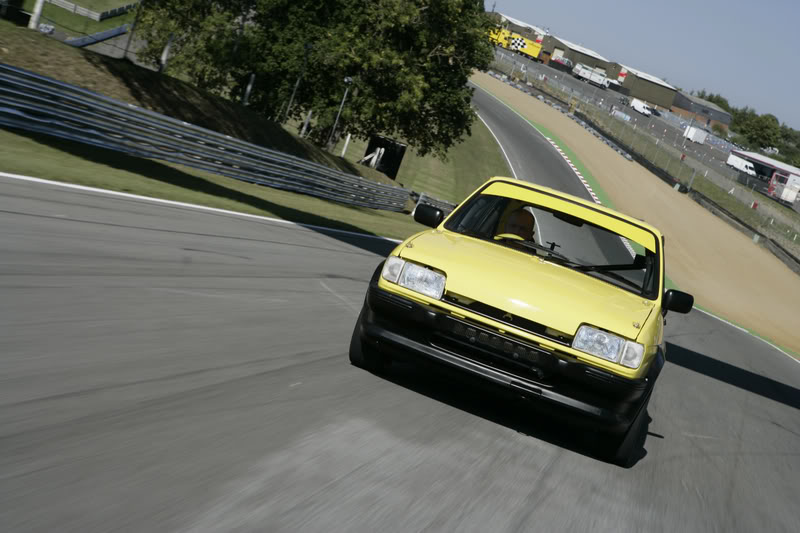 As for the car it's now been of the road for awhile now and is covered up for the winter in the garage. But im still working on it when I get a bit of free time. I've been boxing in the spare wheel side of the boot, as im going to replace the original fuel tank for a fuel cell in this area. As I did'nt want the tank open to the interior (safety etc), im making up alloy sections to incase it in. It's still not quite finished, but heres how it's looking so far. 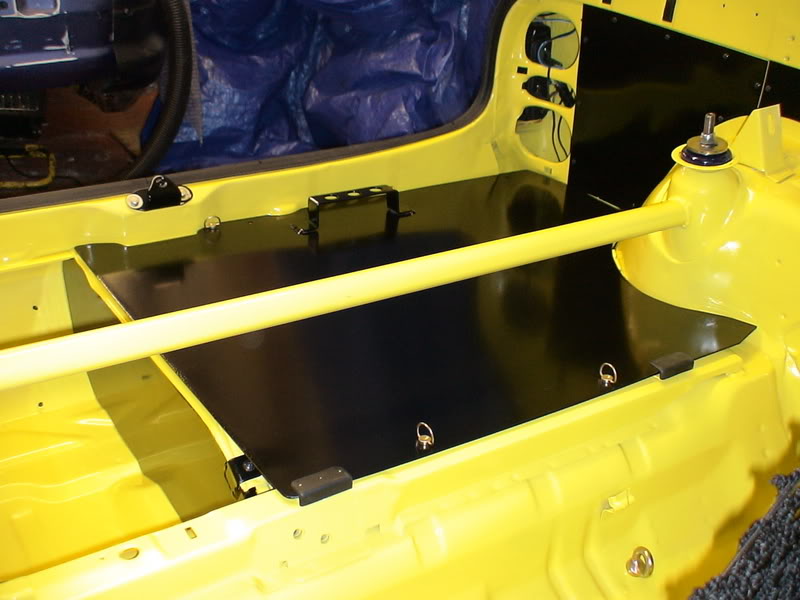 All this is being made out of alloy, and has been powder coated semi-gloss black to match the rest of interior panels etc. It's fixed in place with 4 D-ring dzus fastners, so quick and easy to remove to get to the tank. I've made up a bracket/holder for the Facet fuel pump which will be going next to the tank as well (picture to follow) and in the new year I will have a chat again with Wayne @ Proalloy about tanks and fitting's.

I've also been looking at were I maybe able to shave a bit more weight of the car. I noticed that the alternator bracket is a rather chunck bit of casting. So with a spare bracket, I thought about were to lighten it. And this is what I came up with. 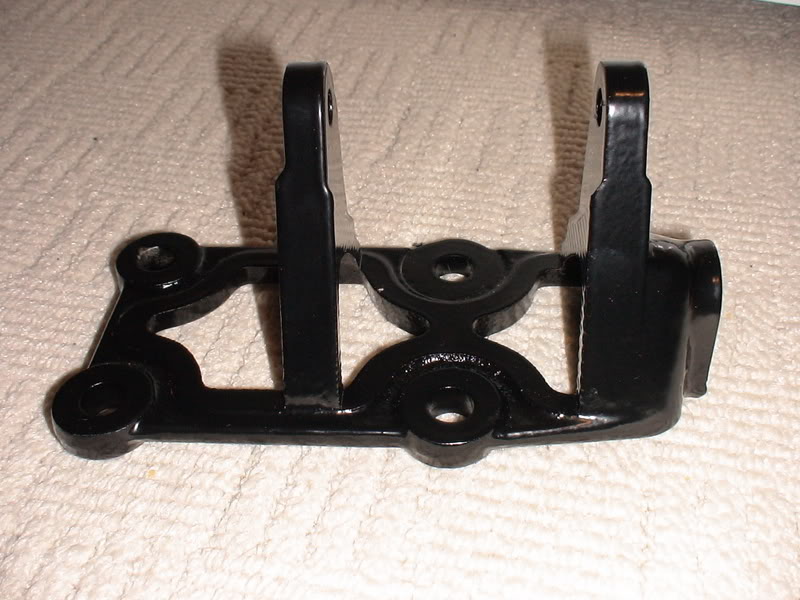 As can be seen in the above picture, i've removed a fair amount of material. But it still retains its strength to hold the alternator. I ended up making three of them in the end, one each for my XR2's and another for a mates mk3 escort trackcar.

That's about it updated now, and as more progress happens I will update my topic.

Just remembered another item I got the other week for the XR2. My mate found this on Ebay and sent me the link. Was a good price and new, not seen one before so I thought why not. 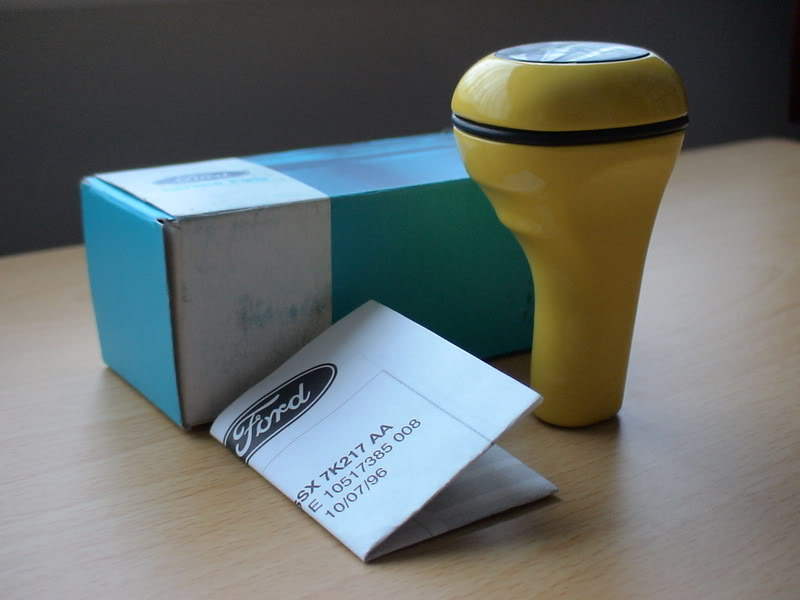 Genuine Ford zinc yellow gearknob which was either fitted to the millennium range (KA,Puma and Focus) or was a option. Not sure if this is going in the car, or to stick with the yellow leather Sparco one in the car now. Will make my mind up when it comes out next year.

I've been spending again, but as it the time of year for sales, and when parts come up at a good price you have to get them when you can. I purchased a few items from 'neilfree' as he's now selling up his mk1, and collection of spare parts. First of bought I was a wilwood knob type bias valve brake adjuster. 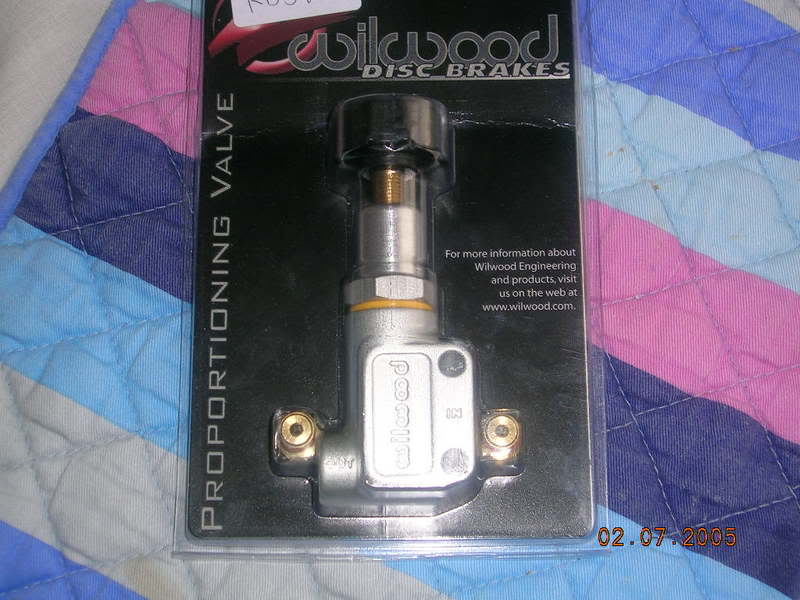 At the time I got this off him I just wanted it to put away incase I ever went for a rear disc conversion on this car. Especially as im running wilwood 4 pot calipers on the front, and it's nice to have the same make component's.

But when I was talking to him he told me he had a complete rear disc conversion as well he needed to sell on. Consisited of the Fiesta center kit, and he had collected the necessary sierra rear calipers, Pads (new), MK3 Fiesta solid disc's (new), and Goodridge s/s hoses (new). Price was agreed, and today I went back to pay/collect the items. 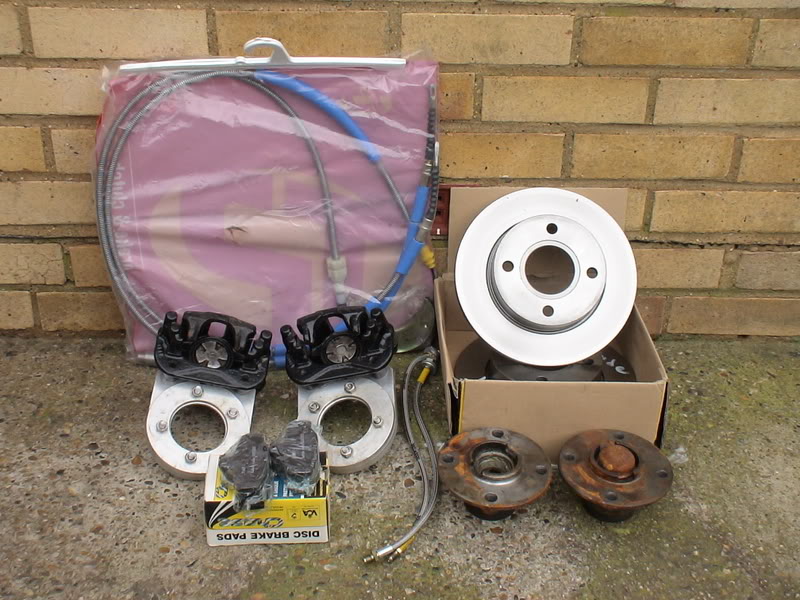 Now im not planning on fitting these to the car anytime soon as i've got to many jobs on the go now. But what I am planning on doing is making up another pair of brackets, as im not 100% happy with the Fiesta center ones. Will use them as a template and make my own slightly different one up. I will also get the hub's and caliper brackets shot blasted and powder coated. The calipers themself have had a refurb kit put thru them already, so I will just tidy up the bodies of them. Also I will get a mate at work to groove the disc's to match the front ones, think this will look allot better. But gradually I will get the kit how I want it, and when i've got time I will fit it all on.

Cleaning up the Sierra rear calipers

Like most people I was back at work last week. So I had a bit of spare time and ground of the lump (arrowed) on the sierra rear caliper's which fouled the FC alloy bracket's. So the calipers have gone from looking shabby, to this with a fresh coat of satin black paint: Next week I will start on the alloy bracket's, and see about getting the disc's grooved to match the front one's.

I went to the autosport show at the NEC yesterday. Not really looking out for anything to buy as most dealers are only showing there wares. But I had some money burning a hole in my wallet, and bought the item below. 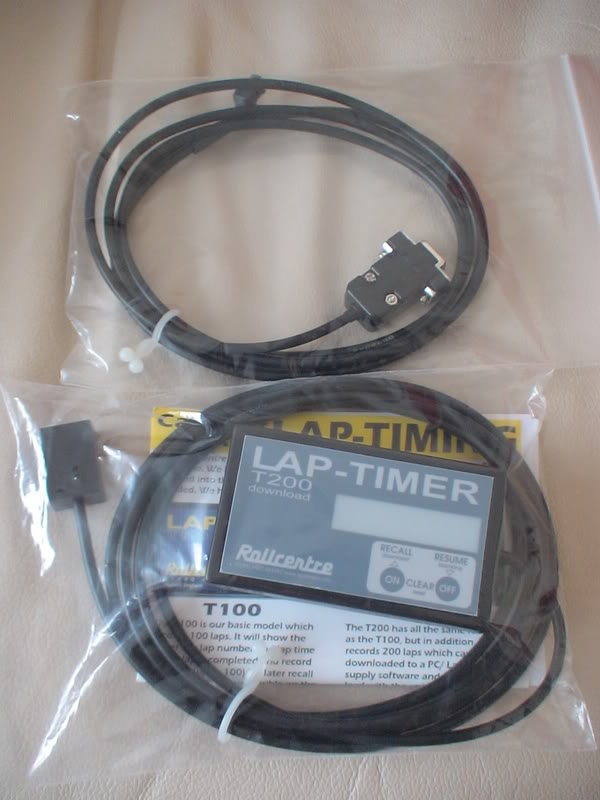 It's a lap timer made by Rollcenter. I've been thinking about getting one for the racer. Be nice to now what lap times I can get round the circuit's, and easy to see if im improving my times. Had a chat with the blokes on the stand, and they were doing them at a reduced show price ( I also got a bit more off for cash). I went for the T200 kit which stores 200 laps max, and is also down loadable onto a pc with the supplied lead. Runs off a 9v battery, so you dont have to hard wire it into the loom. Also it will run off any transponder, so I can either use the circuits transponders if they have them switched on. Or if someone else has one setup on the side of the circuit, I can use there's. But I may buy my own one at a later date, as some of the airfield type track days wont have one, and I dont want to be taking a chance on someone else having one and nobody has. The rollcenter transponders are only £30, so wont break the bank.