Jon from Shawspeed came round around 6ish last night, got the cams in timed up etc, then I fitted a new rocker cover gasket. 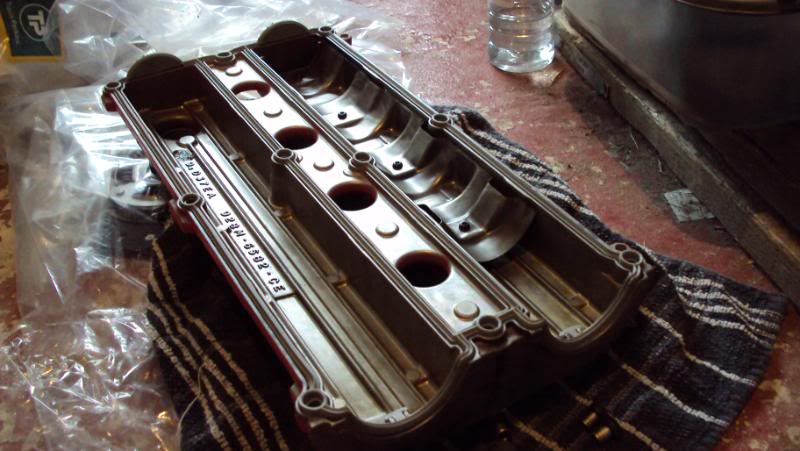 Then cambelt cover on, new NGK plugs and fitted the leads: 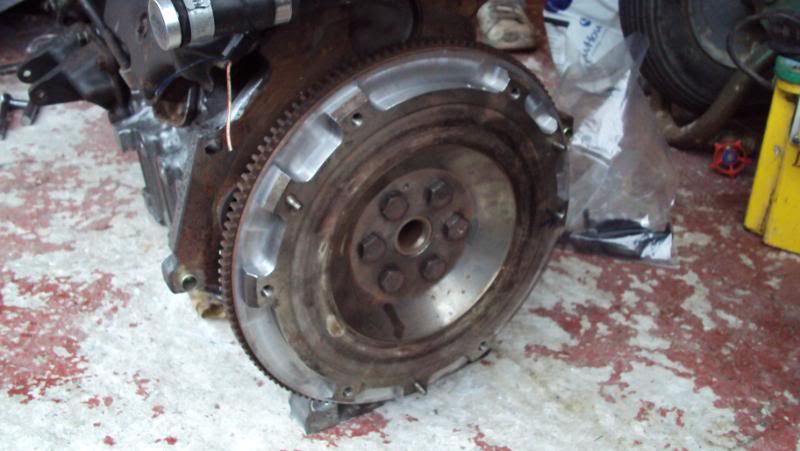 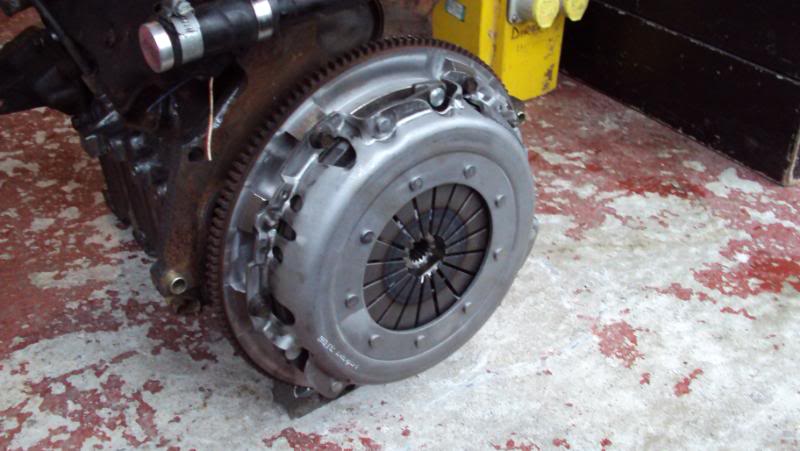 A new Helix release bearing fitted and box ready to go on: 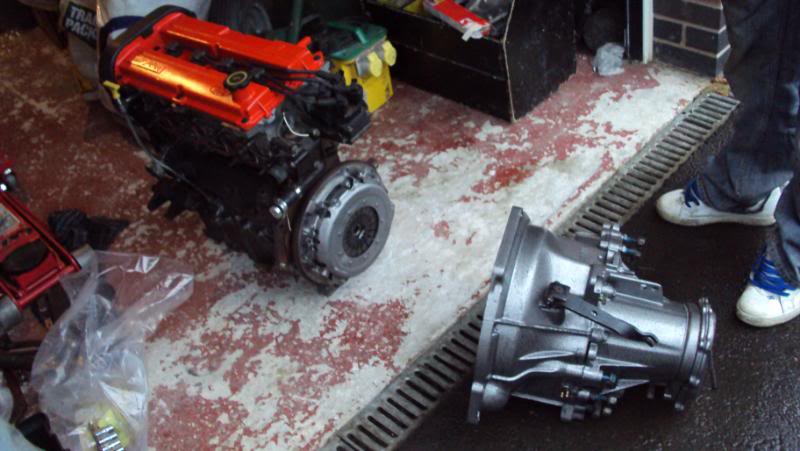 Gearbox on and dragged round to the front of the car (with some idiot): 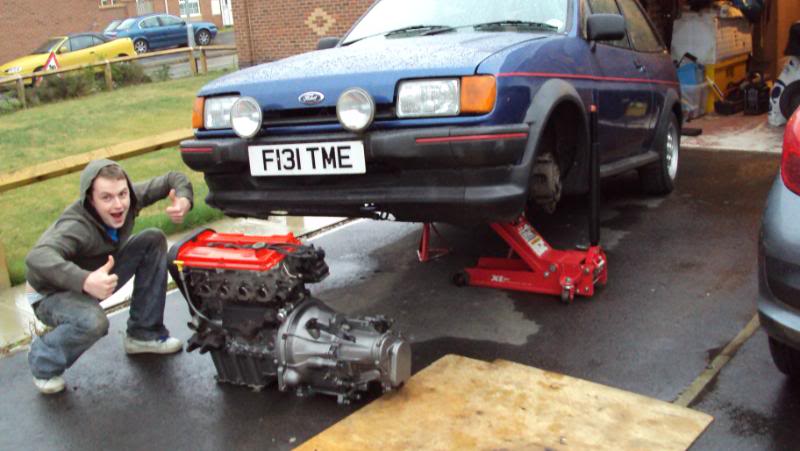 About an hour our later after getting VERY wet we got it in, sorry for the pic as it was taken at around 10 last night:

Just been dodging the rain for the past 2 hours, progress is that the Driveshafts are on, track rod ends are on, nearside ball joint is on, gear linkage is done, speedo cable is done. I went over all the engine mounts again with my socket to make sure everythings tight. Once the rain stops i'll get the offside ball joint/lower arm back on, exhaust manifold on, starter on, oil temp and pressure sensors done and depending on the weather maybe more.

A bit of tidying

Just been out whilst it was very sunny, I had 15mins then it started with torrential rain AGAIN, got the inlet manifold fitted and took some fresh pics. 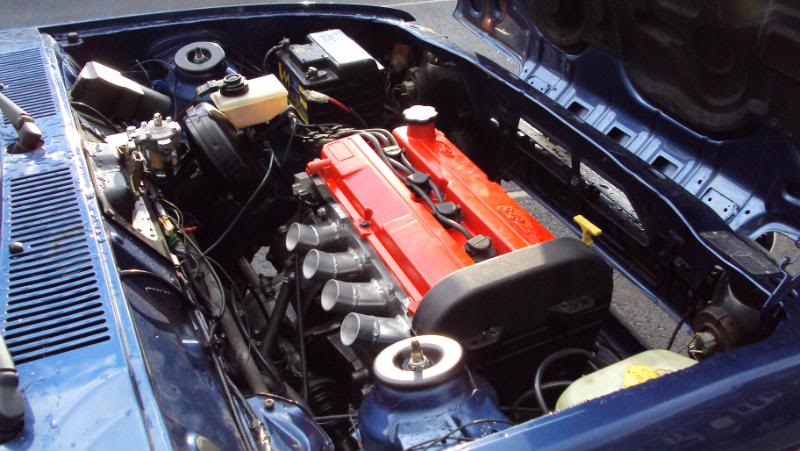 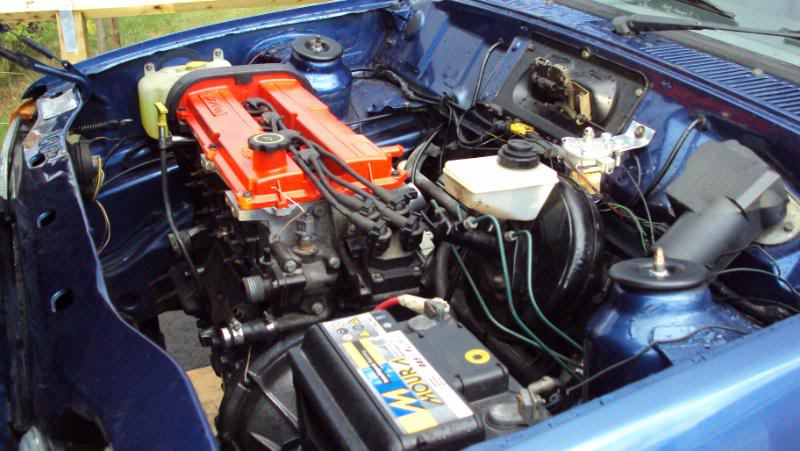 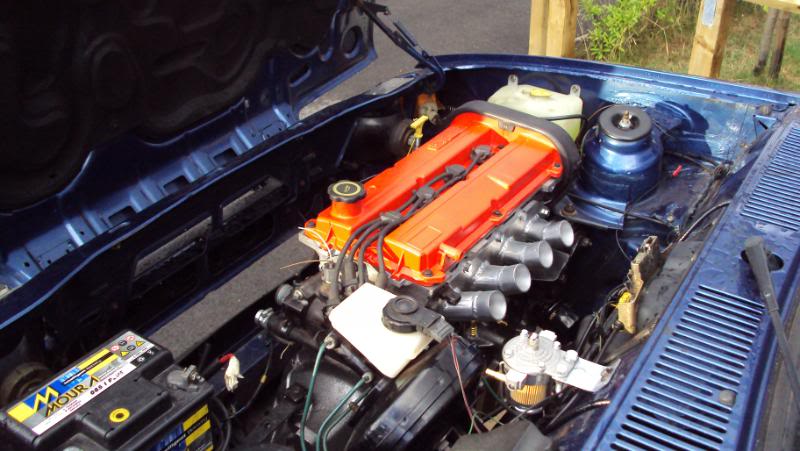 After the rain stopped I piped up the vacuum hose from the inlet manifold to the servo and fitted the oil pressure sender and just generally tidied up the wiring loom where the carbs will be going.

Just been out on the car for the last 3 hours taking advantage of the good weather, Vacuum hose to all 4 inlet primaries done: 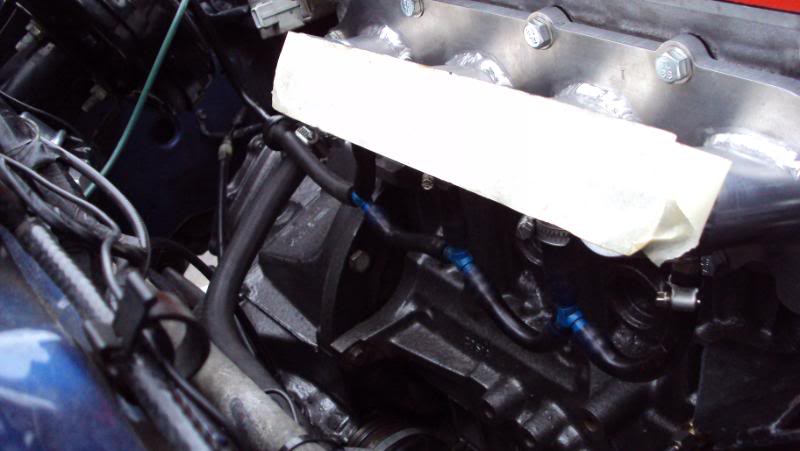 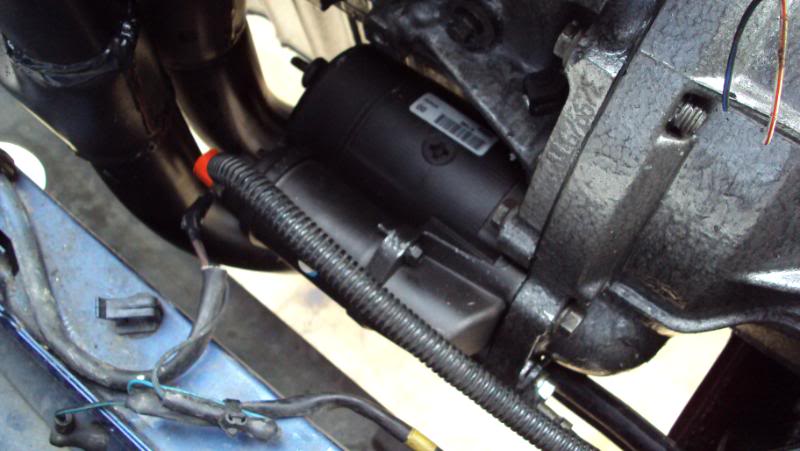 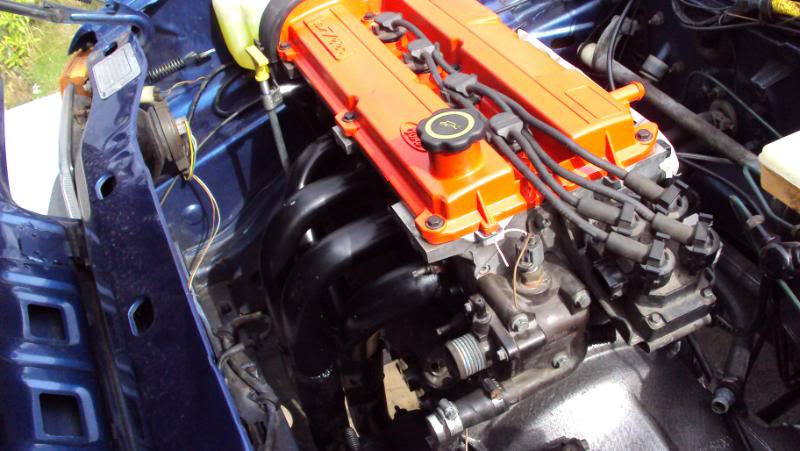 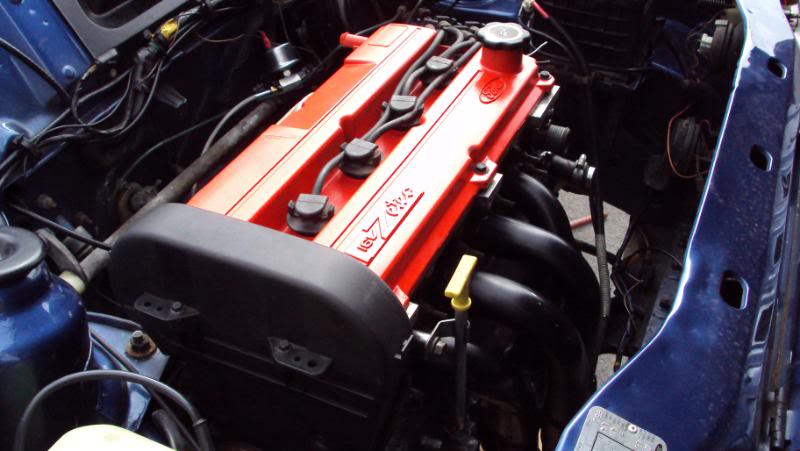 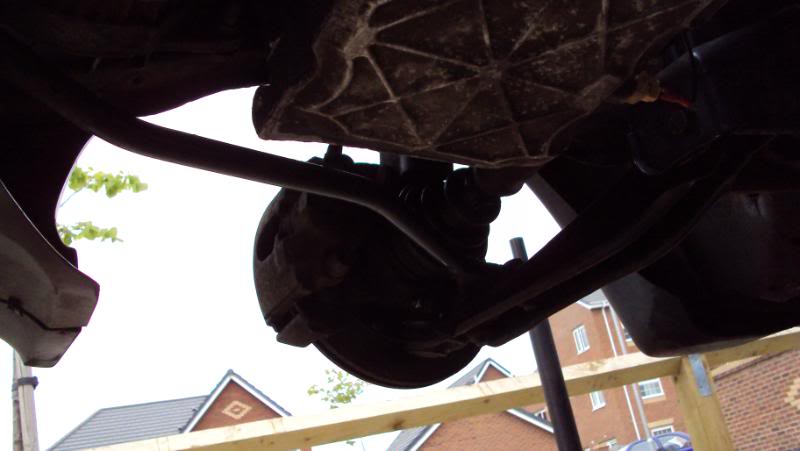 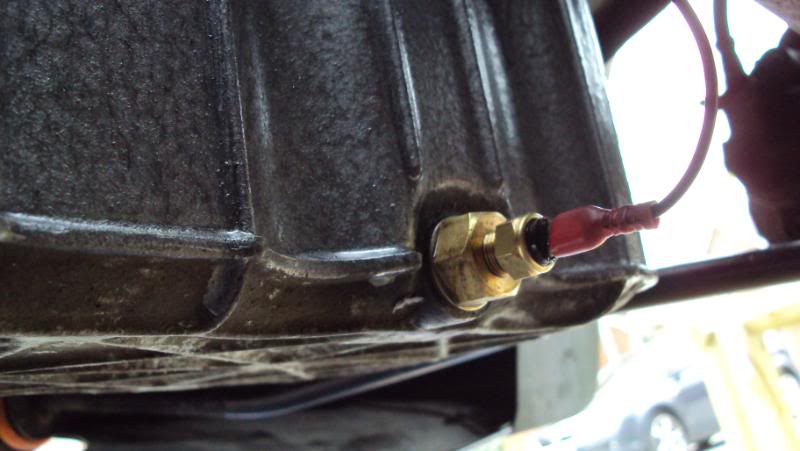 I also did the pressure one but forgot to take a pic.

Wheels on and car now back on the ground: 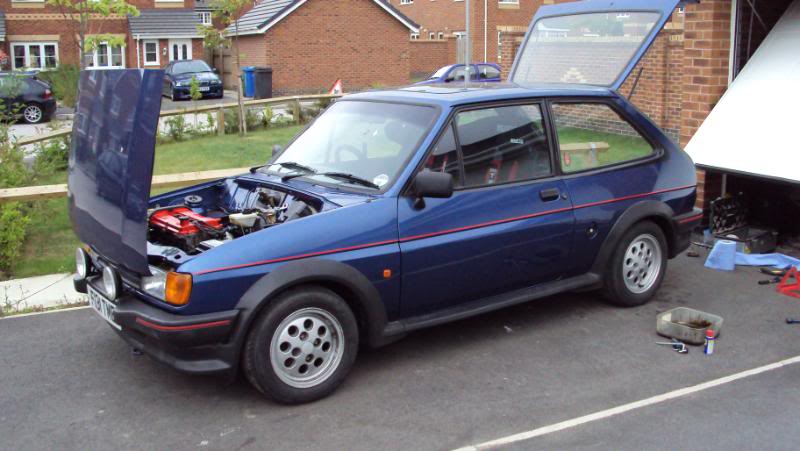 Then I tightened the hub and wheel nuts. You can tell the Zetec's a lighter engine as the car sits 10mm higher at the front than it used to, the trackings a mile out so going to get that done once i get the new tyres on and the wheels checked out to see if they're buckled or not.

In the rain I cut up the exhaust last night and measured up for the section that i needed making as Pipewerx aren't open on saturdays so i needed it doing, so cut this lot out/off: I went to Pipewerx on my way home from work and had this made: 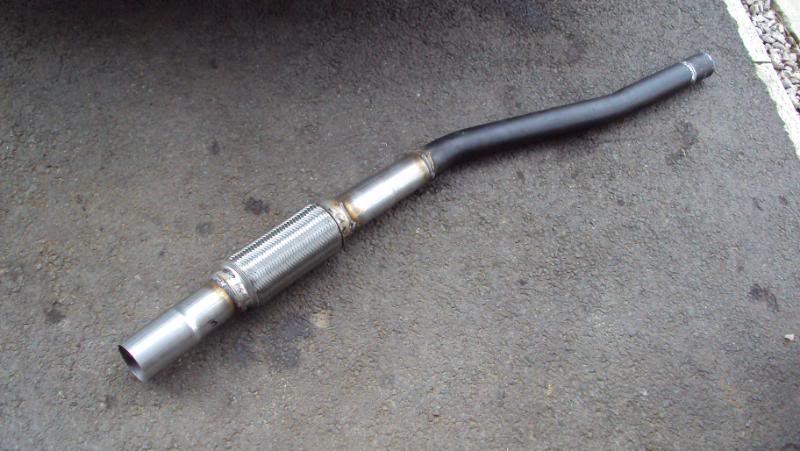 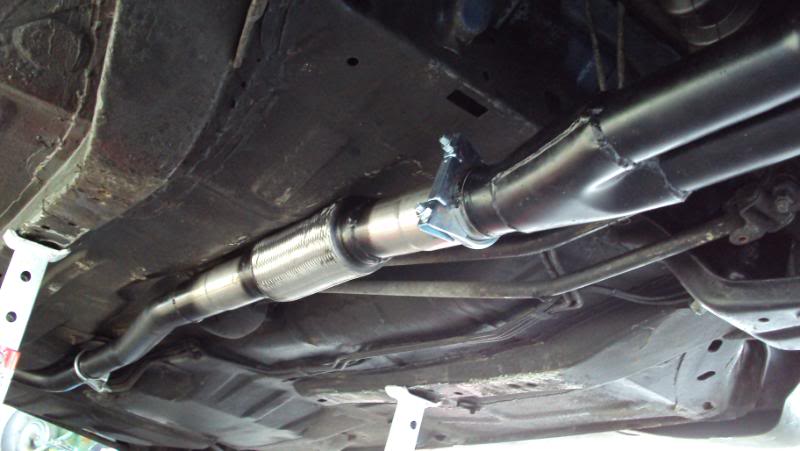 The sleeve and all the measurements are spot on apart from one thing, as you can see the flexi joint is hitting the shell slightly underneath so that'll be irritating vibrating whilst driving, so once it's all up and running and mapped I'll shoot back upto Pipewerx and get it sorted and also get them to make me a 3rd hanger.Theres about 2" of it touching, but when driving under load the engine will pull it away from the car anyways but dont want it wibrating all the time.

I went and got a auxilary belt this morning, got back, fitted that and the alternator: 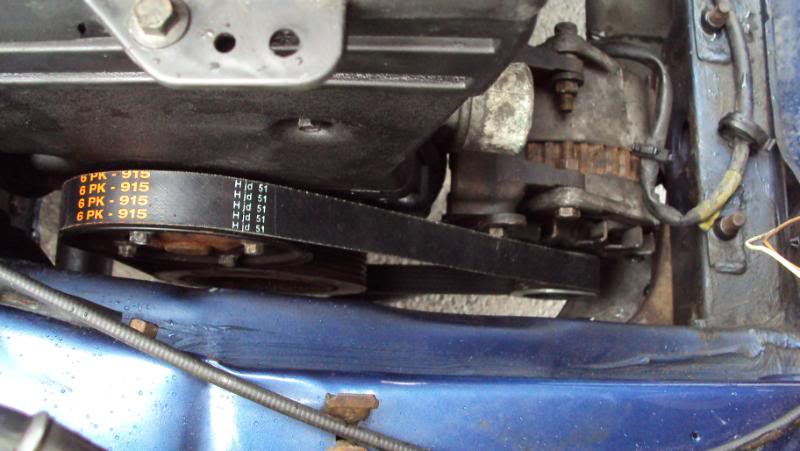 Then fitted the throttle cable making sure I'm getting what when the pedal's all the way down: 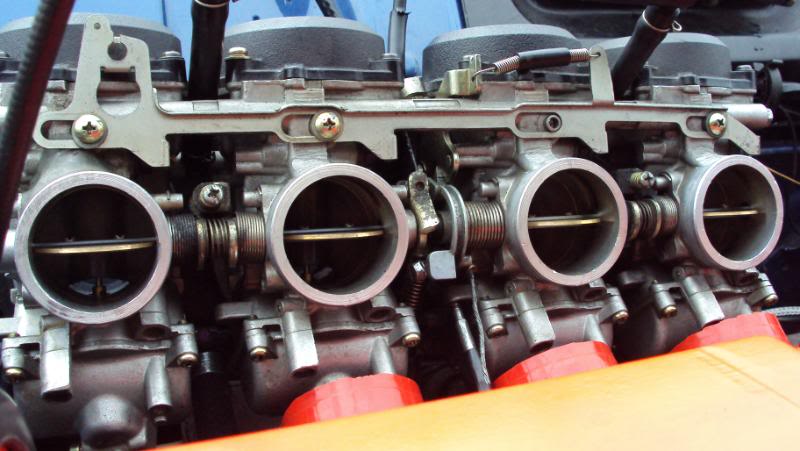 Then cut down the carb hoses to 50mm and fitted the carb: 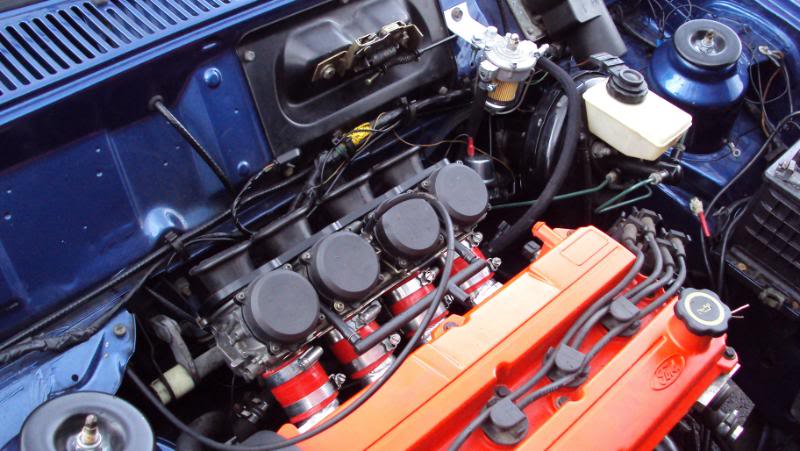 Then fitted the Rad, Fan, header tank, coolant hoses then filled it up with anti freeze/coolant (ready mixed stuff): 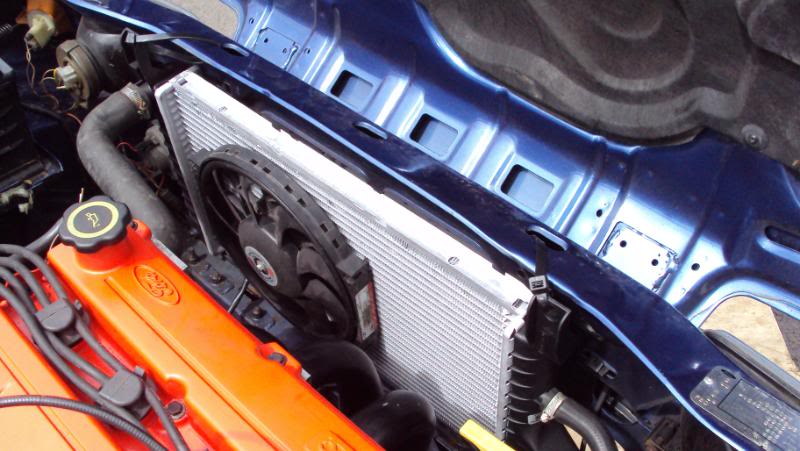 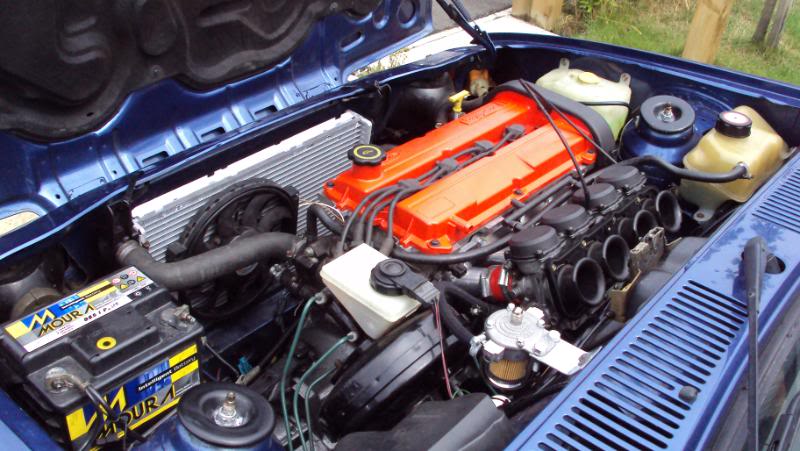 Then filled the engine up with some 5w30 oil and the gearbox with 75w90, fitted the clutch cable and fitted the oil catch tank: 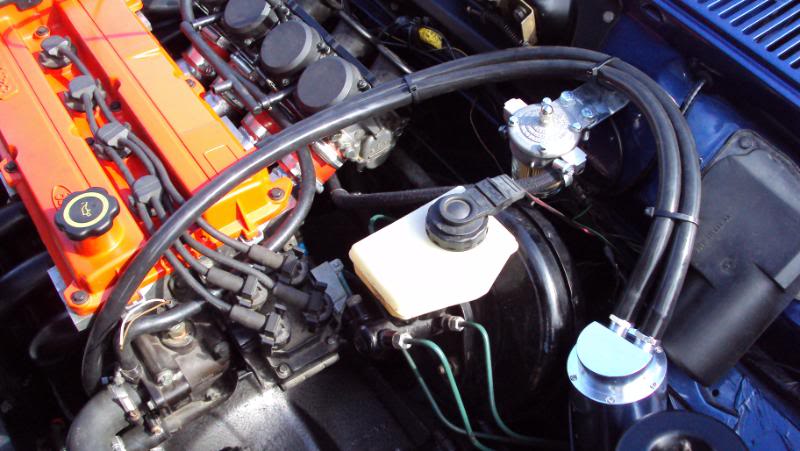 There we are, ready for the omex to be fitted monday then hope it all runs fine: 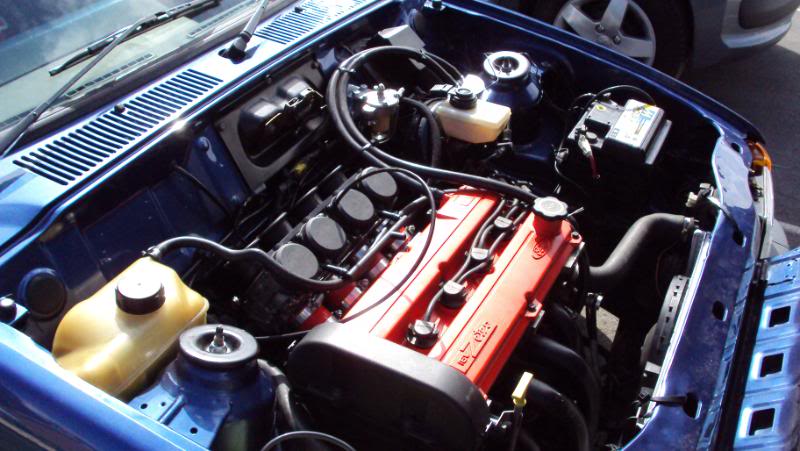 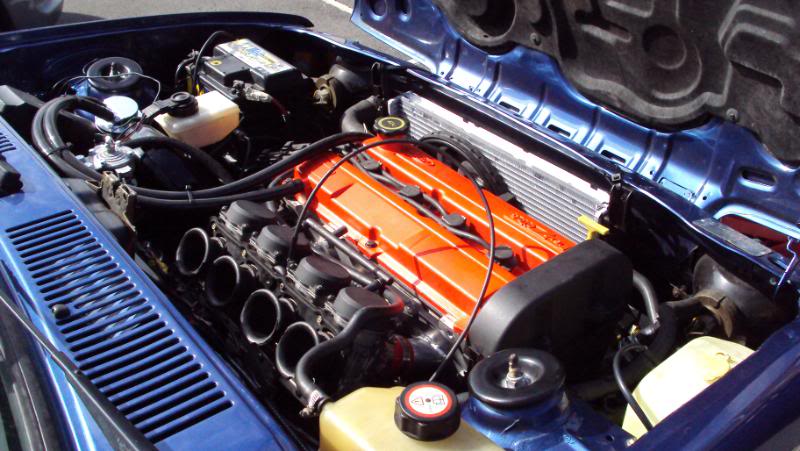 Omex is wired up thanks to jon who came earlier! BUT... I made a big mistake and removed the R1 fuel pump and took it off with the CVH as i thought it was a regulator, so i've just collected that from a friends dads factory where the engine is and i'll be fitting the R1 fuel pump after work tommorow, then the friend is coming to help wire it up for me along with the water temp, sensor for the dash, extend the fan switch wires and wire up my tachometer as we couldnt get the engine turned over fast enough before to show a reading on the tacho itself due to the battery being low so will have to do the tacho once its been bump started. so tommorow itll be a runner if it doesnt rain.

Water temp, fan switch, tacho and fuel pump wired up... now it lives after alot of messing about with problems.

I drove the car earlier, after bedding in the cams and once the coating burnt off the manifold lol... can definatly feel the power's there but I couldnt really feel the power in 2nd as the gearbox REALLY doesn't want to go into 2nd, 4th or reverse... I've tried about 5 different positions on the gear linkage and top chucked an extra 1L of oil in, still no 2,4 or Reverse, may need to adjust the clutch?

Drove the car for 20 odd miles last night, still cant get it into 2nd or 4th happily and cant get it into reverse at all! Also the auxilary belt chewed 1/2 way thorugh the cam belt cover as I took the pulley spacer off the alternator, just re-fitted that back on and its fine now... the tapping has stopped and sounds smooth now, altho the engines smoking a little and the manifold is blowing form the 4-2 collar (crap ashley). Oh.. and Mappings booked for Monday.